The partnership between the Hasidic movement and Modern Orthodox yeshiva is an unlikely one. 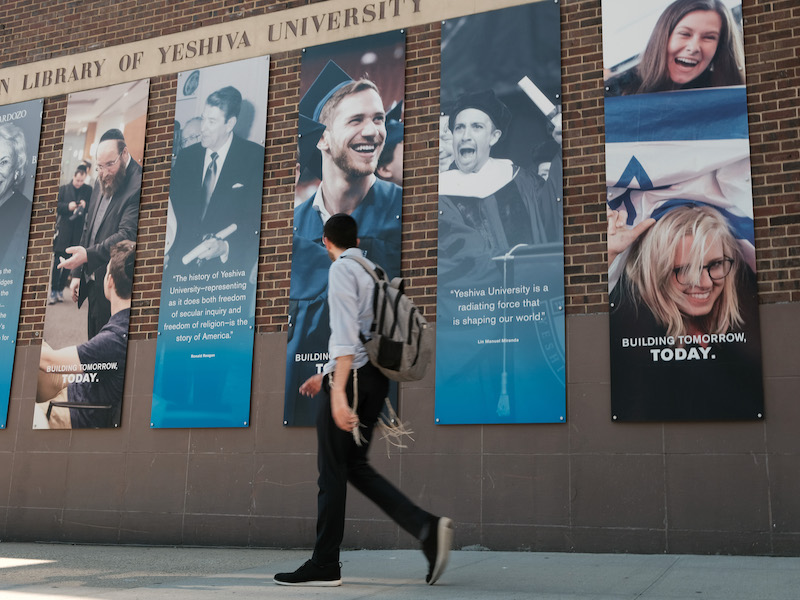 A man walks by the exterior of a Yeshiva University building in 2022.

For a little over an hour per week, high schoolers across the country will gather in Jewish youth group spaces to stare at a screen.

But they won’t be leveling up in a video game. Instead, they’ll be earning college credits in a program jointly administered by two of the most prominent organizations of American Orthodox Jewry: Chabad and Yeshiva University. The program, run through CTeen, the Chabad youth group, is called CTeenU and offers Jewish studies classes to high schoolers across the country.

“My competition is not other Jewish organizations, our competition is really… Snapchat, Instagram, Netflix, Hollywood,” Rabbi Mendy Kotlarsky, director of Merkos 302, which oversees the CTeen program, told eJewishPhilanthropy. “Each age group has their trillion-dollar industry that’s chasing the attention and the time and the focus of this demographic.”

For those familiar with American Orthodoxy, it’s an unlikely partnership. Chabad is likely the most well-known Hasidic movement in the country, while Yeshiva University is the flagship institution of Modern Orthodoxy. Its roots are in the world of the Lithuanian yeshiva, not Hasidic mysticism.

But after launching at the start of the 2019-2020 academic year, the Chabad-YU partnership has offered accredited classes on Jewish law, business ethics and philosophy to nearly 1,000 teens. Now, it’s also offering a class on Israeli history and advocacy. And while Chabad and YU come from different Jewish philosophies, professionals at both say there’s much in common when it comes to teaching about Judaism.

“I don’t think it’s a chiddush [novel idea] to say that Chabad and Yeshiva University are very much aligned,” said Rabbi Yosef Kalinsky, the dean of undergraduate Torah studies at YU, which is largely in charge of YU’s morning Jewish text studies. “We both deeply care about young adults, and the future of the Jewish community, and doing whatever we can to further advance the Torah, Torah values and Jewish families.”

The genesis of the program came several years ago, when CTeen ran into the fundamental challenge of Jewish teen engagement.

“It was really, really hard to get a teenager to a Jewish educational class,” Kotlarsky told eJP. “How do you get teenagers to agree to come to another two-hour course when they just finished homework?”

The answer CTeen settled on was to appeal to high school students’ college aspirations, and create a program that would offer classes where they could earn college credits.

“Chabad has always been really willing to adapt to new technologies, that’s part of its DNA,” said Shayna Weiss, associate director of the Schusterman Center for Israel Studies at Brandeis University and a member of the Haredi Research Group, a new collective of scholars who study Haredi Jews.

But CTeen couldn’t run an accredited college course on its own. “Chabad just isn’t set up for that,” Weiss said “They don’t run a university.”

Instead, the classes are taught by YU faculty, who put together a curriculum based on ideas that Chabad staff members suggest. Much of the marketing and recruitment for classes is done by Chabad, with roughly 76 CTeen local clubs involved in courses this semester. The classes are remote but live, with teens gathering at the CTeen clubs to attend lectures in real time.

There are no required readings or homework assignments, just a midterm and final exam, and students can choose from three course lengths: seven weeks for one credit, 14 weeks for two credits, or 21 weeks for three credits, with 75 minutes of instruction each week.

YU has “to give us the parameters of what would constitute a course,” Kotlarsky said. “We have a team that works together with [YU faculty], that goes over and adds and refines… to make sure that the content is within line of our accepted approach.”

While the CTeenU program is still relatively small and costs $1,399 for the full 21-week course, Chabad and YU see it as a success and plan to bring more teens in by subsidizing the cost. “It’s an uphill but scalable model to hundreds of cities to empower these teenagers,” Kotlarsky said.

This semester, CTeenU’s course listing is marking another shift for Chabad, as the program offers a class called “Israel and Me,” billed as a way to teach teens about the Jewish connection to the land of Israel and how to understand media discourse around the Israel-Palestinian conflict.

An overview of the final lesson in the course also takes its curriculum beyond that of a regular history class. The class is titled “Stand for Israel,” and is described as “an in-depth training on how to become the Jewish homeland’s most articulate and confident advocate, on campus and beyond. Because if you’re not at the table, you’re on the menu.”

Chabad has not typically been involved in outright Israel advocacy, and as a movement has historically avoided associating with overt Zionism and pro-Israel engagement. In part, this has to do with the traditional Haredi discomfort with the idea of a secular state in the historical Land of Israel. Rabbi Menachem Mendel Schneerson, the longtime leader of Chabad known as the Lubavitcher Rebbe, who died in 1994, reportedly told yeshiva students that, “If Israel is a state of Jews, then I am not a Zionist, but if it’s a Jewish state, then I am a Zionist.”

At the same time, Chabad has maintained close ties to Israel, with Israeli leaders having regularly come to meet the Rebbe. More recently, the movement has organized Birthright groups and other trips to the country for Jewish students.

“While you can’t say Chabad was classically Zionist, there’s always been a strain of Chabad that’s been very, you could maybe call it pro- the Land of Israel, pro- the people of Israel, in a way that other Haredi groups, especially other Hasidic groups, weren’t,” said Weiss.

Kotlarsky echoed that idea. “Our relationship with Eretz Israel [the land of Israel] is part and parcel of who we are as a people,” Kotlarsky said. “Obviously, that took a turn and… there’s a whole added element to that, once there’s a state of Israel.”

The “Israel and Me” course grew out of feedback from students during the May 2021 conflict between Hamas and Israel in Gaza, and the corresponding rise in antisemitism and anti-Israel discourse that many teens experienced, Kotlarsky said. “We started seeing the reality on the ground that this is an area where the teenagers themselves need to be empowered and educated for themselves,” he said.

Despite the class description clearly identifying it as an Israel advocacy training, Chabad hasn’t changed its position, as a movement, on Israel and Zionism, Kotlarsky said.

“I wouldn’t make a broad statement that we’re not Israel advocates, at the same time I wouldn’t say that we are Israel advocates,” he said.  “Chabad cares for all the Jews and for everything that goes on in Israel, [but] I don’t think that we are the lawyers and spokespeople for the Israeli government… At the same time, like any Jew cares about a place where half the Jewish people are… there’s a few conversations that have to be had. And for a lot of these teenagers, this is the only place that they can turn to to get real information.”

Alongside the history of Israel and antisemitism, the course includes lessons such as “The Other Side to the Story” (“peek into terrorists’ indoctrination and see the danger for yourself”) and “Faithful and Fortified” (“peace can’t threaten a country’s safety. All for security first, peace second, respond with the thumbs up emoji”).

Kalinsky, the YU dean, contended that while the expected result of the course was for teens to become better Israel advocates, at its core it’s a Jewish studies class, not an advocacy seminar. The majority of the class, he said, is “a very, very rigorous curriculum, going through hundreds, if not thousands, of sources… it’s not an advocacy course, per se. It’s not a lobbyist course…it’s a Jewish studies course.”

“There are 14 sections to the course and that topic is discussed on week number 14,” he told eJP. If students take the whole course, he added, “They will be prepared and armed with hundreds of sources [so] that, if [and] when they end up on a college campus that is not Yeshiva University, they can respond and advocate on behalf of the Jewish people and the land of Israel. So the advocacy is a natural outgrowth, but the main thrust is the historical and philosophical background, the knowledge.”