Turns out, disappointment in Jewish rituals and response to divorce from our synagogues and schools has been the case for most divorced/divorcing Jews, including Jewish clergy.

My teacher, colleague and friend, Rachel Brodie z”l, died recently. As I tended to my sadness and showed up to support her family at the funeral and shiva, I reflected on how she helped me become a better Jewish educator including on my latest project: Divorce and Discovery: A Jewish Healing Retreat. It will run for the first time this fall at Camp Tawonga. Rachel kept binders of articles and ideas on a huge number of Jewish education topics – she was, after all, the Jewish educators’ premier educator. She generously shared her learning and resources with all of us.

Over lunch at her house last December, she opened the binder she had compiled on Jewish divorce and let me scan every article and program in it. She and her “husband emerita,” as she called Adam Weisberg, Urban Adamah executive director, wrote one of the best community decoupling letters I have ever read. It was a sweet and informative letter describing the change in their relationship in the context of other pivotal life changes – like the birth of two children, the death of two mothers, the move to the Bay Area. They sought to continue as family and friends, though not as a married couple. 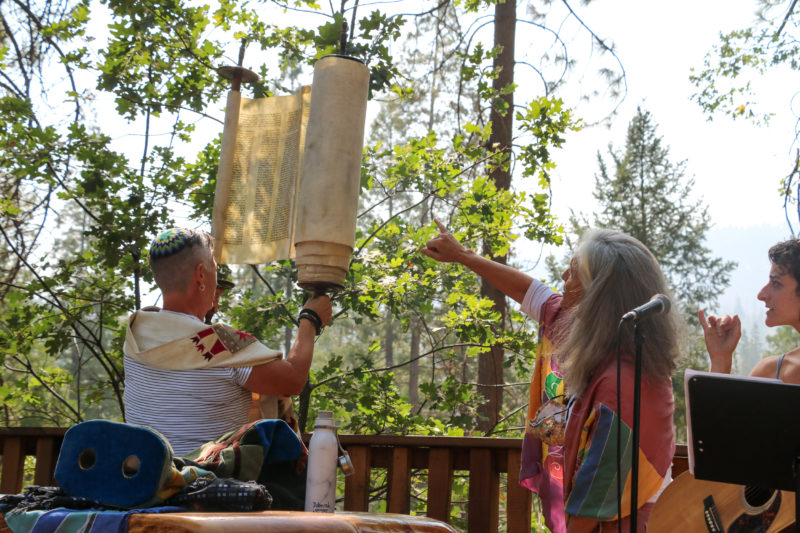 My ex wife and I could not have written such a letter at the time of our separation. We did not come to a mutual decision to end our marriage, and though we were lesbians on the cutting edge of LGBTQ leadership in our Jewish community (as the first out resident Jewish summer camp director in the country and the first openly lesbian clergy hired at Congregation Emanu-El in San Francisco), our good intentions and our marriage failed. I was sad for a year. Over time, my ex and I have untangled our feelings. Today we are good friends, consider each other family, and have always been excellent cooperative co-parents of our two sons. I introduce her as my “starter-wife.”

Meeting and dating my current wife a year after my marriage ended helped tremendously with my healing, and if numbers matter to you as they matter to me, in August 2022 I will have been with my new wife for 15 years, the same number of years I spent dating and married to my starter-wife.

Since my starter-wife is a rabbi, I knew lots of rabbis at the time of our separation. They came to our house for dinner; we went skiing and camping and hiking together. I reached out to no fewer than five of them asking for help in navigating my divorce grief through a Jewish lens, and strangely, they had nothing to offer. They said, “You can get a get.” (A get is a Jewish legal divorce document).

Where was the “Divorce Mikveh” or the “Divorce Havdalah” at the synagogue? What about the community “Divorce Tashlich?” Where were the prayers (later written by Rabbi Naomi Levy) asking God for help to heal from anger and hurt at the end of a marriage? Or Rabbi Laura Geller’s idea of changing out the mezuzah into the bedroom, maybe even writing your own klaf (the interior parchment of a mezuzah containing prayers like the Sh’ma and V’ahavta)? These ideas were nowhere to be found. I was on my own. I had to turn to the secular world for support and comfort.

Turns out, disappointment in Jewish rituals and response to divorce from our synagogues and schools has been the case for most divorced/divorcing Jews, including Jewish clergy. In a survey I created last year to better understand how to fulfill the needs of folks going through divorce in the Jewish community, I asked about satisfaction with Jewish paths to healing from divorce and discovered not one respondent was satisfied. Like me, they looked for therapy and grief retreats outside of the Jewish community. It became clear to me that Jewish folks facing divorce today seek a community of people going through the same thing and are hungry for Jewish ritual and wisdom texts about divorce.

So, as a capstone project for my rabbinical school requirement in innovation, I created Divorce and Discovery: A Jewish Healing Retreat. As far as I can tell, there isn’t a program like it anywhere in the world. The purpose of the retreat is to help people who feel broken or in pain from the ending of long-term relationships find their way back to wholeness – guided by Jewish healing rituals, communal support and professional expertise. Rabbi Akiva, one of our Talumdic Rabbis, taught us that divorce is not a tragedy but a remedy for a marriage fractured beyond repair.

Thanks to Rachel Brodie’s binder, I found all kinds of Jewish divorce rituals innovated by some of our local clergy, including Maggid Jhos Singer and Rabbi Menachem Creditor, along with a wonderful thought piece by Rabbi Alan Lew of blessed memory. And though Rachel was not up for working the retreat in the rustic wilderness of Camp Tawonga (she called herself “the great indoors woman”), her enthusiasm for the idea was all I needed to know that there is a real need for this offering in our community.

At the retreat, we’ll use prayer, Jewish text, rituals and communal practices to support participants on their journey to feeling whole again. In Pirke Avot, the teachings of the ancestors, Rabbi Tarfon said: “It is not up to you to finish the task, but you are not free to avoid it.” We hope that those who are struggling in their divorce process find some healing in our offering – and that Divorce and Discovery is just the beginning of a helpful Jewish response to divorce.