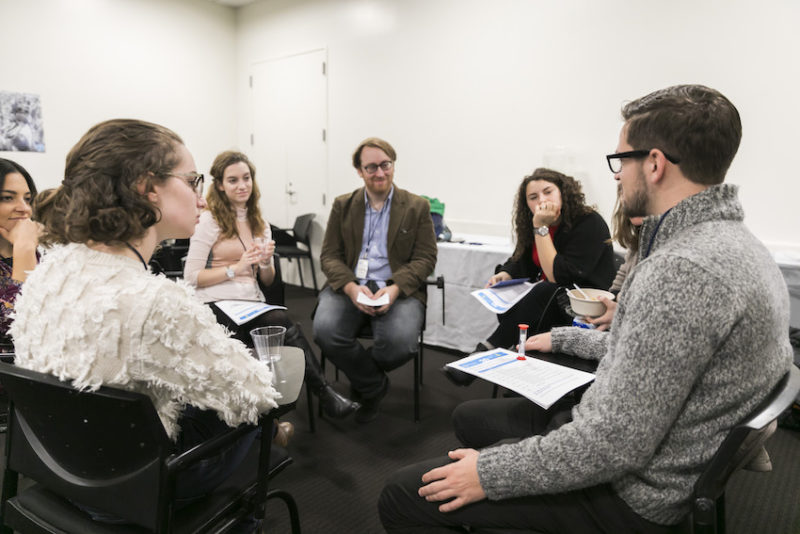 As a youth fellowship program and alumni network that has been grappling with religious differences, Zionism and other “stimulating, existential questions,” since 1987, the Bronfman Fellowship has seen its share of heated discussions.

Yet not until this past year has the staff witnessed such extreme ideological tensions, both online and in person, that they were forced to make programmatic interventions. The group is now offering enhanced training in pluralistic practices and has developed a working group to propose solutions for an increasingly contentious listserv, Becky Voorwinde, the fellowship’s executive director, told eJewishPhilanthropy.

To help the fellows better practice pluralism, the fellowship staff developed its own curriculum. For alumni, they hired an outside expert to deliver an online discussion series titled “Where Pluralism Thrives.” It has also created affinity groups with their own listservs for alumni who are LGBTQ, Mizrachi, Sephardi, Jews of Color or parents who might have specific interests, concerns or perspectives that they feel less comfortable expressing in the main forum.

“Some of the areas of disagreement got hotter, more personal,” among the 2020-2021 fellowship class of 26 high school juniors, Voorwinde said, with the participants becoming more likely to attribute ideological opponents’ views to malign motives.

The fellowship’s staff also started to observe disagreements between its 1,400 alumni — both on campus and on its alumni listserv — that seemed to produce increased polarization and hurt feelings instead of insight and understanding, she said.

Many organizations support alumni networks, from Birthright to Camp Ramah to ROI Community — the goals being to support the program and to stay engaged with past participants.

Disagreements among alumni have flared and subsided over the years, said Ryder Kessler, an alumni of the 2003 Bronfman Fellowship. “Some conversations have gotten tough. Some people have quit the listserv. Others have said there should be moderators, or certain topics should be off-limits.”

On the whole, though, the listserv remained an asset that enabled various community members to productively disagree with each other, he said.

Unhealthy dialogue started to become increasingly frequent and painful in alumni networks across the country due to the political polarization that emerged during the 2016 presidential election, and it persists today, said Chris Marshall, an alumni relations consultant, who noted that such disagreements became more “heated, intense and divisive.”

“If we truly want a wide spectrum of folks in the room, a little bit of discomfort is healthy. That’s a big part of our philosophy,” Voorwinde said. “But the dehumanizing tone online was a problem.”

The businessman and philanthropist Edgar Bronfman founded the fellowship, which takes its participants to Israel, to foster open conversation between Israeli and American Jews. The breakdown of civil discourse signaled a threat to the integrity of Bronfman’s vision, Voorwinde said.

Voorwinde and the program staff started to worry that the conflicts between fellows and alumni were reflective of those across the Jewish community that might complicate the organization’s efforts to create a diverse fellowship class. Jewish critics of Israeli policies asked why the fellowship required travel to Israel. In the Orthodox community, people committed to a more full-throated embrace of the Jewish state wondered if the fellowship could truly support Israel while also fostering conversations that challenged some of its values and decisions.

“Pluralism is at the core of our entire mission and our entire program, and COVID exacerbated the existing political polarization,” she said.

The increasing frequency of acrimonious conversation among alumni also prompted a concern that even as the network became more diverse, with increasing numbers of LGBTQ Jews and Jews of Color, those groups were feeling less welcome due to the heated atmosphere on the listserv, Kessler said: “An unfettered conversation isn’t necessarily one where all voices can be heard to the same degree or where all voices can be validated or explored.”

The working group focused on the listserv decided the best way to change the tone, while not squelching the conversation, was not to add a moderator but to find alumni who could commit to participating consistently in a way that models healthy debate, said Kessler, who served on the group.

Bronfman’s approach shares several of the elements Marshall has seen and suggested in his work as a consultant, he said.

He and his clients have had success with a strategy that combines an articulation of new norms for the entire group with private outreach to the individuals who are at the core of the most intense debates.

Voorwinde said the fellowship has a team of volunteers and staff who have reached out directly to individuals who have posted to the listserv to check on their well-being, to encourage them to make space for other voices and to suggest that they “take hard conversations off the list” and have them in a more personal way, whether that means a phone conversation or a meeting.

In Marshall’s work, some alumni networks experiencing these challenges have gone so far as to eject certain members from their forums. Voorwinde said the Bronfman Fellowship has not done this, and doesn’t anticipate needing to do so.

“While the medium has its failings, it’s almost like a piece of infrastructure that’s damaged and needs more bolsters and supports around it, because people value it,” Voorwinde said.

Your Daily Phil: New survey on religious participation in the Reconstructionist movement + The third anniversary of the Tree of Life attack

Jay Sanderson on why the L.A. federation’s model had to change

THE NUMBERS ARE IN

To prevent a crisis of clergy burnout, help them cultivate their inner lives

How we talk about our day schools

Global vaccine equity: To save a life is to save a world