Beyond February: the new urgency of disabilities awareness and inclusion 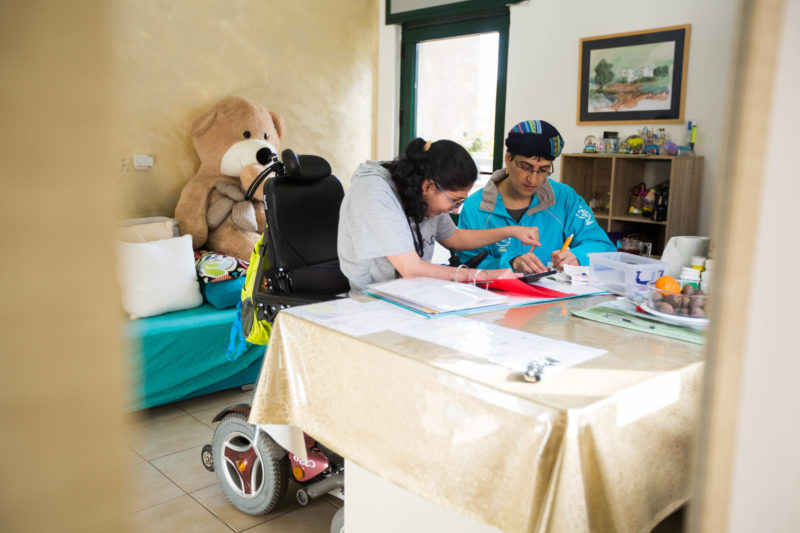 Before COVID-19, supported housing care coordinators ensure people with disabilities in Israel could live on their own and empower them to manage everyday activities like finances and home repairs. Today, these coordinators work remotely and models like this will drive advancements in wider disabilities inclusion. Credit: Tamir Elterman for JDC.

By Efrat Stern and Orly Fruchter

In February, Jewish communities across North America and Israel marked Jewish Disabilities Awareness and Inclusion Month. It was heartening that JDAIM gave voice to millions of Jews with disabilities and highlighted disabilities inclusion achievements, but it was not enough. Now that February has come and gone, we must continue to work urgently to ensure our communities are welcoming and empowering throughout the year.

Today there are around one billion people with disabilities worldwide. They’re part of our families and circles of loved ones, members of our day schools, summer camps, synagogues, community centers and social networks. Despite this social proximity, they often live on the margins and, live even more precariously during times of crises.

As we have seen in the last year, COVID-19 has disproportionately affected people with disabilities, upending the support, services, and efforts at accessibility and community integration that have been key to their progress. And, perhaps more pressing, the significant gains made on disabilities issues over the years are in danger of being lost. Why?

People with disabilities have once again been largely absent from public discourse on pandemic needs. Such an absence of their voices and concerns, and media’s reliance on old stereotypes about people with disabilities, made it that much harder for them to retain their hard-fought place in society.

And yet, people with disabilities have faced outsized pandemic-related challenges. They have higher rates of unemployment and are now encountering limited options for returning to work. They have experienced higher rates of loneliness and isolation as their social participation has been severely limited by restrictions on public transportation, a mainstay of their independence. The suspension of in-person gatherings is further exacerbated by the lower rates of digital literacy in this populations, cutting them off from vitally important online activities and medical information.

For many years, we have worked with people with disabilities to develop responses to these needs and to strengthen and promote their broader participation in society. There are three important objectives which can help Jewish leaders and institutions, grassroots organizations and community activists mitigate pandemic-era losses and advance self-empowerment. This is an opportunity to build back better.

The Ruderman Family Foundation’s “Link20” global social movement empowers a network of young activists with and without disabilities to be advocates for the rights of people with disabilities, strengthening their leadership skills to promote and achieve social justice and change. Their recent campaign in Israel promoted accessible public transportation. The key to their success was promoting that accessibility for those with disabilities also serves the greater community, including the elderly and parents with young children.

Second, embrace independent living. It’s a cost-effective, safe, and rewarding path to inclusive societies. People with disabilities having homes of their own and becoming part of the life of their community is an important step towards achieving full acceptance. As a society, we need to re-envision self-management skills, social connections, support networks, civic responsibility, and create person-centered-services that are financially sustainable and adaptable to remote operation.

Israel Unlimited, JDC’s strategic partnership with the Israeli government and the Ruderman Family Foundation initiated the Supported Housing program with support from the Azrieli Foundation, to empower people with disabilities to live in their own apartments, be involved in the community and receive support and guidance from a care-coordinator and mentor. The program assisted 400 people with disabilities in 37 cities across Israel to live in their own apartment and be part of the community. Research demonstrates that living in the community is 30% more cost-effective than the costs of an institution. Additionally, independence is a healthier option as people with disabilities living in institutions face greater risk of contracting COVID-19.

Jewish philanthropists and government bodies in Israel and North America can be leaders in this space and build on their successful history creating and supporting services for seniors. JDC has launched a comprehensive study in Israel aiming to build a strategic map and practical options for support. We hope this will become a model used by Jewish communities and the wider world.

The current crisis provides new opportunities to realize the dream of people with disabilities to be fully valued members of our communities. Achieving this is not just a matter of basic human justice, but an essential condition for socioeconomic advancement and a strong and resilient social fabric. When Jewish communities and Israel partner with people with disabilities to fulfill this promise, we give new meaning to an old and much-cherished Jewish concept of self-actualization: “If you will it, it is no dream.”

Efrat Stern is the director of the American Jewish Joint Distribution Committee’s Israel Unlimited and Orly Fruchter is the Manager of Neurodiverse Initiatives for the Azrieli Foundation Canada.

Your Daily Phil: MacKenzie Scott donates to Repair the World and HIAS + The Orthodox Union raised funds from 2,000 donors to help India

To help teens navigate antisemitism, we must teach compassionate disagreement