At JPro, reconnection after two years of COVID dominates the scene 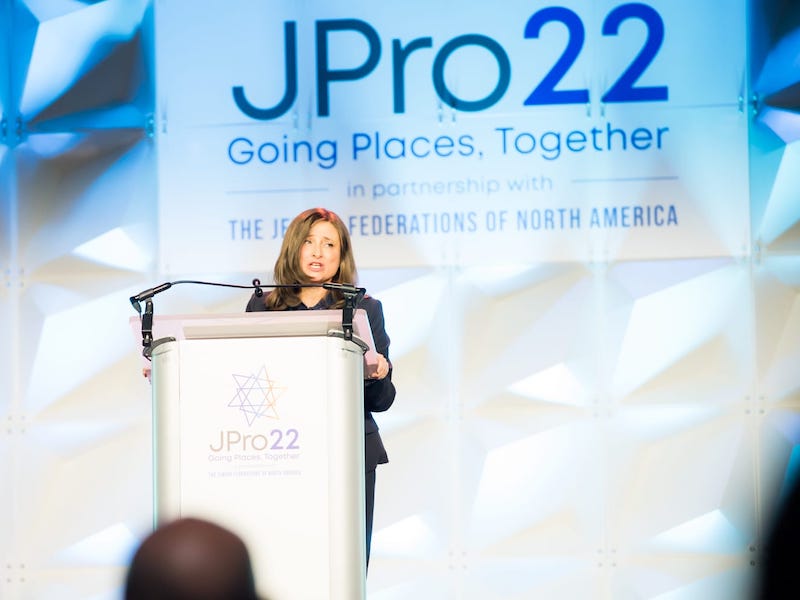 Another day, another conference. Today is the second day of JPro22, which has brought 1,200 Jewish nonprofit employees to Cleveland for three days of networking and professional development. It’s the second large-scale conference in five weeks, following the Jewish Funders Network gathering, to bring together Jewish professionals from across the country.

JPro22 is twice the size of the JFN conference, and had been sold out for two months leading up to this week. The excitement is showing, attendees told eJewishPhilanthropy. On Monday, as participants streamed into Cleveland’s Huntington Convention Center, they engaged in the rejuvenating, mostly unmasked small talk that’s characterized the first slate of in-person Jewish conventions since before the pandemic.

“For most of the people here, it’s their first conference since March 2020,” Stephanie Hausner, chief program officer at the Conference of Presidents of Major American Jewish Organizations, told eJP. “And so there are a lot of people wearing masks, a lot of people being cautious, but there’s still this excitement.”

The conference is organized in partnership with the Jewish Federations of North America (JFNA) and its theme is collaboration, but the process of emerging from the pandemic was very much the motif of the conference’s opening plenary on Monday night. A series of speakers at the start of the event reminisced about organizing for racial justice in 2020, and dealing with shutdowns by having a drive-in movie screening in a JCC parking lot. Two different rabbis, at two different points during the night, broke out into song in the middle of their remarks.

Keynote speaker Erica Brown, director of Yeshiva University’s Sacks-Herenstein Center for Values and Leadership, spoke about the importance of interpersonal connection and said the appropriate blessing for the crowd to recite would be “Blessed is the one who revives the dead” which, according to a rabbi in the Talmud, is recited upon not seeing someone for more than a year.

She also encouraged attendees to remain in their jobs, despite the fatigue of Jewish nonprofit work during COVID-19.

“You say… ‘I’m not a virologist, I just want to do the job I was trained for. Therefore, I am quitting, I am retiring, I am leaving the field,’” she said. “So I say to you, with every ounce of love I can muster, if you’re a leader — this is what you signed up for. Because true leadership is always about negotiating uncertainty for yourself and for others. It’s about traveling in the wilderness for a really long time before you reach the promised land.”

This year’s JPro represents a merger with two other conferences — FedPro, a gathering specifically for employees of Jewish federations, and JFNA’s Finance, Technology, People, and Innovation, or FTPI, conference. Its full name is “JPro22 in partnership with JFNA.” While the crowd is similar to JFN’s attendees (albeit younger, and largely sans the philanthropists themselves), the content is more niche than the JFN agenda, which covered Jewish topics of concern ranging from integration in Israel to the war in Ukraine.

FTPI had a slate of sessions on Sunday, for example, with topics ranging from purchasing insurance to accounting standards to a session called “AI and The Future of Fundraising.” JPro’s schedule began Monday with a series of visits to Cleveland civic institutions and community organizations, like the Cleveland Guardians’ Progressive Field or an urban agriculture project. After an opening plenary, attendees made their way to the obligatory visit to the Rock & Roll Hall of Fame.

Today and tomorrow, participants will attend a variety of Jewish text classes, professional development sessions and meetings based on home locations or identity groups such as attendees of color or LGBTQ attendees. The professional development sessions concern everything from email marketing to mergers and acquisitions to how to run an effective meeting. And as a gift, attendees received a pair of socks with a famous quote from the Talmudic sage Hillel: “That which is hateful to you, do not do to your fellow. That is the whole Torah. All the rest is commentary. Now go and learn it.”

For many attendees, however, the conference schedule wasn’t the main draw. Instead, they were there to have meetings — formal and informal — and to run into peers they’ve only seen by Zoom for more than two years. “I have plans to go to the sessions,” Hausner said. “But they were also intentional at the conference to have a lot of purposeful time for those hallway conversations, knowing people are going to want to reconnect.”