At Hanukkah rally against antisemitism in Times Square, politicians and entertainers convey concern and joy

The rally, part of the Shine A Light campaign, featured New York Gov. Kathy Hochul as well as a series of musical performances. 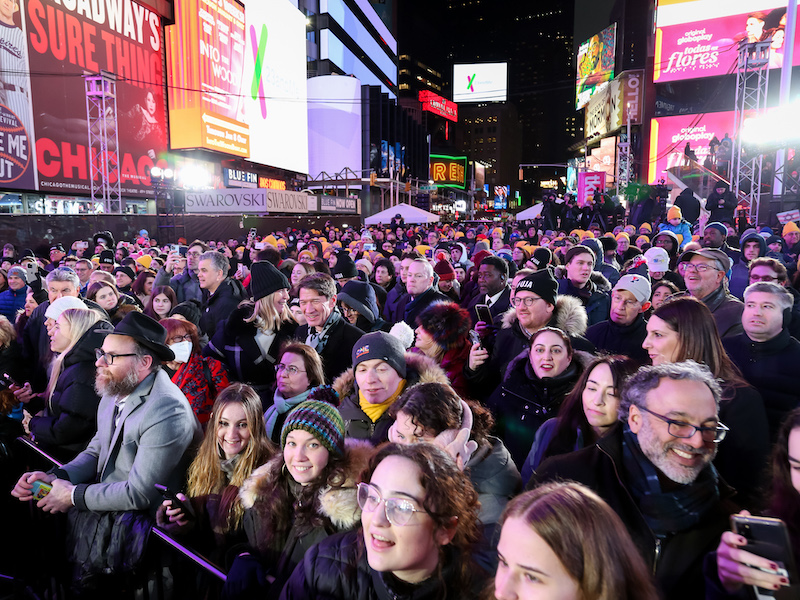 The crowd at the rally on Monday night.

“Enough of the blech. Let’s have fun.” That was how comedian Ariel Elias introduced a series of musical performances last night at a rally in Times Square, which drew hundreds of people to the center of Manhattan on a frigid evening to protest antisemitism, celebrate the second night of Hanukkah — and have a good time.

Elias — who rocketed to internet fame in October after drinking a beer that a heckler threw at her — had the delicate task that falls to many emcees of Jewish demonstrations: She had to call attention to the grave and worsening problem of antisemitism while keeping the crowd entertained and uplifted.

“You know things are rough out there when a bunch of New Yorkers are actually willing to come to Times Square,” she quipped. Less than two minutes later, she got serious: “It’s a hard reality to face, but we have to: Antisemitism is intensifying… It’s become normalized across our culture, on social media, in pop culture, in politics and on the streets. And so our efforts to fight it must be even stronger.”

The mix of concern and entertainment spanned the course of the event, part of the national Shine A Light campaign to oppose antisemitism. The rally’s attendees included a robust delegation from the Modern Orthodox Ramaz School, all wearing matching yellow beanies embroidered with the school’s logo. The Ramaz choir (likewise wearing the beanies) closed out the event. Some other rally-goers wore black beanies with the insignia of the UJA-Federation of New York, and some held UJA-branded signs reading, “Fight Jew hatred,” “We stand together” and “Stamp out antisemitism.”

In addition to the the cast of the Yiddish-language production of “Fiddler on the Roof” — which sang “God Bless America” and “To Life,” a tune from the show, both in Yiddish — the event included a performance by the Hasidic rapper Nissim Black, wearing a white overcoat; and speeches by Little Rock, Ark. Mayor Frank Scott Jr. as well as TikTok influencer Montana Tucker, who recently made a series of videos on the platform about the Holocaust.

Near the end of the event, Jewish college students who have experienced antisemitism lit an electric menorah, with blessings (sans God’s name) sung by David Herskowitz, perhpas best known as the third Miami Boys Choir soloist in a viral Jewish music hit. The students were accompanied by Félix V. Matos Rodríguez, the chancellor of the City University of New York, who dropped out of testifying at a City Council hearing on antisemitism earlier this year. Later in the year, he committed to CUNY spending nearly $1 million to combat antisemitism on campus.

The highest-profile guests were New York Gov. Kathy Hochul and state Attorney General Letitia James, who both pledged to fight antisemitism. Hochul highlighted her efforts to ensure schools were teaching about the Holocaust and to promote security for Jewish institutions. James, who wished the crowd a decently pronounced “chag sameach,” stressed the role of non-Jews in combating hate against Jews.

“Working together with non-Jews… is so critically important,” James said. “The only way that we are going to stamp out ignorance is with the light of education and understanding and respect.”