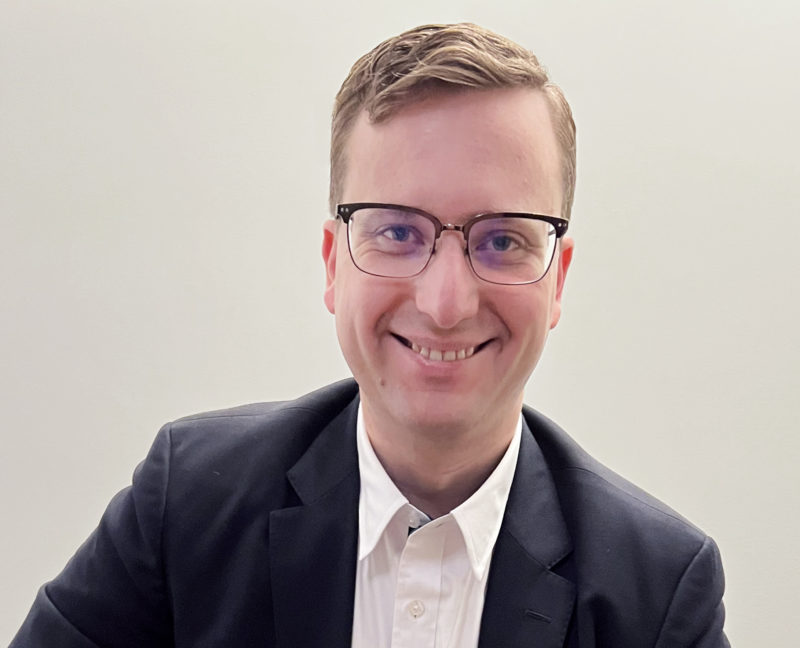 Derdiger succeeds Jim Fleischer, who died in October following a three-year battle with cancer, and takes the helm of the fraternity at a challenging time for Jewish students, who face increasing hostilities around Israel issues on their campuses, and amid an uptick in antisemitic incidents nationwide.

Through programming surrounding Jewish identity, relationship with Israel, philanthropy, civic engagement, professional development, athletics and health, social activities and more, AEPi’s goal, said Derdiger, is “to move the individual forward with their own interest and aptitude in all these areas, and we believe that when we do that, we create people who will be excellent leaders for the Jewish community.”

“From a chapter level and a national fraternity level, we try to identify students at inflection points where engagement with partners or additional resources is most effective,” Derdiger said. “We’re incredibly committed to the Jewish people and providing an immersive Jewish experience to our undergraduate members, and likewise to the community… We are a Jewish organization. And we exist within the context of Greek life to provide a home away from home for Jewish men.”

Derdiger characterizes today’s college campus today as being at “a collision point. AEPi, said Derdiger, “seeks to provide the venue for all of those difficult and needy conversations to take place,” as well as educational resources to guide difficult conversations.

According to an April 2021 Louis D. Brandeis Center for Human Rights study conducted in conjunction with Jewish sorority Alpha Epsilon Phi, Derdiger added, nearly 70% of students surveyed personally experienced or were familiar with an antisemitic attack in the past 120 days before being surveyed. More than 65% have felt unsafe on campus due to physical or verbal attacks; one in 10 reported they have feared they themselves would be physically attacked; and roughly 50% have felt the need to hide their Jewish identity.

Speaking two days after four hostages escaped from Congregation Beth Israel in Colleyville, Texas, Derdiger asserted that the Indianapolis-based fraternity works closely with the Secure Community Network, which had provided security training to the Texas synagogue, to provide similar trainings for local chapters. Because AEPi doesn’t own or manage houses on the majority of campuses where there are chapters, locations can vary and have different security needs than most synagogue buildings. Still, Derdiger added, “The practice of safety and being mindful about safety on a personal level and on a community level is also something that we stress quite a bit and provide training for.”

Founded in 1913, AEPi has more than 100,000 living alumni who serve as a social, business and Jewish communal network for AEPi brothers; there are 6,000 current undergraduate AEPi members on 160 different campuses.

In a world where Diversity, Equity and Inclusion are on the agenda for most organizations, Derdiger said that “inclusion is something that we encourage, through programming every single day.” The fraternity is not specifically Reform, Orthodox or Conservative.  He also noted that people can join AEPi as long as they identify as male.

Derdiger called philanthropy a “key element and a core element of our Judaism and our Jewish identity,” adding that AEPi’s goal is “to help inspire and create philanthropic individuals. We want our members to come out of college knowing more about philanthropy, and specifically about Jewish philanthropy, knowing how to identify what causes are important to them and how to engage in philanthropic work.” Each chapter participates in its own philanthropic efforts, with support, resources and training from the national fraternity. “Ultimately, the chapters and the members are the ones that are in the learning laboratories on campus, and they are doing it themselves often for the first time often,” he added. “The more you give, the more you get back, as I think with all things in the Jewish community.”

Derdiger said that Fleischer, his predecessor, “was a guy who everybody wanted to work for, and everybody loved coming to work every single day. He had a way of aligning people. I hope to bring that kind of alignment to AEPi and that kind of culture, where we all just love working together, love doing what we do. And we are all aligned in vision. That is something that Jim was so incredibly good at.”

One of Derdiger’s goals – which he developed with Fleischer – was for AEPi to be more data-driven, he told eJP, noting that data collection and member education are among the priorities moving forward.

“I want AEPi to be not only the best fraternity, not only the best Jewish student organization, but among the top Jewish organizations in the world, to make sure that the things that we say we do, the things that I know impacted me and continue to impact me, are impacting every single one of our members and impacting them throughout the course of their life… Today there are more Jewish men on campus than ever before in history. And the opportunity for AEPi is incredibly large to make sure that those students are part of the Jewish community and part of the Jewish conversation.”