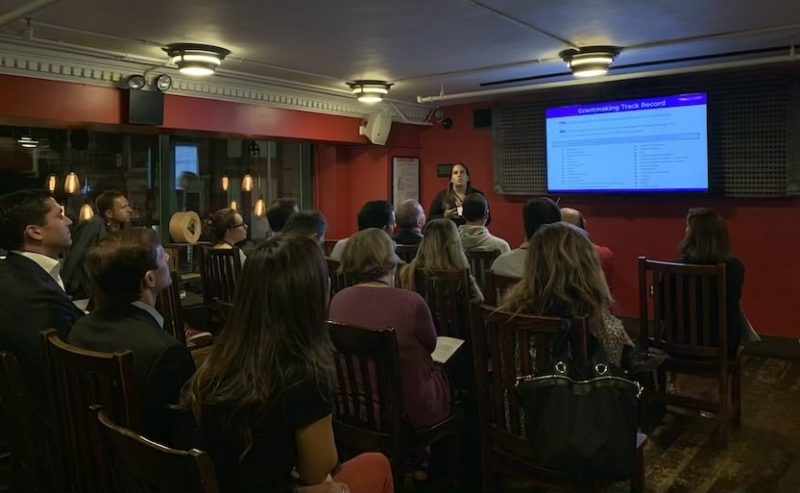 The Natan Fund is one of the rare grantmakers that offers open calls for applicants, and offers feedback on every one. Now the fund’s new executive director, Adina Poupko, intends to take that ethos one step further, by helping connect both rejected applicants and grantees with other foundations who might be interested in their work, she told eJewishPhilanthropy in her first interview since taking the position in February.

“We offer exposure to larger philanthropic entities,” she said. “We want to be a little more proactive about that.” The fund is in “early-stage” conversations with larger foundations interested in Natan’s open-call process, Poupko said.

Poupko, previously Natan’s associate director, replaced Felicia Herman, its first executive director. Herman will remain involved in Natan, and is also the director of the Aligned Grant Program of the Jewish Community Response and Impact Fund, founded as an emergency fund in April 2020 to support the Jewish community early in the coronavirus pandemic.

Real estate investor Tony Felzen was named the fund’s new board chair, replacing David Steinhardt, a Natan co-founder who has led the board for nearly 20 years, since a group of young professionals established the giving circle in 2002.

The group’s aim was to create a community around the support of new ideas that it felt had the potential to achieve broad change.

The fund has 70 members, who make a suggested minimum contribution of $18,000. Most of the members serve on at least one of three committees that focus on the grant areas of confronting antisemitism, Jewish connections and Jerusalem. While Natan funds some longtime grantees that are beyond the startup stage, it focuses on organizations with annual budgets of less than $1.5 million, and has disbursed more than $15 million to over 270 organizations.

Poupko declined to disclose Natan’s operating budget. Because Natan is fiscally sponsored by FJC: A Foundation of Philanthropic Funds, and is not itself an independent 501(c)(3), it does not need to file the form 990 to the Internal Revenue Service that is required of all nonprofits.

Natan also occasionally offers additional grants at the discretion of the board. The committees only offer grants after reaching a consensus on both whom to fund, and at what level. The average grant size is about $25,000, Poupko said.

“We do this with laughter and a bit of wine,” said Poupko, who is the daughter of an Orthodox rabbi and a descendant of the Poupko Hasidic dynasty; her sister, Hindy Poupko, is deputy chief planning officer at UJA-Federation of New York. She grew up in Montreal and then Cincinnati, and attended Stern College, studying political science and Jewish philosophy. She always knew she would work in the Jewish world.

“I’ve always felt very privileged and lucky in my own Jewish experience, so I was thrilled when I was given the opportunity to work at Natan and now lead Natan,” Poupko said.

“We are small but mighty,” Poupko said, noting that 79% of the startups Natan has funded still exist today. Natan was an early supporter of Hazon, one of the first Jewish environmental organizations; Sefaria, the free online library of Jewish texts; and Keshet, which supports and advocates for LGBTQ Jews.

The fund’s new grantees include JLens, an impact investor network that advocates for Israel; The Lehrhaus, a storefront learning center that will offer coffee and drinks; and Eshkolot, which provides Haredi young people in Israel with educational opportunities.

“Natan is known for early and smart investments, so we hope that being a Natan grantee will be a stamp of approval from other funders,” said Rabbi Rachel Isaacs, executive director of the Center for Small Town Jewish Life, also a new Natan grantee, which is cultivating a Jewish community in Waterville, Maine.

In addition to its grantees, Poupko and Felzen see Natan as benefitting its members, and said they aim to make the experience of membership more accessible, as well.

“I was in the Jewish philanthropic wilderness until I joined Natan,” said Felzen, adding that he didn’t know how to approach the group, and was also intimidated by some of the “big names” associated with it.

The need for consensus means Natan can’t grow beyond a certain size, Felzen said, but the group is offering “pop-up” giving circles on Zoom to those who are interested in replicating its model.

“I refer to Natan as my primary Jewish community,” he said.