Rabbi A. James Rudin began working for the AJC in 1968, just three years after the Second Vatican Council concluded. 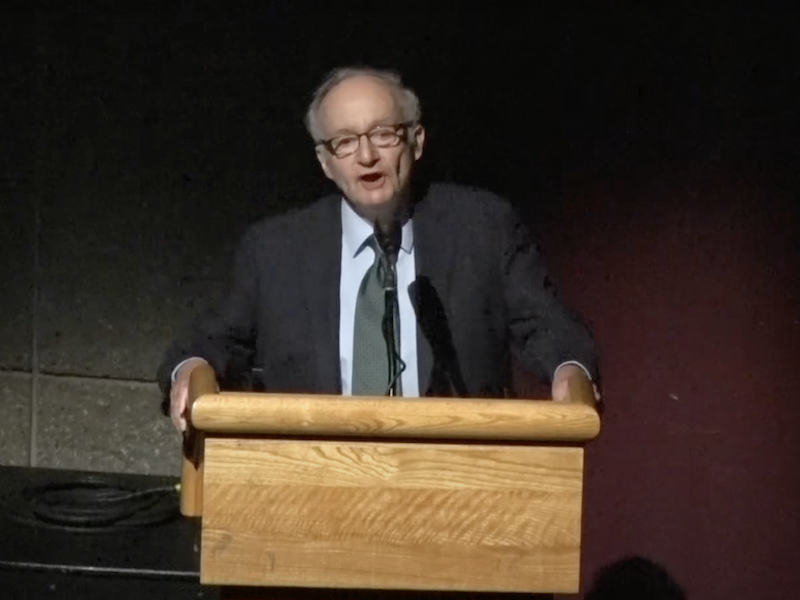 Rabbi A. James Rudin speaking at the Archdiocese of Atlanta in 2015.

In 1988, Jews in Austria and beyond protested when Pope John Paul II visited the country and met with its president, Kurt Waldheim, a former Nazi solider who had taken part in the deportation of Jews to Auschwitz.

For Rabbi A. James Rudin, then the American Jewish Committee’s director of interreligious affairs, the trip posed a challenge — a setback in what was then a two-decade-long career dedicated to advancing Jewish-Catholic relations.

But despite the painful spectacle — compounded by the pope declining to reference Jews when visiting the Mauthausen concentration camp — Rudin saw a silver lining: He and his allies in the Catholic Church convinced the pope not to visit Mauthausen together with Waldheim — which would have been, he felt, an especially egregious act. And he felt reassured when he was joined in his lobbying of John Paul II by a close friend: John Cardinal O’Connor, the archbishop of New York.

“Cardinal O’Connor and I worked very hard to explain to the people at the Vatican… that if he wanted to go, the pope should go alone without the president of Austria accompanying him” to Mauthausen, Rudin, 88, told eJP this month. “So that was part of our work.”

To Rudin, the Austria incident, and what followed, exemplified his mission over a half-century of interfaith work: to shape a new era in Jewish-Catholic relations — pushing through crises and celebrating breakthroughs in a sometimes difficult quest to create greater understanding. On Sunday, in recognition of his work, Rudin is being honored with the Papal Knighthood of the Order of St. Gregory the Great — only the third rabbi in history to receive the designation. He’ll be knighted at Saint Leo University in Florida, where he co-founded the Center for Catholic-Jewish Studies.

“We are all blessed by Rabbi Rudin’s achievements in promoting dialogue and collaboration among communities of different faiths,” Cardinal Sean Patrick O’Malley of Boston, who will bestow the honor on Rudin, said in a statement. “The impact of this work continues to grow as successive generations build on the foundation Rabbi Rudin has established.”

Rudin began working for the AJC in 1968, just three years after the Second Vatican Council concluded, transforming Catholic belief, liturgy and practice. Most significantly for Jews, Vatican II included Nostra Aetate, a declaration by the Church affirming that Jews were not responsible for the death of Jesus — overturning centuries of Catholic teaching — and adopting an attitude of “mutual understanding and respect” toward Jews and people of other religions. Some Jewish groups and their Catholic peers welcomed the declaration as an open door toward dialogue and bridge-building.

“There was an excitement, as there would be with any revolution,” Rudin told eJP. “There was a feeling that, at long last, antisemitism and anti-Judaism were being confronted by the Roman Catholic Church… We were very optimistic but we also knew that trying to change the course of history between Jews and Catholics would be very difficult because of these 1,900 years of mutual suspicion.”

Rudin grew up internalizing the value of coexistence. As a child in Alexandria, Va., he said, he felt that both Jews and Catholics were minorities in a largely Protestant town, “so we were, in a way, all bound together.” Later, after receiving rabbinic ordination at Hebrew Union College, the Reform seminary, he served as a U.S. Air Force chaplain in Japan and Korea — a position that compelled clergy of different religions to share space and resources.

“In the military, at least overseas, we all had to pull together,” he said. “You couldn’t just be off on your own.”

Rudin retired from his position at the AJC in 2000. Where interfaith work particularly remains to be done, he said, is in dispelling stereotypes from rank-and-file Jews and Catholics, especially in light of rising antisemitism. Although the United States is becoming more secular, Rudin said, nonreligious people who grew up in a Catholic milieu may still be susceptible to traditional Catholic anti-Jewish prejudice. The same may be true, he said, for secular Jews.

“In the atmosphere and the teaching, and in the 2,000 years of tradition, there has been built-in animosity toward Jews and Judaism,” he said. “Even if a person doesn’t go to church… that doesn’t mean they don’t have in their heads certain feelings they’ve inherited… It doesn’t really matter whether [someone] goes to church or goes to synagogue. They’ve inherited in the culture, unfortunately, certain opinions, tropes, and that’s what we have to deal with.”

Rudin’s knighthood comes at a time of resurgent conservative Catholicism in the United States. The U.S. Catholic bishops’ conference just elected a conservative, Oklahoma City Archbishop Paul Coakley, as one of its top officials. And celebration of the Latin Mass has spiked in the United States — a choice Pope Francis said may indicate opposition to Vatican II more broadly. But Rudin said such debates are for Catholics to resolve internally.

“This struggle that’s going on inside the Catholic Church, of course that’s for Catholics to settle,” he said. “I hope it does not slow down or impede… the relationships we’ve built. It’s like building a bridge… It can get knocked down. Bridges have to be sturdy enough.”