Described as an ‘Abraham’s tent,’ the luxurious project has spared no expense, providing a state-of-the-art luxury cultural center and learning experience in the heart of modern Jerusalem. 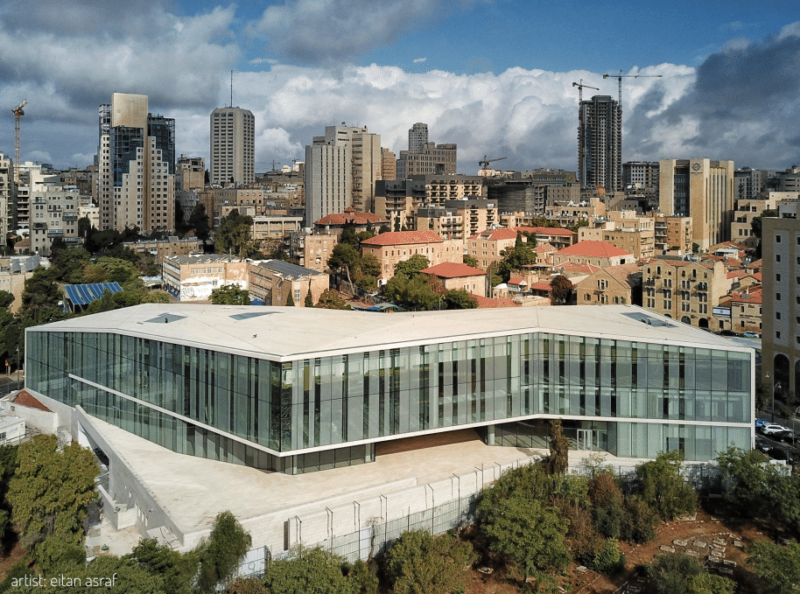 Over the last 3,500 years or so, few construction projects in the holy city of Jerusalem have piqued as much curiosity or controversy as the Museum of Tolerance.

For the last 21 years, Jerusalemites have watched with anticipation as industrial machinery burrowed and hammered into sacred ground and a sparkling new structure has risen slowly – very slowly – to dominate the heart of the modern city center.

Hindered by precious archeological discoveries, bitter legal battles, protests and now a global pandemic, many have also wondered what this mysterious building will eventually contain and what it might add to a city already packed with museums.

Set for completion in the summer of 2023, the Museum of Tolerance Jerusalem (MOTJ), a project of the Los Angeles-based Simon Wiesenthal Center, has already hosted a handful of high-profile events, but few people have been granted an in-depth look beyond its luxurious facade or heard in detail about the creators’ vision for a vibrant cultural center aimed at fostering dialogue and opening people’s minds.

Such a concept might seem like an anomaly in one of the world’s most conflicted and divided cities, but it is exactly Jerusalem’s fractious population who those involved with the museum’s creation are hoping will visit and utilize what they say is an investment for future generations.

“It’s based on Abraham’s tent, open on all sides and welcoming to all populations – religious, secular, Jewish, Muslim, Christian,” Jonathan Riss, director of operations, explained as he gave Jewish Insider an inaugural peek inside what might be one of the most spectacular buildings constructed in Jerusalem this century.

Standing on the corner of Hillel Street, opposite Kikar Hatulim — a landmark but long-neglected Jerusalem square, Riss, managing director of financial investment firm Coleridge Capital and a representative of the museum’s owners, begins by describing how the expansive 1,000-seat open-air amphitheater, which leads down to the lower-level glass entrance, was built to mimic the breathtaking Roman colosseum in Caesarea.

The pathways flowing around the stone theater are wide and welcoming. On one side sits a ticket booth, next to what Riss hopes will be an upscale dairy restaurant that he says celebrity chefs are already vying to manage. An avenue on the other side leads to the upper-level entrance. Eventually trees and flowers will line this walkway, which features plaques paying tribute to various scholars and Nobel Prize winners. It will be named the “Tikkun Olam Garden.”

“For people who changed the world through tolerance and peace,” stated Riss, who lives in Denver and has been shuttling regularly to Jerusalem since the building’s inception in the late 1990s.

If the outside plaza is a celebration of individuals who changed the world, then the architectural design of the 185,000-square-foot campus represents a massive change for Jerusalem. Not only to the city’s landscape — MOTJ straddles the seamline between West Jerusalem’s city center and the Old City — but also by being a carefully crafted, no-expenses-spared, state-of-the-art, ecologically friendly development.

Shaped like a diamond, one side of the building’s exterior is composed of smooth, sharp limestone imported from Portugal and coated to comply with Israel’s strict building codes. The stones, Riss said, change shade according to the angle of the sun and are treated to repel graffiti. The side facing the Old City boasts the longest glass façade in the Middle East, according to Riss, with energy-saving technology fitted inside the windows.

On top, he said, the rooftop is equally clean, free from Israel’s signature solar panels, water heaters and air conditioning units. All the infrastructure and technology is neatly tucked away in the basement.

The outdoor amphitheater, which seats 1,000, is flanked by a Second Temple aqueduct at its base. Discovered as the foundations were laid two decades ago, it is now lit with blue lighting and protected by glass. Up above is a low stage where a screen and speakers appear to magically rise up at the flip of a switch.

The soon-to-be dairy restaurant is kitted out with the finest kitchen equipment brought in from China and a special pizza oven from Italy. Its seating area will have interactive tables and will remain open in the evenings, long after the museum closes its doors. Outdoor concerts and performances are already being scheduled with the goal of drawing in crowds to what is hoped will become a brand-new entertainment venue in Jerusalem.

Inside, the center spans four floors with a central staircase flowing through the middle and a skylight that lets off colored beams at night. The top two levels will serve as a convention and entertainment center, with a large function hall. There is also a 400-seat movie theater with Italian-made velvet chairs, a rolling screen and an LED screen that will allow for movie premieres and a translator’s booth.

On the same floor, a smaller conference room doubles as a synagogue and will soon contain a specially commissioned ark fashioned in the shape of a dove. At the end of the hall on the upper floor is another kitchen, this one for meat and able to cater for some 3,000 people.

The actual museum space is on the two lower floors — connected by an 80-person elevator, the likes of which, says Riss, does not exist elsewhere in Israel. A children’s museum telling the biblical story of Moses is set to occupy one of the floors, with another 150-seat theater, children’s classrooms, and plush dressing rooms for celebrities to prepare for performances. The floor also contains a small police station that will bolster security.

The heart of the Tolerance Museum, however, will be on the lowest level. Its content — based on the vision of Rabbi Marvin Hier, founder and dean of the Simon Wiesenthal Center and the Museum of Tolerance in L.A. — will differ from its well-established counterpart in California. The exhibits, which have been held up due to the COVID-19 pandemic, will avoid Holocaust subjects, so as not to clash with the nearby Yad Vashem World Holocaust Remembrance Center, and focus instead on telling Israel’s unique story as a Jewish and democratic state.

Like in L.A., there will be a social lab where visitors can explore relationships between different religious and cultural groups, as well as tackle some of the thornier issues causing friction in society at large and Israel in particular.

If Hier is the content’s visionary, Larry Mizel, co-founder and chairman of MOTJ, chairman of the Simon Wiesenthal Center and of the Museum of Tolerance in Los Angeles, is the driving force that has kept the project going through numerous hurdles. One of the main benefactosr of the $260 million project, Riss called him a “street fighter.”

“He is the type of guy that never says never, and he sees this building as a game changer for Israeli society,” said Riss. “He has the tenacity to go through battles and because of that we will finish it and you will see the results.”

But Riss, who oversaw the project together with Susan Burden, the Wiesenthal Center’s Chief Financial Officer and Chief Administrative Officer, wasn’t always so confident. For more than 20 years, the pair spent weeks each month fighting Israeli bureaucracy, embroiled in lengthy court battles and carefully adhering to strict building rules.

The story of MOTJ began in 1993 when then-Jerusalem Mayor Teddy Kollek visited Los Angeles, recalled Riss. He fell in love with the Museum of Tolerance and invited Hier to build something similar in Jerusalem. After Kollek was replaced by Ehud Olmert, the city allocated the Wiesenthal Center the current plot, which was previously a gravel parking lot beside a Muslim cemetery.

L.A.-based starchitect Frank Gehry was hired, and he designed a mammoth structure made of glass and steel. The plans faced stiff criticism for not blending with the surrounding area, but were reluctantly approved in 2002. Two years later, California’s then-Gov. Arnold Schwarzenegger was invited to Israel to break ground on the new project.

Then, as with all new construction projects in Israel, the Antiquities Authority was brought in to explore the site, discovering hundreds of human remains likely belonging to the adjacent cemetery. Islamic groups and individual Palestinians filed a legal petition in the High Court saying that the site was part of the ancient cemetery with graves dating back hundreds of years. Construction was halted, starting up again five years later after the court ruled that no previous objections had been made when the area was a municipal parking lot.

Trouble started again two years later when Gehry quit the project and Israeli architects, Bracha and Michael Chyutin, were brought in with a modified plan. They too are no longer with the project, though it is their design that is being implemented today.

Riss, who can finally see a bustling museum, cultural and convention center drawing people from Jerusalem’s diverse population, is clearly proud of the nascent project and said that the lengthy wait will be well worth it for everyone.

“At the end of the day, if we didn’t believe that this project could change Israeli society or improve Jerusalem, that it can promote tolerance and openness in an amazing building for different people from different walks of life and bridge those differences,” he said, wrapping up the tour. “Then we wouldn’t have done it.”