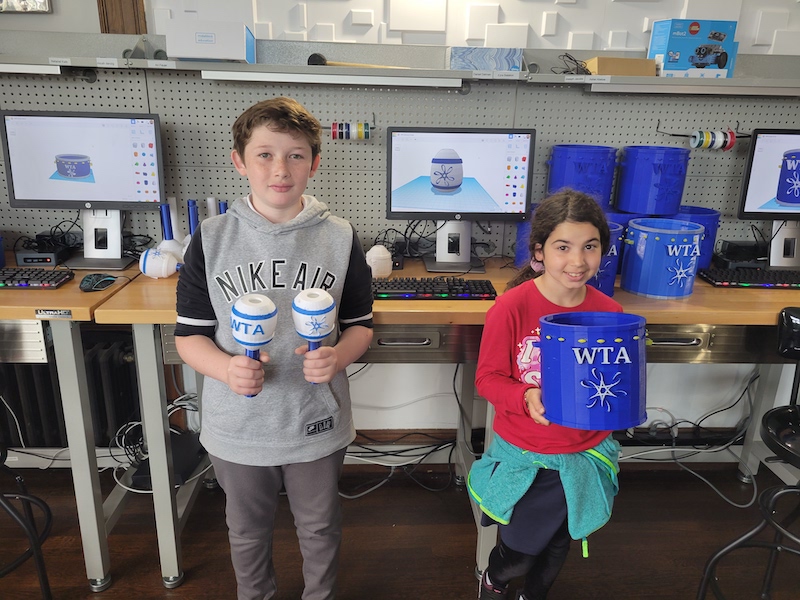 Students hold the 3D-printed instruments they designed at Westchester Torah Academy for the Celebrate Israel Parade.

Kovi Ressler, an eighth grader at Westchester Torah Academy, has been to New York City’s Celebrate Israel parade before. But he’s especially excited to go Sunday and to bring a drum and maraca that his class designed and 3D-printed — colored blue and white, naturally.

“Usually before we just walked around, but now we 3D-printed our own things to use” during the march up Fifth Avenue, Ressler, 14, told eJewishPhilanthropy. “I think it’s going to be fun. It’s the first time we did that.”

The drum and maraca are some of the 60 instruments to come out of a program at Westchester Torah Academy (WTA) in New Rochelle, N.Y., in which students learn tech skills and graphic and computer-assisted design while building products ranging from toys to Jewish ritual objects.

The project is the result of the first year of WTA’s “Practical STEAM” program, which aims to give students grounding in Science, Technology, Engineering, Arts and Math while teaching them the programming and computer science skills that will be essential for the jobs of the present and future.

“In traditional STEAM programs, they really focus a lot on coding and robotics,” David Merel, WTA’s director of operations and technology, told eJP. “A lot of the programs that they do tend to be things like making ‘Iron Man’ gloves that I wouldn’t say really have a lot of practical application, but they are fun to make.”

Making STEM – Science, Technology, Engineering, and Math study – a priority at early ages has been championed for some time across the educational system, with some schools adding in arts education as well. Merel tries to take a more practical route than other schools — which he hopes is equally fun — teaching students everything from how to build their own PCs to plumbing and deploying a Wi-Fi network. Earlier this year, the students designed and printed their own mezuzot.

“It’s almost like a 21st-century shop [class]. That’s what makes it so different,” he said. “The kids who are coming out of this program are really getting a much better handle on STEAM industries.”

Rather than integrate those skills into the students’ existing curriculum, the school made Practical STEAM its own class, which allows students to devote more attention to it.

Merel envisioned WTA’s class as a place where students could experiment with technology. He set up dedicated workstations including workbenches, computers capable of coding work and 3D printers for each student. Each of the 24 workstations cost $1,000, donated personally by Merel. He calls it an affordable investment that’s of a piece with WTA’s relatively low tuition, which runs at $14,350 for eighth grade in a metropolitan area where the sticker price for some competitors can top $50,000.

Keeping costs down at the school, he added, starts with hiring a lean staff whose members sometimes take on multiple responsibilities — something exemplified by his personal story. An entrepreneur with experience in the telecom industry, Merel was originally brought into WTA to deploy the school’s Wi-Fi network — and brought the cost down from proposals as high as $30,000 to $2,000. Later, he was tapped to lead the STEAM program, and his job combines administrative responsibilities with teaching.

“I’m not like a math teacher who has to figure out STEAM, or an English teacher. I am from this industry,” Merel said. “That helps in reducing costs, because I don’t have to develop anything I know how to already deploy.”

He added, “You can save money by hiring experienced individuals. Maybe you pay more for one guy, but you end up getting more in terms of reduction of your infrastructure costs.”

To cap off the school year, the students are expected to design a project where they will use the skills they learned in their STEAM curriculum to give back to their community. While the ideas are still being finalized, Merel expects the teens to help out local synagogues or community organizations, perhaps wiring their Wi-Fi networks or setting up smart home features.

Ressler hopes to use his new skills in high school and beyond.

“It’s probably one of my favorite classes now,” Ressler told eJP. “When I go to high school, I’ve actually chosen the engineering track, and when I get older, I’m actually hoping to be a software engineer. All this other stuff [I’m] learning is really helpful for that.”