With new building and fellowship, the National Library of Israel hopes to become truly public

The library’s leadership hopes a fellowship for scholars and artists, plus a partnership with a prestigious literary award, will make it a cultural center. 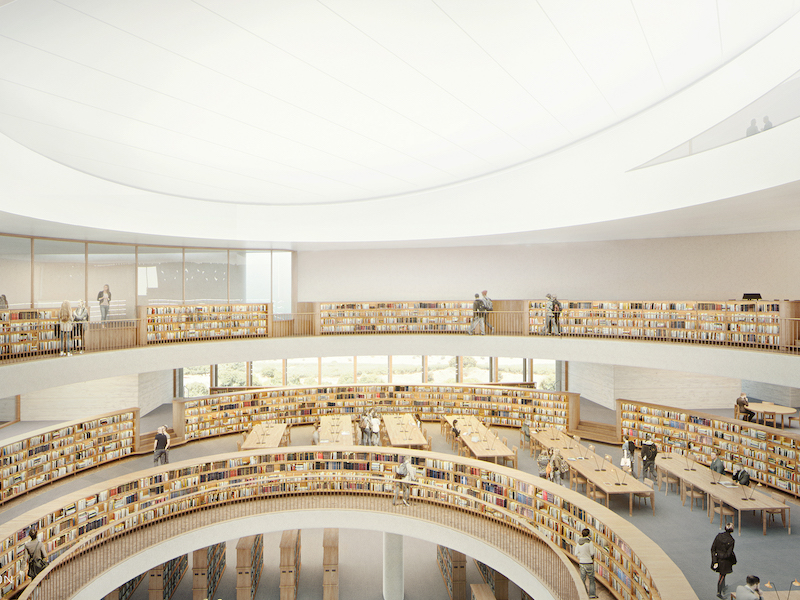 An illustration of the reading room in the new building of the National Library of Israel.

A small community of academics who treasure the library’s collections — including the op-ed’s author, professor Yitzhak Hen — lamented the news, but it didn’t attract much wider attention. Nor did the announcement of the library’s reopening just weeks later.

Situated not far from the iconic Jerusalem buildings of the Knesset, the Israel Museum and the Shrine of the Book, the library and its collection of five million items gets comparatively little notice. But now, the library hopes a trio of developments — funded in part by a large donation — will transform it from a hive for scholars into a draw for the public.

Later this year, the library will move to a gently sloping, 485,000-square-foot new building across from the Knesset, whose circular design surrounds an airy, open atrium. The four-acre campus will include an auditorium, a restaurant and exhibition spaces that can showcase its 100,000 rare items, photo archives and other holdings. In 2023, the library will inaugurate a $10,000 annual fellowship for academics and artists, with the goal of bringing international researchers to the library campus. And this week, the library announced a partnership with the Sami Rohr Prize, the most prestigious Jewish literary award, that will give its laureates special access to the library’s materials.

Both the fellowship and part of the new building are being financed by a donation from billionaire health food entrepreneurs Stewart and Lynda Resnick. The library would not reveal the size of the gift but told eJewishPhilanthropy that it was “eight figures.” Other donors had previously given larger gifts for the building, which has been in planning for years.

“It was a cozy academic club for academics all over Israel, and also European and American academics who would make use of its collections,” Raquel Ukeles, the library’s head of collections, told eJP. Now, she said, “It will become, hopefully, this very vibrant cultural center.”

The 2020 operational freeze and furlough — which lasted two weeks and was due in part to government budget cuts — was the first time in the library’s 130-year history that it suspended its services. More than a year later, Ukeles said, the institution is on firmer financial footing, following the passage of a government budget last year. The library’s 2022 operating budget is approximately $50.2 million, as opposed to $34.6 million in 2019.

Despite the pandemic budgetary woes, the library had already been pivoting to serving the broader public with events such as concerts, and drew 300,000 visitors to virtual events since March 2020. The changes underway aim to exhibit the library’s items — which are organized into four core collections of Judaica, Israel, Islam and humanities, and include a broad range of materials, such as the personal religious writings of Isaac Newton — to a greater number of tourists as well as researchers. The library is hoping for 500,000 in-person visitors a year once the new building opens, up from 180,000 in 2019.

“I think there’s always going to be a certain kind of person who spends hours and hours and hours looking at microfilm or some obscure source, and that’s great, and the library will still be there for them,” said Shayna Weiss, associate director of the Schusterman Center for Israel Studies at Brandeis University, who has used the library’s resources in her own academic research, including its historical collection of pashkevilim, or Haredi public posters.

Weiss added, “At the same time, there will be an inherently larger amount of people who want to  go to a concert or hear a lecture… The library is big enough to mean different things to different people.”

The library, which will have six stories above ground and four below, hopes to lure a larger number of scholars as well. The Resnick Fellowship, which will begin in the 2023-24 academic year, will last five months and be given to two, and later, four academics or artists — at least one of whom will be an American. The fellows will receive lodging in Jerusalem for part of that time, a mentor in their field, a budget to digitize materials and a personal reference librarian to help them in their work.

The same impulse drove the Sami Rohr partnership. The $100,000 prize goes to one work of fiction and nonfiction in alternate years, and has now become open to works translated into English for the first time. Prize winners will also receive priority in access to the library’s materials and reference librarians. Ukeles also hopes that the Rohr Prize winners will explore collaboration with the Resnick fellows.

The library’s goal, she said, is “to be the library for the Jewish people and to create these international networks of writers, artists and scholars. We will now have the facilities to be able to act on all the dreams we have for creating this dynamic center for artists, writers and other cultural producers.”