A proud Jew by choice, Rhein will come to ‘Repair’ from World Food Program USA 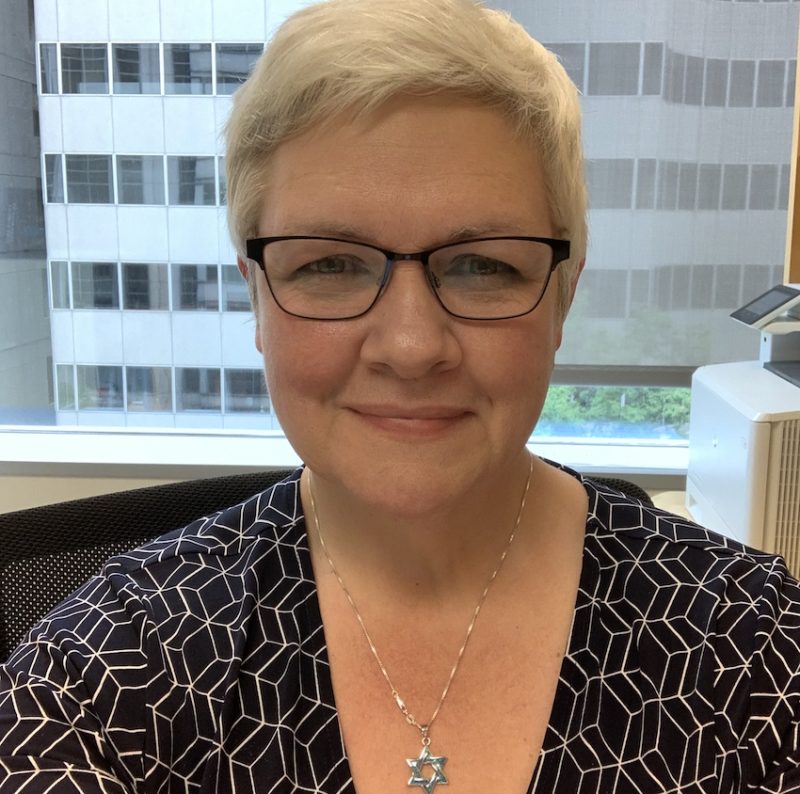 Repair the World, the Jewish service organization for millennials, was already planning to scale up its work when it received a $7 million grant from MacKenzie Scott in June, Wendy Rhein, the organization’s new senior director of philanthropy, told eJewishPhilanthropy.

Rhein comes to Repair the World from World Food Program USA, the United States division of the United Nations’s food assistance arm, where she served as chief of staff. She’s also worked as a regional managing director for UNICEF USA, and a chief strategy and engagement officer for Points of Light, a global network of volunteer organizations of which Repair the World is a member; Rhein first encountered the organization while at Points of Light.

She became a Repair the World volunteer herself, and also helped advise its president and CEO, Cindy Greenberg, on building the group’s fundraising capacity.

“We are incredibly fortunate to have Wendy join our team at such an exciting moment for the Jewish service movement,” said Greenberg. “We can’t wait for her to share her vision and hear directly from our stakeholders.” Repair the World had one senior development director prior to Rhein.

Repair the World connects Jews to volunteer opportunities in the hope of both making needed change in local communities, and inspiring the volunteers with a love of service and Jewish values, Greenberg has said. Its flagship program supports young adults in social change in 13 cities, including Atlanta, Chicago and Miami, under the guidance of a local director. The organization plans to use the Scott grant to expand to 20 cities, and will add the roles of chief operating officer and senior racial justice advisor this year.

For Rhein, taking her first job within the Jewish community is a milestone on a journey she started in her early 20s, when she first contemplated converting to Judaism. Growing up in the Detroit area in the 1970s in a liberal Presbyterian church, she became intrigued by Judaism after attending a Passover Seder at the age of 13.

“The conversations across all generations about enslavement, and our obligations as human beings — I was blown away,” she said.

When she was in her early 20s, her sister converted, and Rhein sometimes accompanied her to conversion classes. She gained some familiarity with Hebrew, and over the next decade learned more through conversations with various rabbis. It wasn’t until she was in her early 30s and became a mother to the first of two sons that she felt inspired to pursue a more formal Jewish education.

“I realized I was responsible for the spiritual development of another person,” she said. She and her sons, now 16 and 11, formally converted in 2014 at Temple Emanuel in Kensington, Md.

“Besides becoming a mother, it was the best decision I ever made. It just took me 25 years,” she said.

Her mother converted a year later.

“Wendy is an integral part of the fabric of our community,” said Adam Rosenwasser, Temple Emanuel’s senior rabbi. “She always makes me think in a way that expands my understanding of what it means to be welcoming.”

Rhein has chaired Temple Emanuel’s youth committee and also helped the synagogue create a Diversity, Equity and Inclusion (DEI) committee. She was part of the effort to change the bylaws to enable people who are not Jewish to serve in any synagogue position, Rosenwasser said. Rhein’s older son was also confirmed at Temple Emanuel, and was the social action vice president for his youth group.

Rhein decided on a career in nonprofits because she grew up feeling that she wanted to give back, she said. Her parents made it clear that she and her siblings were privileged to have food on the table, and to attend good schools.

“The [Presbyterian] congregation really grounded my social justice values,” she said. “It’s where I learned about Moses, the Golden Rule and recycling.”

She earned her bachelor’s degree from the University of Michigan and also holds a master’s degree in international affairs from Columbia University’s School of International and Public Affairs.

The consulting work she did for Repair the World focused on working with the directors in the cities where the organization operates to build local advisory councils and create a culture of philanthropy that would facilitate support for Repair the World’s grassroots efforts, Rhein said.

“It does help, with different foundations, to know that another foundation has supported the work. If you get a gift from the Gates Foundation, for example, it’s a heksher,” she said, using the Hebrew word for kosher certification.