‘Verses,’ a new podcast, connects the Bible and Broadway

In the podcast, two Jewish educators draw links between showtunes and the Torah. 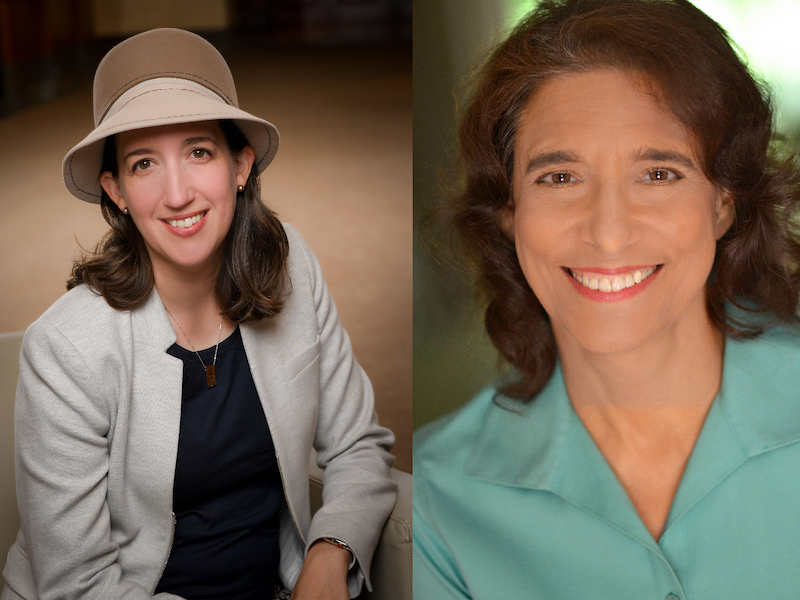 In a recent episode of their podcast “Verses,” a pair of Jewish educators drew a link between two seemingly unrelated texts; the Biblical tale of the Israelite spies sent to scout out the land of Canaan, and the lyrics of “America,” the famous song from “West Side Story.”

Broadway showtunes are usually not featured in the tomes of commentary on the Torah. But for the hosts of “Verses,” Rabba Rachel Kohl Finegold and adult Jewish educator Anita Silvert, finding those connections is the point.

“Where did Torah and Broadway meet for you today?” Finegold asked Silvert in the “America” episode.

“Broadway and Torah met with self-image,” Silvert said. “The way the spies saw themselves in the text [as weak compared to Canaan’s inhabitants] and the way Anita was ready to shed her identity and become an American, whereas the other girls saw themselves still as ‘the other.’”

Finegold responded, “I am imagining the showdown: on one side are all the spies saying ‘no, no we can’t,’ and on the other side the spies saying ‘yes we can,’ and the tensions of feeling pulled between those two perspectives. Which is right? They’re both right. There is fear at the same time that there is a dream.”

On “Verses,” Finegold and Silvert view both Broadway musicals and the Torah as sacred texts, and want listeners to connect with both.

“What makes a musical really succeed is its ability to tell a story that touches on not just the confines of the story on stage, but is able to address voices and themes and ideas and struggles that are universal,” Silvert said. “And that’s exactly what Torah does.”

Finegold added, “We’re forging new models of what spiritual leadership looks like, and I think that goes hand-in-hand with rethinking what we mean by teaching texts, or what we mean by Jewish studies.”

Finegold and Silvert met at a Chicago-area Limmud, the Jewish learning conference, when both lived in the Windy City almost a decade ago. Now working in different cities — Finegold is the director of education and spiritual enrichment at Congregation Shaar Hashomayim in Westmount, Quebec, and Silvert is an independent adult Jewish educator in Chicago — the cohosts select a song from the Broadway canon and match it with a selection from the Biblical canon, putting the texts in conversation with one another.

For example, they’ll compare “America” with the story of the spies, or use “Les Miserables” and a text from Exodus to consider the complexities of personal identity in the lives of Moses and the “Les Mis” protagonist Jean Valjean. Finegold said the song “Satisfied” from “Hamilton,” which gives life to one sister’s heartbreak and the other’s elation, is “a natural fit” with the story of sisters Rachel and Leah in Genesis.

Silvert trained in voice and music education; spent time as a touring folk musician, singer/songwriter and musical theater performer; and has a master’s in Jewish education. She called theater and adult learning “passions that have gone side-by-side.” For her part, Finegold thinks of theater as a “road not taken” — the road she did take went through Yeshivat Maharat, the first Orthodox yeshiva in North America to ordain women as clergy — but realized that bringing Broadway and Torah texts into the same learning space could be a way for her to express her voice without performing.

“We’re two Broadway geeks and Jewish educators geeking out on the two things we love most,” the duo said, nearly in unison.

“It was a natural match,” Finegold said. “When you team-teach something, and each educator comes with a different piece of it, it’s more rich. And that’s been the case for us.”

During the pandemic, Finegold said, she was trying to craft an adult education program that would help her community to connect with each other and feel uplifted. She considered the idea of change, or to craft a class around tragedies in Jewish life, but the synagogue’s program director challenged her to find something “a little more upbeat.”

Finegold started examining the lessons in the lyrics — centering on one Broadway song, one Jewish text — and teaching them in her online classes; Silvert joined as a participant at first, and then the pair started discussing the idea of co-hosting a podcast.

The implementation was fairly easy, Finegold said; her husband, Rabbi Avi Finegold, runs Jewish Living Lab, a Montreal-based hub for Jewish education that produces several podcasts, including “Hyphen,” a series of dialogues that explore Judaism and Christianity, and “Remix Judaism,” a podcast companion to the book Remix Judaism by Roberta Rosenthal Kwall, about tradition in the modern age. Including “Verses,” the three podcasts are funded by a Nova grant from The Jewish Community Foundation of Montreal. Rachel Finegold said the grant funding is designated to pay the co-hosts and for technical editing and production costs.

“Just to speak to the interconnectedness of these two bodies of work, we use the word ‘canon’” to apply to both Broadway and Bible, Rachel Finegold said, “and the word ‘verses,’ which became, of course, the name of the podcast, both are sacred to some people. And both are multi-layered. So many of these classical themes that show up in biblical text also show up in good art, in a good plotline.”

The podcast — which launched in November  — is also breaking through to people who never considered the meaning of Jewish texts, Silvert said, including a musical theater friend of hers. “His Jewish awareness has not been great at all. But this has opened up an entire new world of questions that he has to ask on Jewishness that he never asked before. So it’s magical to see.”

The podcast hosts also create source sheets for conversations around their episodes. “I often think about the podcasts as kind of a side door into studying Jewish texts which makes them more accessible,” Finegold said.

Season one of the podcast will be complete when the two remaining episodes are released this month: one will feature “Rain Song” from the show  “110 in the Shade,” and juxtapose a rainmaker from the show with the Talmudical story of Honi the circle-maker; the other will highlight “Blankets and Bedding” from “Come From Away,” and focus on texts in Genesis relating to hospitality. Season two is scheduled to launch in March.

Finegold will also be teaching a class that will go deep into “Les Miserables,” positioning Jean Valjean, the musical’s bread thief-turned-mayor, as a representative of compassion, and police inspector Javert representing justice and the role of repentance. “Which one is going to win out in the end? Can people change? Do we evoke mercy? Or do we stick with black and white?” Finegold asked.

“The significant thing about this is that we’re revealing new Torah,” Finegold said. “When you take ‘Les Mis’ and you look at Torah through that lens, you’re understanding this Torah text from a new perspective, and we’re also revealing new insights into these musicals.”

“Rabba Rachel is most familiar with the newer musicals, which I love,” Silvert said. “But there is a lot to be mined in older ones, too,” adding that a few of the early musicals will appear in future episodes. “Good lyricists, like good Bible text, like good stories, invite analysis and taking time to dive into them.”

Finegold added that she thinks the genre has moved toward “more complexity over time,” and cited the work of Stephen Sondheim, who was known for intricate lyrics, multilayered characters and complex stories. Finegold said that analyzing these texts is “easiest when there is deep character or story development, which gives opportunity to do deep dives into the musical alongside the Bible text.”

“This is what the pandemic taught me is, if we lighten it up and bring joy and bring authenticity to looking at Jewish tradition, there’s some spark that gets lit,” Finegold said. “That becomes this magnet that people want to be part of.”