Sexton and Clinton were both honored for their international activities 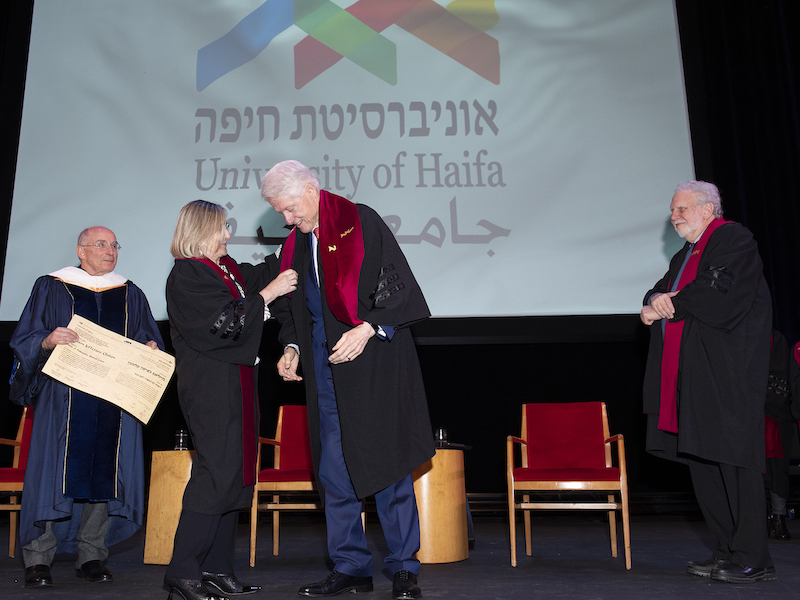 Bill Clinton (center) receives an honorary doctorate in New York City from the University of Haifa on Dec. 12, 2022.

A ceremony that felt at once formal and intimate honored two former presidents for their work building enterprises across the globe — one a former leader of New York University, and the other the former leader of the free world.

The two men, John Sexton and Bill Clinton, received honorary doctorates from the University of Haifa at an hourlong event last night at New York University, in an auditorium across the street from Manhattan’s Washington Square Park. Ron Robin, the University of Haifa’s president, said a global perspective also inspired his school, which he said was Israel’s most diverse university, and which is located in a city historically known for good relations between its Jewish and Arab populations.

“Building a shared society [and] creating global networks are really the only way to face the environmental, social and health crises that affect us all,” Robin said. “Our goal is to create a new, pluralistic and inclusive Israeli middle class that will rise to the environmental and human challenges of the region and the world.”

Sexton and Clinton were both honored for their international activities. Sexton presided over NYU at a time when it opened up outposts worldwide. It now has three campuses that grant degrees — in New York, Abu Dhabi and Shanghai — as well as a dozen more campuses worldwide, from Madrid to Sydney to Tel Aviv. His doctorate was given “for pioneering the global network university, promoting cross-cultural sensitivity, and offering students and faculty opportunities to engage in innovative research.”

Clinton received the doctorate in recognition of his activities as president and of his work at the Clinton Global Initiative, his family foundation that focuses on climate, public health and economic development. His doctorate was given for his “promotion of democracy, advocacy of human rights, and humanitarian assistance,” and for “improving the lives of millions around the globe.”

The event had the expected trappings of academic formality. A procession of people in gowns and hoods walked slowly down the aisle behind a group of bagpipers playing “Hava Nagila.” Clinton and Sexton’s robes both featured custom embroidery by Israeli artists. The speech introducing Sexton, by Katherine Fleming, president and CEO of the J. Paul Getty Trust and a history professor at NYU, included a lengthy quotation in Greek.

“Lest I have not yet been pretentious enough, allow me to invoke Marcus Aurelius,” Fleming said, drawing a laugh. Her Greek quote from his writings, she said, means, “What injures the hive, injures the bee,” an adage she said speaks to Sexton’s “commitment to others.”

And yet, the two honorees did not appear constrained by the gravity of the occasion. Both praised the University of Haifa and each other — and deprecated themselves. Recalling an NFL game he attended with Barbra Streisand and Dan Rather, Sexton described himself as, in the words of his son, a “comma person,” because at the time he had to be introduced as “John Sexton, comma, the dean of NYU law school.”

Clinton stood up to give a speech directly after receiving his honor, and was gently told to take a seat. When he was asked soon afterward to return to the lectern, he said, “The last time I tried it, it didn’t work out so well.”

Both Sexton and Clinton delivered sincere messages as well. Sexton paid tribute to his late wife, Lisa Goldberg, the former president of the Charles H. Revson Foundation, who died suddenly in 2007 and who, he said, “did everything according to the doctrine of tzedaka,” or charity. As president of NYU, he said, he was “representing a common enterprise of talented men and women who chose to join an enterprise of hope and progress for the world.”

Clinton was presented with his robe by Tova Sagol, of the Israeli philanthropic family of the same name, as well as the artist Marina Abramovic, and was introduced by the philanthropist and real estate developer Eddie Trump (no relation to the former president). In his speech, Clinton recalled seeing an interfaith group of NYU students travel to New Orleans to help in the recovery effort after Hurricane Katrina.

He also praised the artist who embroidered his robe, Batia Shani, because he learned that she first met him at the funeral of former Israeli Prime Minister Yitzhak Rabin, with whom Clinton worked closely before Rabin was assassinated.

“I will treasure this for the rest of my life,” Clinton said. “I loved him very much, and I miss him still.”