Through Instagram, ceremony and celebration, synagogues in New York City and beyond mark the centennial of the first bat mitzvah

The Society for the Advancement of Judaism, the Manhattan synagogue that hosted Judith Kaplan's bat mitzvah in 1922, held a series of events to commemorate the occasion. 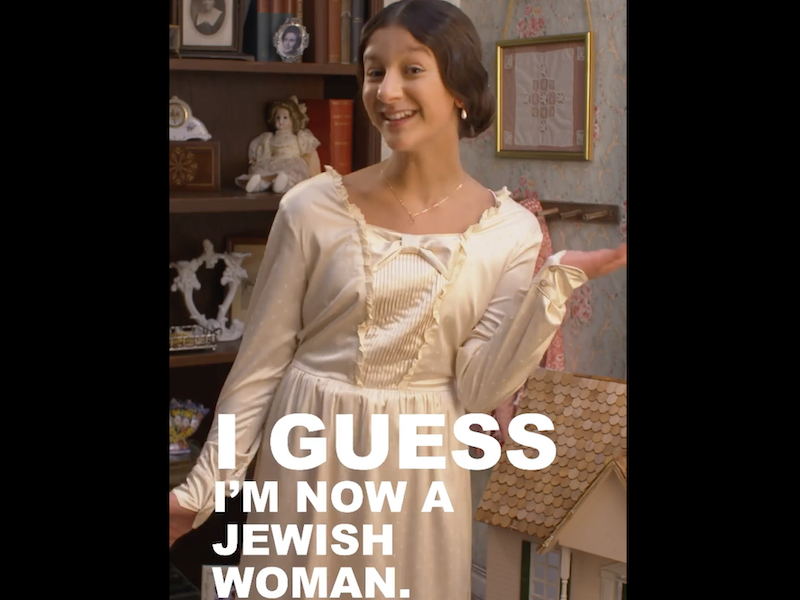 An image from @judithkaplan1922, an Instagram account created by the Society for the Advancement of Judaism aiming to bring the first bat mitzvah, celebrated 100 years ago, to life. Actor Dylan Tanzer plays 12-year-old Judith Kaplan.

When Judy Kaplan thinks about her “bas mitzvah,” as she calls it, using the Ashkenazi pronunciation, she is “#stressed,” she tells her Instagram followers in a series of videos.

She’s been practicing, but her father is being very demanding about her pronunciation of the blessings before the Torah reading, and she’s overheard her grandmothers arguing about whether she should even have a bat mitzvah. She’s nervous, excited, and eager to share her thoughts online. In other words, Judy is a regular 12-year-old — except that she lived a hundred years ago. The Instagram account in question, @JudithKaplan1922, is a dramatization of the first bat mitzvah in American Jewish history, celebrated by Judith Kaplan on March 18, 1922.

“Today, out of the blue, Papa told me that at our new shul, girls will be able to become bas mitzvah just like the boys become bar mitzvah,” Judy, played by actor Dylan Tanzer, 12, says in her first video. “But no one’s ever done that before… And I said, ‘Sure, why not!’”

The Instagram account is one of many initiatives and events being held around the world in celebration of the centennial of Kaplan’s bat mitzvah.

On Thursday, March 17, 450 people gathered virtually and in person for a commemoration event held at SAJ, the same Manhattan synagogue where Kaplan celebrated her coming of age. SAJ, previously known as The Society for the Advancement of Judaism, was founded by Rabbi Mordechai Kaplan, the founder of Reconstructionist Judaism and Judith’s father. The event was the kickoff for a milestone weekend featuring performances and remarks by rabbis, scholars and elected officials, including New York Gov. Kathy Hochul, the state’s first female governor. Speaking at the event, which took place on the same day as Purim, SAJ Rabbi Lauren Grabelle Herrmann compared the young Judith Kaplan to the biblical Queen Esther.

“Judith Kaplan Eisenstein, being in the right place and at the right time, and in the right family, and gifted with certain talents and abilities, put fear and uncertainty behind her and stood up at this synagogue,” Grabelle Herrmann said, “and became the first bat mitzvah in the history of the United States. And in doing so, in the vein of that other Jewish heroine, she changed the course of Jewish history forever.”

Some speakers at the event suggested that Jewish coming-of-age rituals could undergo new major shifts. Rabbi Mira Rivera, the first Filipina-American woman to be ordained at the Conservative Jewish Theological Seminary, spoke about her experience with Jews of color who have been overlooked and excluded in synagogues.

Rabbi Tamara Cohen, chief program officer at Moving Traditions, the Jewish teen education organization,  suggested shifting away from gender binary language in the Jewish teenage coming of age ritual by, for instance, calling it a ‘b’mitzvah’ instead.

Commemorations of Kaplan’s bat mitzvah stretched beyond Manhattan. On the Friday night and Saturday morning of March 18-19, at least 150 congregations across the country and world marked the occasion in their services or programs, Grabelle Herrmann told eJP.  The Jewish Women’s Archive and SAJ also invited Jewish women of all backgrounds to record and share their own bat mitzvah experiences. All over the world, hundreds of people — including celebrities like Ilana Glazer, Mayim Bialik, and former U.S. Rep. Gabby Giffords (D-AZ) — shared photos and reflections on social media with the hashtag #batmitzvahat100.

The @judithkaplan1922 Instagram account aimed to reach today’s 12-year-olds. Its content is based on interviews with Kaplan and historical documents from that time period, and features video posts from “Judy” talking about her “bas mitzvah,” the books she reads and her love for music. The Instagram project was inspired by @Eva.Stories, a 2020 Instagram project that reimagined a Holocaust-era teen’s experience, said Mik Moore, the founder of New York boutique creative agency Moore+Associates, which created the Judith Instagram account. The videos were produced by Ironbound Films.

Moore wants pre-teens “to have something that they can watch as part of that preparation to understand this historical moment and where the bat mitzvah came from, and to make a connection between what they’re doing now, in their studies, and what Judith did 100 years ago.”

Moore wrote the script in partnership with what he described as “a writers’ room of 12-15-year-old girls and nonbinary folks who know Instagram and gave feedback.” Moore’s family has longtime connections to SAJ. His grandparents were married by Kaplan’s husband, Ira Eisenstein, who served as a rabbi at SAJ from 1931 to 1954.

Kaplan’s bat mitzvah experience was very different from the ritual we recognize today, Grabelle Herrmann told eJP, because Kaplan was only told it would happen on the preceding night, and she didn’t chant directly from a Torah scroll. Nonetheless, Grabelle Herrmann said, “it was an opening of a door that swung eventually wide open.”

“We succeeded in bringing the bat mitzvah into the center of the conversation in the Jewish community, utilizing it as a moment to take stock of where we have come from, to appreciate all the girls and women who have paved the way for our current generation to take the possibility of bat mitzvah for granted,” she said. She added that she hopes the Jewish community takes the anniversary as an opportunity “to consider how we can use this example of change to make Jewish ritual and community more open and accessible to all, so that everyone can feel ownership of Torah and tradition.”