Healing Ink, a project of Artists 4 Israel, gives free tattoos to survivors to help them heal from trauma 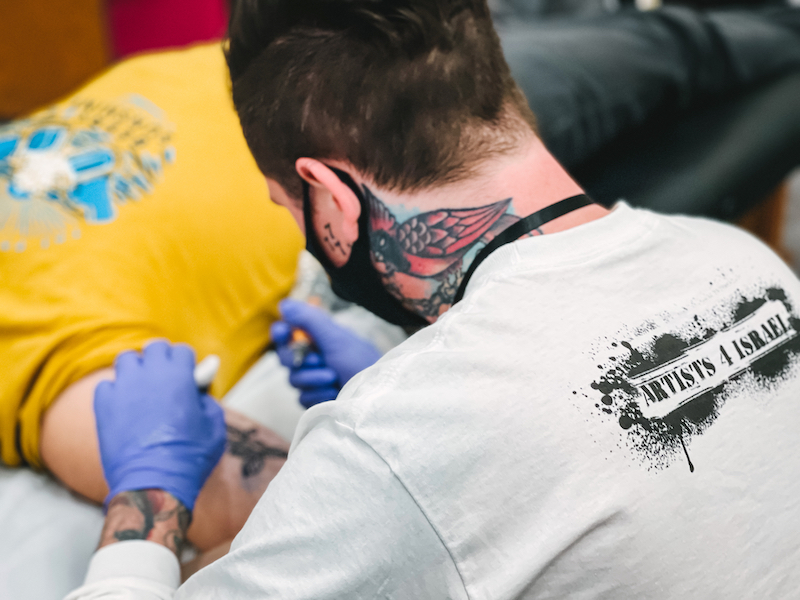 Late last month, Pittsburghers gathered for an event that may have felt unexpected in a Jewish context: a pop-up tattoo parlor meant to commemorate the 2018 Tree of Life synagogue shooting.

At and after the event, which was hosted at the local Jewish Community Center, approximately 15 survivors, families of victims, first responders, and community leaders got body art related to the attack. The ink ranged from the slogan “Stronger than hate,” which spread following the attack — the deadliest antisemitic attack in U.S. history — to Hebrew words to an image of a tree. It was organized by Artists 4 Israel CEO Craig Dershowitz, a Jewish activist who — despite the traditional Jewish prohibition on tattoos — sees body art as a way to help people process tragedy.

“Our goal, as always, was to help heal those who were harmed, and [we] saw tattooing as a way of getting past some of that trauma, to honor the heroes that run at the shooter instead of away from him,” Dershowitz told eJewishPhilanthropy after the Pittsburgh event. “But we had a very special mission this time, which was to share the story that antisemitism and racism are the same, that antisemitism is on the rise in this country, that when left unchecked, it has deadly consequences. And that we need to stand up and fight it.”

Dershowitz himself is heavily tattooed, or as those in the tattooing community call it, “covered” — much of it with Jewish themes. His first tattoo, on his back, depicts the sefirot, or divine attributes, of the Kabbalah to remind him of his potential as a human being. Other art includes the word “Zion” and a portrait of Zionist leader Ze’ev Jabotinsky.

Dershowitz is the founder of Artists 4 Israel, an arts and advocacy group best known for painting graffiti murals at sites of terror attacks and for its Healing Ink program, which provides tattoos for free in order to address trauma or mark challenges that have been overcome. He identifies as a lover and curator of art “who is aware of its potential and power in a way that I think many others are not,” he said.

“Healing Ink came out of my own realization that I use tattoos as a way to commemorate momentous occasions, as a way to find relief from pain and suffering, as a way to do magnificent emotional work,” he said. “Tattoo is a form of artistic expression, the idea of trying to elevate the self and be the best person possible.”

Using body art in a Jewish context presents a challenge for those who adhere to a verse in Leviticus that says not to “incise any marks on yourselves” and is understood by rabbinic tradition to forbid tattoos. Dershowitz has his own interpretation of the verse: He believes the word “incise” can be understood to mean cutting of the flesh rather than tattooing, or that the prohibition on tattoos may have come about because in past eras, skin markings were part of idol worship. In 2020, Artists 4 Israel held a series of conversations with four rabbis — three Conservative and one Orthodox — to talk about tattooing in Jewish law.

Dershowitz founded Artists 4 Israel in 2010 after being inspired by a Birthright trip. Along with the graffiti murals, it brings artists to Israel to do charitable projects, including free tattoos for former soldiers injured in battle and for survivors of terror attacks. The group also provides a PTSD prevention toolbox to Israeli children that includes art supplies and toys curated by mental health professionals and artists.

The first Healing Ink event was in Israel in 2016, where the group tattooed participants at Jerusalem’s Israel Museum and at the site of a Tel Aviv terror attack. Ever since, Dershowitz says Healing Ink “has been covering the scars of terror survivors and IDF soldiers injured in combat, helping them reclaim their bodies and continue to heal physically and emotionally.” Trips to Israel ran annually until COVID-19 hit. Now, Healing Ink works with local tattoo artists to run events in Israel.

In 2017, the organization started holding events in American cities that had been impacted by terrorism or another mass-casualty incident, from the 2016 Pulse nightclub shooting in Orlando, Florida to the Pittsburgh attack.

“It’s been three years. It’s never going to go away,” Eric Mallinger, grandson of Rose Mallinger, one of the Pittsburgh victims, told WPXI, a local TV station. He and his sister Amy both got tattoos of roses in memory of their grandmother.

“When you think about it, it’s a lot, it’s definitely hard,” Mallinger said. Regarding the event, he added, “It helped the healing process, and of course I wanted to be a part of it.”

Dershowitz says the American events also have an Israel advocacy angle. “Part of the goal of doing that in the States was to draw a direct line, for those who would hear about [the event], between terrorism in this country and the hatred and violence plaguing Israel,” he said. “Terrorism stems from very much the same poison well.” The first American event focused on the attacks of 9/11/2001.

Artists 4 Israel gets hundreds of applications for potential Healing Ink tattoo recipients per event; part of the application process is describing what kind of tattoo they’d want if they’re selected.  Dershowitz then matches each recipient with an artist who works with them to determine the final plan for the art.

“For some it’s covering the scar so they never see it again,” he said. “For people who have emotional scars, it’s the cathartic release of taking something emotional, making it physical and kind of letting it go.”

One thing most tattoo recipients have in common is the desire to reclaim agency and control over their own lives, he added. “What was visited upon them was done without their willingness and has forever changed their life,” he said. “Getting a tattoo is grabbing themselves back and saying, ‘I am the master of my own destiny. I am the narrator of my own story. I choose how my body looks. I make the choices’ and Artists 4 Israel and Healing Ink is simply allowing for them to do so.”

As Artists 4 Israel’s sole employee, Dershowitz sometimes has a hard time managing the difficult task of accepting and rejecting tattoo applications. He found that he was experiencing “vicarious trauma” while reading through applications, he said, which made him “despondent, almost, for like two days.”

Managing the recipients’ decision-making process can also be challenging. In one instance, the parents and sister of a 20-year-old shooting victim wanted tattoos of his signature; At the last minute, the mother had trouble settling on a design and color. Dershowitz was afraid that her indecision would annoy the artist. But Dershowitz’s wife noticed his frustration and reminded him that the woman in question hadn’t been able to control anything since her son’s death, so he should let her take the time to choose the right red. “I’ve tried to be a whole lot more sensitive ever since then,” he said.

And while novices may be hesitant about tattooing, Dershowitz says he has no regrets about the  ink on his own body.

“I love them all,” he said, regarding his tattoos. “The meaning changes, but it’s always going to be symbolic and representative of the time and place and emotion when you did get that tattoo… For people who have a few, each one is of greater symbolism; for me being part of the tattoo community is what’s so important.”