We are not a theocracy, yet policies that are baked into conservative Christianity dominate conversations about our personal rights,- from prayer in schools to nativity scenes in front of government buildings to reproductive rights. Time after time, we see that the separation of church and state does not apply when it is their church and their state.

Last week’s Supreme Court decision clearly exemplifies how religious liberty only applies to one group in the United States: the religious right.

We are not a theocracy, yet policies that are baked into conservative Christianity dominate conversations about our personal rights, from prayer in schools to nativity scenes in front of government buildings to reproductive rights. Time after time, we see that the separation of church and state does not apply when it is their church and their state. 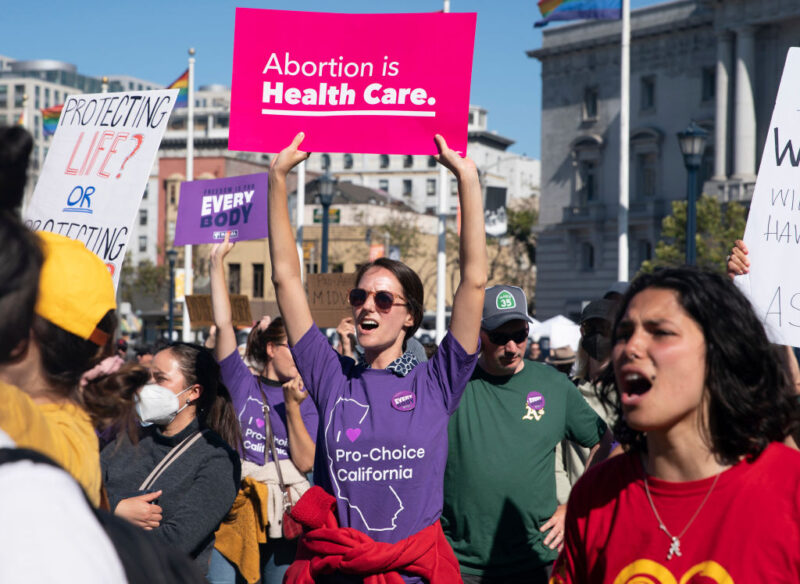 Not only is this fundamentally false, but it is an egregious attack on my religious liberty as a Jew. Access to abortion is a Jewish value. Comprehensive medical care (as exemplified by kavod habriyot, human dignity) is a Jewish value. The prioritization of the life and well-being of the living person over the rights of a fetus is a Jewish value. Where is our protection?

Support for abortion is throughout the Jewish community overwhelming, as polls show that 80%-90% of Jewish Americans believe that abortion should be legal in most or all cases. But now that Roe v. Wade is overturned, do we really think a Jewish person would be able to bring a lawsuit against the ruling on the basis of religious liberty?

As a Jew, I adhere to one religion. However, I staunchly believe that, just as people should have freedom of religion, they should have freedom from religion. I do not impose my religious beliefs on others, and I should be able to expect the same. We should not be governed by the beliefs of a small group of fundamentalists. We should not have to follow the beliefs of one religion solely because they are the ones sitting on the Supreme Court. And most importantly, we deserve the right to our own beliefs, our own opinions and our own bodies.

Regardless of what anti-abortion groups say, abortions have been around for generations. My own great-grandmother was a poor immigrant who did not have access to money, let alone proper healthcare. She, her husband, and their four children lived in a one bedroom tenement on the Lower East Side, where they barely scraped by on a daily basis. Twice her daughter recalled having walked into the kitchen in the middle of the night, seeing her mother on the kitchen table having an abortion at the hands of a local expert and her knitting needles.

Just as prohibition did not stop drinking, repealing Roe v. Wade will not end abortions. But it will harm our society’s most vulnerable populations. It will make reproductive care inaccessible to the people who need it most. It will silence the voices of those that go unheard in favor of those who speak the loudest. It will create a system in which the government and religious fundamentalists have more control over women’s health and bodies than the women themselves do.

As Jews we’ve always fought for justice and for those without a voice and without power. At the Central Conference of American Rabbis – the organization I am proud to lead – we have affirmed the “right to terminate a pregnancy” since the 1960s. The CCAR “opposes amendments and legislation which would abridge or circumscribe this right.” This decision violates the rights and religious freedom of Jews and others whose religious traditions, like mine, permit abortion. Where is our freedom? Do we matter less?

This decision is devastating, and we are all exhausted. But we must show the world that we will not stop fighting. We will not stop supporting our mothers, our sisters, our friends, ourselves — anyone who may need to terminate a pregnancy for any reason. We cannot back down now.