The miracle of small miracles (Hanukkah 5782)

Hanukkah is a unique opportunity to discover that the small things are the big things and to appreciate all we take for granted in the rush of daily life.

Mythical stories in all cultures, which developed mostly before literacy was common, rely on portentous and unusual images to be memorable: Elijah ascending to Heaven in a chariot of fire; the Red Sea splitting for the Israelites; Jesus walking on water. These images violate the apparent order of things, so once you visualize them, your brain will make sure you remember them for good.

This makes Hanukkah’s central miracle —the miracle of the oil — a little puzzling. Let’s face it: As miracles go, it’s a really paltry one. Yeah, okay, the little jar of oil was supposed to last for one day and lasted eight. Nu? Groise metzieh, as my grandmother would say. After fighting the Greeks for years, couldn’t we wait for a few more days to light the menorah? Would somebody have died if we hadn’t lighted it that day? What about running to the market and buying more oil? Making this relatively inconsequential miracle an essential part of the holiday is even more bizarre since one can argue that the victory of the Maccabees was a much more resonant one. What is more noteworthy to you: That a ragged band of farmers defeated the mightiest empire of its time, or that a jar of oil lasted longer than it should have? 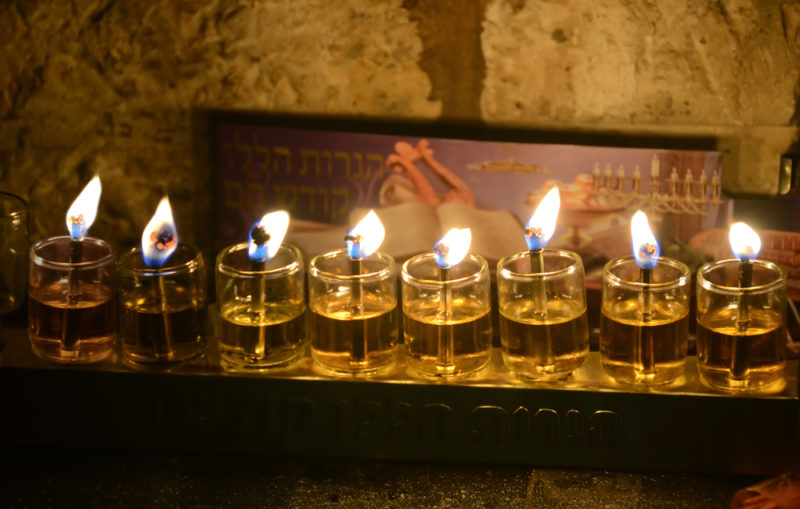 And don’t tell me that the peace-loving rabbis wanted to downplay the Maccabees. I know that, and it doesn’t answer the question: once they were shopping for a rival miracle, couldn’t the sages find something a little more spectacular? Perhaps something with good, old-fashioned thunder and lightning, or a river turning into blood or at least a sound effect or two?

But what if the selection of such a modest miracle is not a coincidence or an afterthought? What if, just for Hanukkah, the rabbis didn’t want anything ostentatious at all? Could it be that there’s a hidden message in celebrating a small miracle that should have been barely worthy of notice?

Maybe the rabbis focused on the modest miracle of light to make us consider the infinite number of tiny, seemingly inconsequential miracles that make up our life. We don’t notice them, we hardly value them, but they are there, making our life possible. And beautiful.

Think about it: The possible combinations of human DNA are more than 70 trillion. That means that you have just one chance in 70 trillion of existing. One different combination of genes and you wouldn’t be you. You being born is the equivalent of you winning the lottery 250,000 times in a row.

Or think about this: If the force of gravity were one millionth of a degree different, the Earth wouldn’t exist; or if the proportion of oxygen in the atmosphere was one percentage point less than the current 19.8, we wouldn’t be able to live. Every time you breathe, open your eyes, speak — every time you feel anything — it’s because you hit the jackpot a billion times over.

But cosmic daily miracles are not the only ones we ignore. Tiny miracles of experience go unappreciated in everyday life. The French author Phillippe Delerm lists some of them in a delightful little book called “La Première Gorgée de Bière et Autres Plaisirs Minuscules” (the first sip of beer and other minuscule pleasures). Listen to him describe this most trivial of actions: “It starts before the sip itself. When we feel the velvety fluid gold on our lips; the freshness amplified by the foam. Then we feel on our palate a satisfaction sifted by the bitter taste. How long it feels, that first sip! We feel a well-being that seems infinite, pointed by a sigh, or a click of the tongue. We savor the color, the faux-honey, the cold liquid sun. In a ritual of patience and wisdom, we seek to master the miracle that just happened, and just escaped us.”

Delerm celebrates “the naked life, the trivial life, life just as it is.” He cares about those little moments of existence, and he touches them with emotion, sensuality, and sheer amazement. He refuses to be bored by what is usual, and he encourages us to see the miracles all around as an inexhaustible fountain of optimism and joy.

Maimonides, the greatest Jewish philosopher, was sometimes accused of not believing in miracles. He said that a miracle is “something that happens when it’s supposed to happen.” That was generally interpreted as denying the supernatural quality of those events. But what if the old sage wanted to say the opposite: that the fact that things happen at all is a miracle, that every natural phenomenon is an unappreciated wonder?

On Hanukkah, as days grow darker and colder, we are told to value the most banal of things: A tiny bit of light. We are instructed to celebrate a minor miracle that can stand for the multitude of marvels that make up every day of our lives. It’s forbidden to use the Hanukkah candles for practical lighting; they are there “lir’otam bilvad” (only to look at them), only to appreciate something that usually goes unnoticed. These candles shake us from our complacency, awaken us from our entitlement, and make us grateful for every little thing and every single person that make our life worth living. They remind us to be amazed at everything that surrounds us, from the vastness of the firmament to the changing colors of a chameleon; from the roundness of an apple to the salty smell of the ocean; from the miracle of life to the pleasure of the first sip of beer. The menorah reminds us that every heartbeat is a miracle, that every feeling is a wonder, that every minute on this Earth is full of promise and potential.

It is fortuitous to speak about this as we emerge from the long pandemic night, as we rediscover the many simple things that we took for granted in the pre-COVID days: Seeing elderly relatives, hugging our friends, enjoy the scent of freshly cut grass unfiltered by a mask, seeing our colleagues at the office and chatting by the water cooler. If there’s a silver lining to that ugly illness that caused so much death and suffering, it is that, like Hanukkah, it made us aware of the many miracles and joys of our daily lives. It made us see the beauty of the trivial and the necessity of the unassuming. It made us more tolerant to life’s annoyances and more attuned to the many gifts it offers; like those of us who gladly take the unpredictable commute on the F train if it brings us back to the office and close to our colleagues.

Whether or not our sages intended it that way, Hanukkah is a unique opportunity to discover that the small things are the big things and to appreciate all we take for granted in the rush of daily life. When you look at those tiny flames that crown the Hanukkah candles, allow yourself to be mesmerized; fill yourself with gratitude, lose yourself in wonderment at the irregular dance of the fire; think of the millions of miracles that make up the most common of elements. Because one little flame can encompass all the miracles of the universe.