The Jerusalem Cinematheque is putting Israeli movies and newsreels online 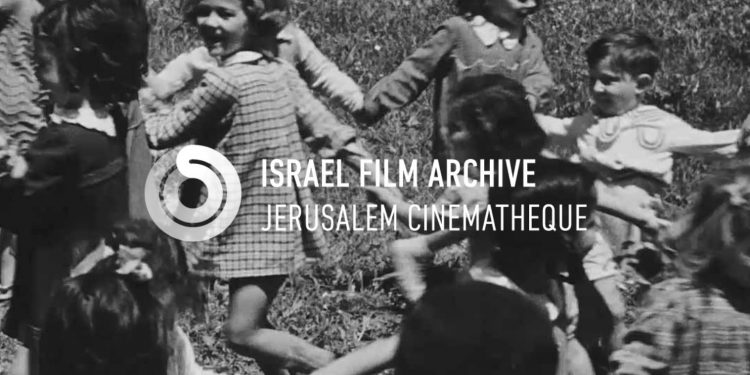 The 1928 Purim parade in Tel Aviv. The Zionist Congress of 1937. David Ben-Gurion declaring the State of Israel in 1948. Video from all three moments, in addition to countless others, are now available for viewing on an English-language website, thanks to a $10 million effort through the Jerusalem Cinematheque led by philanthropic Israeli families and supported by government funds.

“The platform is a public treasure,” said Dafna Jaglom on behalf of her family’s Diamond Charity Foundation. Jaglom, herself a filmmaker who studied at New York University, served as an advisor on the digitization process and the creation of the website. The Jaglom family contributed $1 million toward the project to purchase two digitization machines, for both images and audio.

The website, whose Hebrew-language counterpart went live in 2020, offers both the movies Israelis have made, and the country’s history as captured on the medium going back to 1896.

The Cinematheque, an arthouse theater and cultural center that also houses the Israel Film Archive, has been digitizing its holdings since 2015. Other supporters include the Beracha Foundation and the Matanel Foundation, in addition to Israel’s National Lottery, the Jerusalem Development Authority, the Ministry of Culture and Sport and the Ministry of Jerusalem and Heritage, said Jonathan Wolf, an archive spokesman.

The website offers access to a selection of Israeli feature and documentary films, in addition to every newsreel produced in Israel from 1927 to 1972 and home movies made both by Israelis and tourists. It includes films produced or collected by the state and cultural institutions like Yad Vashem. Users can search for 8,000 terms, including keyword or phrase, year, landmark and location, and the names of 4,000 public figures to explore the materials.

“The history is amazing,” Wolf said. “You can see Tel Aviv before it was Tel Aviv. You can find Albert Einstein visiting Israel. And we almost lost these things — they were in those old tin cans.”

While the website offers visitors a choice between its “artistic” and its “historical” offerings, the digitization project’s roots are artistic. The archive was a project of Lia van Leer, founder of cinematheques in both Jerusalem and Haifa and a refugee who lost her parents in the Holocaust.

She and her husband Wim Van Leer, a Dutch engineer, pilot, playwright and film producer, started the country’s first film club. In 1960, the club became the basis of the Israeli Film Archive. Lia Van Leer, who died in 2015, founded the archive to preserve Israel’s film legacy, even tracking down film reels abroad and repatriating them, Wolf said. The archive holds 96% of all the feature films ever produced in Israel, on both celluloid and formats such as 16mm, 35mm and Beta. The fruits of her labor now sit in four climate-controlled rooms, and until now were available mainly to filmmakers, academics and film buffs.

The website’s artistic offerings contain 300 feature films, most of which are available for free. For one year, the archivists are also offering 10 classic Israeli movies for $4.99 per view, including “Alex Is Lovesick,” directed by Boaz Davidson; “Halfon Hill Doesn’t Answer,” directed by Assi Dayan; and Avi Nesher’s “Turn Left at the End of the World.”

Reboot, the network of creatives who draw on Judaism to feed their work, is already talking with the Jerusalem Cinematheque about a collaboration in 2022 that will rescore older films, said David Katznelson, Reboot’s CEO.

“At Reboot we know the power of being able to see history with a new lens,” Katznelson said. “Taking some of the greatest modern musicians to create scores for some of these films will help not only bring them to a new audience but help that new audience translate them to the modern world.”

In Israel, the website has functioned as a kind of online photo album no one knew existed, facilitating connections between people and enriching people’s sense of their personal history on both the family and the national level.

Wolf likes to tell the story of the time an Israeli television program did a story on the archive that featured an image of what was believed to be a Yemenite woman in wedding garb, including an elaborate necklace. That day, the woman’s family contacted the station to correct the record: They’re Syrian, and they still have the necklace. The next day, they appeared on the program.

Wolf himself discovered footage of his grandfather at the family matzah factory consulting with a rabbi in the 1950s.

“We are doing this, also, to create a record for the next generation,” he said.