The Future is Haredi

One of the most significant findings in the recently released Pew study on Jewish Americans in 2020 is that Orthodox- and Haredi-identifying segments of the Jewish population are growing rapidly. Whether philanthropists and professionals working in the communal space are pleased or concerned by this data, the Jewish future in America will be brighter if we all open our eyes to it.

For decades, the largest segment of the Jewish population in North America belonged to liberal Jewish movements. Now though, the most growth is happening on the respective ends of the religious spectrum, Orthodoxy and “no particular [denominational] branch.” There is already a lot of communal interest in the latter population, and there is substantial philanthropy within certain Orthodox communities which keeps yeshivas and hesed programs operating. However, compared with efforts to “reach” unaffiliated Jews, the efforts to engage Orthodox populations as part of the project of Jewish peoplehood is markedly less developed. Orthodox and specifically Haredi populations should factor more into organizational and ecosystem-wide strategic thinking. 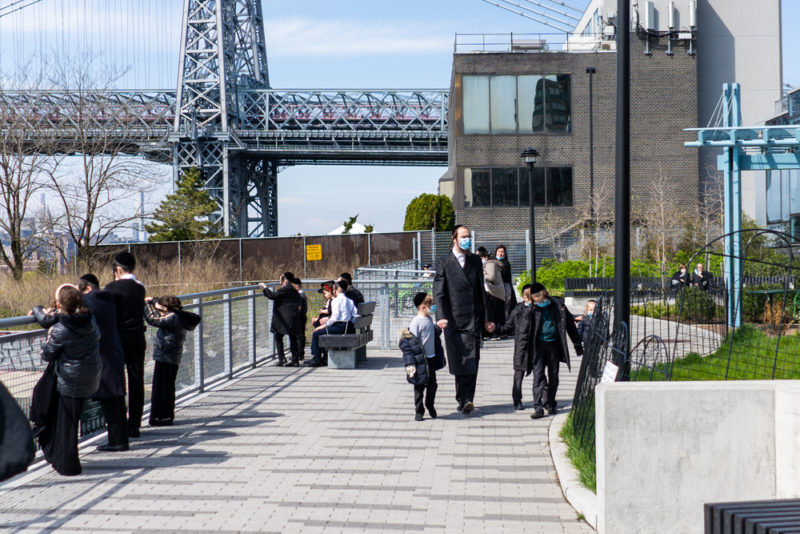 The Pew survey shows that while only 3% of adults over 65 identify as Orthodox, 17% of Jews under age 30 do. Approximately two thirds of Orthodox Jews are Haredi, or “ulta-Orthodox” – meaning Yeshivish and Hasidic, and a shrinking one third are Modern and Centrist Orthodox.

In significant part, this population momentum is due to birth rates. The Pew survey shows that Orthodox adults have double or nearly double the number of children (3.3) than their Conservative (1.8) and Reform (1.4) peers and triple the number of children compared to those who do not identify with a particular branch of Judaism (1.1).[1] These numbers are likely much higher among Haredim. In the U.S., on average, a Haredi woman has 6 children, but families with double that number are not uncommon in some communities.

There is more to the Orthodox growth story than higher birth rates.

Orthodox Jews generally raise Orthodox Jewish children. The survey showed that intermarriage is far more commonly practiced by non-Orthodox Jews[2], and while some intermarried couples raise their children to identify as Jewish, 98% of Orthodox parents do. Although some community members choose to leave Orthodoxy, the attrition rate would have to be breathtakingly high to outpace disparate birthrates.

Orthodoxy is also gaining adherents. Nishma social research identifies the top reasons Jews of other denominations give for why they became Orthodox: “Intellectual attraction or curiosity (53%), seeing Orthodoxy as more authentically Jewish (52%) and more truthful (35%), and connection to Jewish roots and heritage (36%).” Outreach efforts, especially those of Chabad, have successfully inspired many people to adopt Orthodox practice and sometimes identity.[3]

Additionally, more people who join the Jewish people are choosing to convert via an Orthodox path. Over the past two decades the Rabbinical Council of America (RCA), a Centrist Orthodox umbrella organization whose conversions are mostly accepted in Israel, has experienced significant and continuous growth in the number of conversion applications it receives.

Regardless of what initially attracts people, Haredi branches of Orthodoxy are growing faster than Liberal, Modern, and Centrist Orthodoxy combined, and many Orthodox synagogues and institutions are shifting rightward. If trends continue, and there is no reason to suggest they won’t, Haredi Judaism will make up the largest swath of the Jewish American population.

Why is all of this so important? Many Jewish umbrella organizations and philanthropists profess their love of the Jewish people and their interest in serving or influencing American Jewry. As time marches forward, to be truly influential in the American Jewish scene these leaders must include more Orthodox Jews in their vision for American Jewry – and its planning and execution.

There are two meaningful approaches in terms of how to focus funding and programmatic efforts, but to be successful, each will need to take changing demographic trends into account. The first approach is to swim against the tide and provide meaningful alternatives to Haredi Orthodoxy, and the second is to shift additional focus onto Orthodox populations and strengthen connection points with Orthodox leaders and institutions. Each of these approaches is valuable in its own way, and a healthy, diverse community will pursue both. However the data suggest that those leaders whose audience is “American Jewry” generally, should be placing increased emphasis on the second approach, which is comparatively de-emphasized and under-strategized. There are significant and field-changing efforts like Birthright, PJ Library, Moishe Houses, and Hillels that explicitly or implicitly provide meaningful liberal and non-denominational community and experiences. While some of these programs might touch the lives of some Orthodox people, Orthodox populations are neither their target audience nor their primary beneficiaries. These kinds of programs don’t exist to scale in the Orthodox and Haredi worlds, but especially as demographics continue to shift, they should.

The argument that most Haredi Jews don’t want to or cannot participate in these kinds of programs holds water. (Recall the Solidarity March in January 2020 from Manhattan to Williamsburg when Williamsburg Hassidim largely didn’t join the 25,000 people marching against antisemitic violence directed mostly at visibly Jewish people.) But that is also precisely my point. It is the prerogative of funders to use philanthropy to spread their particular values which may not fully align with Haredi Jewish values. However, for those who want to influence the future of the Jewish community in the US, rather than ignoring changing demographics, it will be necessary to grapple with the growing population of Haredi Jews and factor in the large young Orthodox population.

For those who are concerned with the direction of Haredi Judaism, funding programs that support a more moderate center or seed change can also have an outsized return on investment, especially as early interventions. What funders should consider though, is that education, empowerment, and inclusion will necessarily look different in an Orthodox community than in the secular/liberal Jewish world, and that is okay. Partnering with Yeshiva University, YCT, Yeshivat Maharat, Nishmat, JOFA, the OU or other Liberal, Modern, or Centrist Orthodox synagogues and organizations may be easier than partnering with Haredi institutions and will encourage a heftier counterweight. On a small scale, there is also great advocacy and alternative programming being done in education and women’s rights and community (Yaffed, ORA, and Ezras Nashim are well-known examples).

Impacting the greater Jewish community in the US will require additional learning, dialogue, and inclusion of Haredi communities. Haredim, like any population, are not a monolith – there are a plethora of cultural and religious groups within this umbrella. Going forward, Jewish communal leaders must broaden their understanding of the Jewish community and examine their own biases. Those with influence must consider the questions, “How can we best serve and shape the Jewish community as a whole?” “What are the barriers to partnership on both sides of the equation, and where are the points of connection?” A clear-eyed assessment of Jewish demographics and relationship-building with individuals and Haredi communities is needed to plan for and precipitate impact in the Jewish communal landscape from now on.

Lindsey Bodner is executive director at the Naomi Foundation.

[1]  Because of the way the study was conducted, this data does not necessarily reflect the actual family size of respondents. For example, an 18-29 year old respondent may not be finished bearing children.