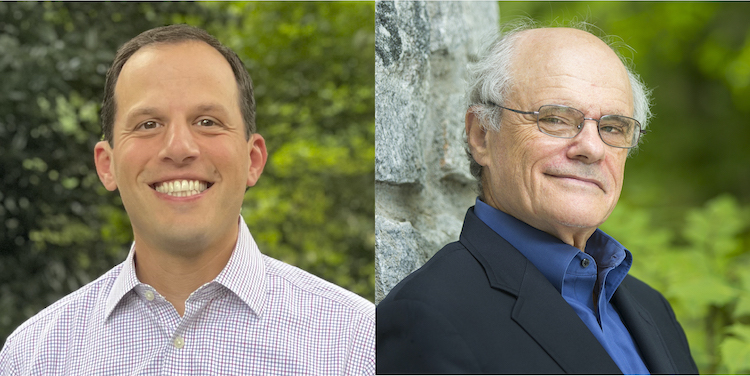 The Center for Israel Education (CIE) has appointed former day school leader Adam Shapiro as its new president, replacing founding president Kenneth Stein, who will become the organization’s chief content officer, Stein told eJewishPhilanthropy. The center’s core mission of creating educational materials will not change, Shapiro said, adding that he will focus on gaining wider digital distribution for that content, and on securing funding for the organization.

“I’m not a millennial. I’m not in Gen-Z,” said Stein, a professor who has taught contemporary Middle Eastern history at Emory University since 1977. “So bringing in someone who’s 35 years younger than I am makes all the sense in the world. It’s our reach that’s the major target.”

Shapiro and Stein have known each other since Shapiro, who graduated from Emory in 2001, visited the school as a teenager to help decide where he wanted to attend college. Shapiro was most recently the head of the Golda Och Academy in West Orange, N.J., where he created a course on the history of modern Israel using CIE sources that became a study-abroad program in Israel. When Stein founded CIE in 2008 to create resources, workshops and presentations about the modern State of Israel for students, educators and adult learners, he invited Shapiro to join the board.

Initially, CIE saw itself mainly as a creator of curriculum and a trainer of teachers. A day school initiative brings CIE materials into schools and helps train teachers to use them. The center’s growth on the internet, however, has broadened Stein’s vision of its audience.

“We started with educators, then started serving students, young adults, rabbis and then people on the internet,” he said. “We’re probably doing more work now with the general public than we’ve done with any other group.”

Israel education was a new field in 2008, which was also the year Anne Lanski founded the Chicago-based iCenter with support from the Jim Joseph Foundation, the Marcus Foundation and the Charles and Lynn Schusterman Family Philanthropies. The funders had noted the disconnectedness of American Jewry to Israel and the sometimes disconnected nature of Israel curricula and envisioned a field of Israel education with a shared philosophy around Jewish identity and standards of practice, according to a 2018 iCenter impact study.

CIE and the iCenter are two of four major players in the field, the others being Makom, the education arm of the Jewish Agency for Israel, and Birthright Israel, said Ben Jacobs, who directs George Washington University’s master’s degree program in Israel education, created in partnership with the iCenter and with funding from the Marcus Foundation.

“It’s important for there to be different organizations with different kinds of focus,” Jacobs said. “CIE, with its understanding of historical and modern Israel, is a key provider of resources. They can keep doing what they’re already doing well, and that would enhance the field.”

As Stein and other staff continued over the years to create content — such as “Forming a Nucleus for a Jewish State,” a set of maps and articles — they built the stock of materials on the website. When the coronavirus pandemic hit in March 2020, the site saw a spike in usage, from 598,000 unique users in 2019 to 1.4 million in 2020.

The most striking example of this evolution is CIE’s 2020 agreement with the Philos Project, a nonprofit that promotes Christian engagement in the Middle East. The Philos Project is disseminating some of CIE’s content, which the center has translated into Spanish, to an audience of evangelical Christians in Central and South America.

The deal with Philos could provide a significant revenue boost at a time when CIE is grappling with a decline in funding. In 2017, the group took in $1.4 million in grants and contributions, compared with $580,000 in 2018, the year of its most recent available tax filing. Stein attributes the decline to the shuttering of the Avi Chai Foundation, which had been CIE’s only lead funder. The foundation closed its doors in 2019 after spending almost all of its assets, according to a predetermined plan.

“I really enjoy doing that fundraising and looking for that kind of funder,” said Shapiro, who held a range of leadership positions at Golda Och Academy during the years that the Och family made an initial gift of a $15 million challenge grant in 2010, and then another $10 million challenge grant in 2021. “That is vitally important to CIE’s success.”

The CIE website already uses social media channels such as Facebook and LinkedIn, and plans to work on using these platforms to make its content more accessible by, Shapiro offered as an example, “turning an article into an Instagram infographic that can be shared.”

The organization will continue its core work with other Jewish organizations, such as RootOne, the Marcus Foundation-funded education-and-travel initiative that brings high school students to Israel and that is administered by the Jewish Education Project. CIE conducted several presentations for RootOne leading up to the trips that took place this past summer. CIE hasn’t yet placed its materials on the Jewish Education Project’s new Jewish Educator Portal, but will probably make that arrangement, since the two organizations work together frequently, Stein said.

“The challenge of this change is to have CIE do things that I couldn’t do,” he added. “As you get older, you realize what your limitations are.”