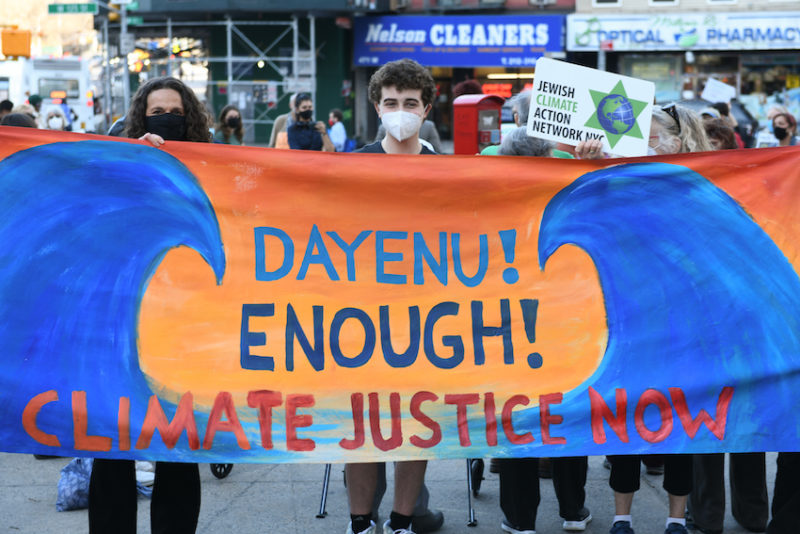 Rabbi Jennie Rosenn had already dedicated her career to the Jewish pursuit of social justice when, six years ago, she experienced an awakening to the climate crisis.

She had been reading more about the environment, both in the press and in reports from the United Nations’ Intergovernmental Panel on Climate Change. Then she went to San Francisco to visit her father during a heat wave. Rosenn knew that compared to other climate catastrophes, high temperatures in the Bay Area were relatively insignificant, but it was a powerful enough experience to give her a hint of the “apocalyptic” nature of the global problem.

“People had been talking about this for years,” she told eJewishPhilanthropy. “How did I not get this?”

She also came to realize that the unequal impacts of climate change on low-income and minority populations made the environment a social justice issue, and started to think about creating a new Jewish organization that would focus on environmental policy and ground its work in Jewish values, text and ritual. The result was Dayenu, which launched in April, 2020.

“This was not something to do lightly,” Rosenn said. “I don’t have thick skin. And it would be disruptive in certain ways. But we all need to be doing uncomfortable things right now to respond to this moment.”

The environment had never been a focus of Rosenn’s, who after ordination at Hebrew Union College-Jewish Institute of Religion, the Reform movement’s seminary, in New York City in 1997, founded a “Tzedek Hillel” — the public service program of Hillel International, the Jewish student life organization — at the chapter serving both Columbia University and Barnard College. (Rosenn received her bachelor’s degree from Columbia in 1991.) From there, she went to the Nathan Cummings Foundation, where one of her primary goals as a program officer was the creation of the field of Jewish social justice and service. Individual organizations were already operating, but they didn’t work together very effectively, said Shifra Bronznick, an activist and strategist who worked with Rosenn at the foundation as a consultant and is now advising Dayenu. When Rosenn left Cummings, she became a vice president at HIAS, the immigrant and refugee advocacy and aid organization founded more than a century ago to support Jewish immigrants from Eastern Europe.

Before starting Dayenu, she surveyed domestic organizations already working on domestic policy and the environment. She found groups focused on food, farming and education, like the Isabella Freedman Jewish Retreat Center and Jewish Farm School, and political organizations that worked on social justice issues — such as those who are members of the Jewish Social Justice Roundtable, but no group that had climate change and Jewish spirituality as its mission.

“The way these two sectors grew just left this gap,” said Rosenn, adding that she and the Dayenu staff want to make it a group that serves a broad population — from what she described as “JCC moms” worried about their children’s future, to millennials who are already climate activists, to Baby Boomers who are synagogue members but not political activists.

“Jews are concerned with the climate crisis, but most are not taking action on the systemic level that we need, and that science and justice demand,” Rosenn said. “People aren’t sure what to do.”

She hired Phil Aroneanu, who co-founded the environmental advocacy organization 350.org, to supply the expertise that would complement her knowledge of the Jewish nonprofit world, and suggested the name “Dayenu,” which means enough, to convey both anger and hope. It’s a statement of resistance against further environmental damage, but also a reference to the Passover Seder song that thanks God for various actions taken on behalf of the Jews, such as taking them out of Egypt and providing food in the desert, and states that each one of them would have been enough in itself, Rosenn said.

Early funders include the Dorot Foundation, the Lisa and Douglas Goldman Foundation and the Leichtag Foundation, among other grantmaking organizations and individuals, Rosenn said. It also received $200,000 as one of 10 racial and economic justice organizations named recipients of Steven Spielberg’s $1 million Genesis Prize, which Spielberg and his wife, Kate Capshaw, also matched, Rosenn said. Dayenu had a $1.4 million budget in its first year.

Leichtag usually funds organizations that are based either in Israel or near its home in Southern California, said Charlene Seidle, an executive vice president.

“Leichtag believes that philanthropy is the risk capital of social change, and we must address the problems of our time so we don’t pass them on to the next generation. Climate change is one of the most profound challenges our children will inherit,” Seidle said.

Dayenu had planned to launch in the spring of 2020, and when the pandemic hit, the organization’s leaders realized that it wasn’t the right time to start a new undertaking. But they couldn’t wait.

The pandemic helped Dayenu make the case that it was needed, Rosenn said.

“It showed us what happens when government doesn’t prepare for something, when we don’t listen to science,” she said.

Now, about a year later, the policy and organizing efforts are starting to gain momentum, and the group is beginning to make progress on the goal of integrating an explicitly spiritual dimension into their activism.

“This work needs a spiritual element to help people make the sacrifices that we will need to make because it’s so late in the game that we are taking on the climate crisis,” said Bronznick.

In the year since Dayenu launched, it has helped create 90 “Dayenu circles” of grassroots activists who participate in the group’s political campaigns.

Dr. Jack Gorman is a donor to Dayenu who helps lead a circle in New York City. As someone concerned about the environment, he was involved in Greenfaith, an international interfaith organization, and was disappointed to see that until Dayenu, there had not been a Jewish environmental group with a national presence.

“I thought that was a real deficit,” he said. “So I was excited to learn about Dayenu as really the first national Jewish climate group.”

Before the election, Dayenu mounted a get-out-the-vote campaign in which 43 other Jewish organizations partnered. About 1,000 volunteers participated in bi-weekly phone bank efforts.

This month, Dayenu will conduct a four-part training for more than 100 circle leaders that will help them organize and enlist volunteers in both local work and national campaigns, such as an effort to tell legislators considering the climate and infrastructure bill being debated by Congress that they support renewable energy and infrastructure improvements.

While Dayenu could build its policy agenda by following the lead of other organizations who have already established themselves as experts in this area, the Jewish-specific material needs to be created from scratch, Bronznick said.

When Dayenu was being created, some early supporters were hesitant about making spiritual support such an important part of its work, Bronznick said, but in the end, the group decided it couldn’t omit it, despite the challenges it presented.

Rosenn calls this aspect of Dayenu’s work “Spiritual Adaptation” because the goal is to help Jews and Jewish communities become accustomed to the frightening aspects of climate change. The group conducted a workshop — “Confronting the Climate and Cultivating Spiritual Courage” — around such teachings on concepts as shomrei adamah (guardians of the earth) and shomer ger yatom v’almanah (protecting the stranger, the orphan and the widow) with 10 Jewish communities and is now reviewing the participants’ evaluations of the experience.

It is also calling for new Jewish climate activist music. About 40 people composed and submitted songs, which Dayenu will produce and put on a playlist.

“We know that many people are living with fear, anxiety, guilt and the sense of disconnection that comes from going about one’s day-to-day business with the looming — or already present — threats to the safety and well-being of themselves and those they love,” Rosenn said. “Dayenu seeks to support Jews and Jewish communities to spiritually adapt to this new and terrifying reality.”