Ron Dermer: ‘The lesson of the Holocaust is that the Jewish people need power’

Dermer said that his top two priorities as strategic affairs minister were ensuring that Iran does not obtain a nuclear weapon, and to “expand the circle of peace” between Israel and countries in the Arab world 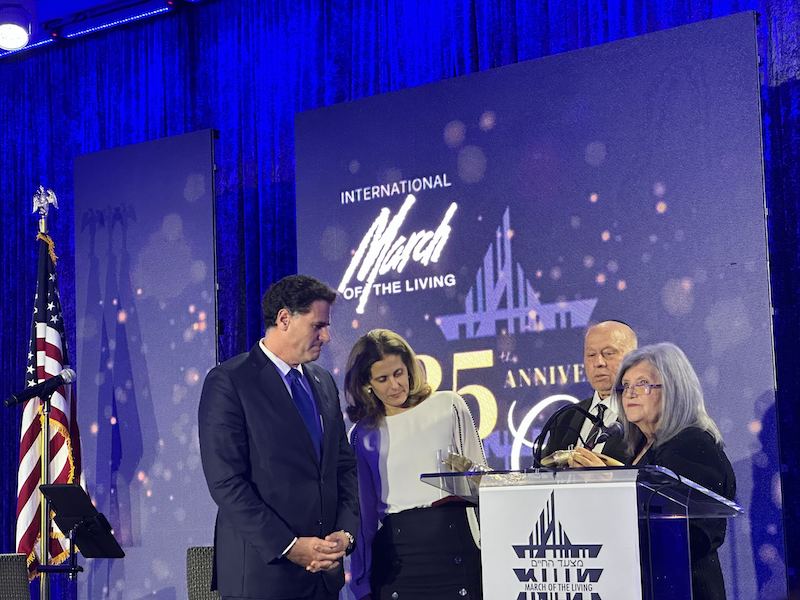 courtesy of an attendee

Ambassador Ron and Rhoda Dermer (at left) are honored at the March of the Living's gala in Miami on Jan. 10, 2023.

At the 35th anniversary gala of the March of the Living, Israeli Minister Ron Dermer said that the lesson of the Holocaust is that “the Jewish people need power.”

Dermer, who previously served as Israel’s ambassador to the United States and now serves as the Israeli minister of strategic affairs, was the main honoree of the gala alongside his wife, Rhoda. The event, which took place at the Beth Torah Benny Rok Campus, a Conservative synagogue in Miami, also included a tribute to Rabbi Yisrael Meir Lau, the former Ashkenazi chief rabbi of Israel.

“Jews are uniquely uncomfortable with the idea of power because there’s a price of power,” he said. “You know what that price is? It’s imperfection. When you are sovereign, you are imperfect. When you are a victim, you can be morally perfect. I would rather be sovereign and imperfect.”

Speaking at the gala, Dermer recounted an instance when, while serving as ambassador, he visited Majdanek, the Nazi death camp, which he called “the most surreal moment that I’ve had… in my entire life.” While outside the camp’s crematorium, he received a secure call from Israel’s and the United States’ national security advisers about an impending American airstrike in Syria and how Israel would be involved in the operation.

“While this call is happening, and while we were talking about who’s going to bomb what when, I had an image of a five-story chimney to my left and a three-story mound of human ash to my right — the ultimate symbol of Jewish powerlessness — and here I was, privileged to be the ambassador of the sovereign Jewish state of Israel, speaking to the most important ally that we have.”

Dermer — who has served for decades as a close adviser to Prime Minister Benjamin Netanyahu — said that his top two priorities as minister were ensuring that Iran does not obtain a nuclear weapon, and to “expand the circle of peace” between Israel and countries in the Arab world that grew through the 2020 Abraham Accords. He also hopes that Israel “will be the most important ally of the United States in the 21st century.”

“Prime Minister Netanyahu is determined to expand it and we hope to work very closely with the Biden administration,” Dermer said. “I think the policy towards Iran is a critical part of expanding that because I think it opens the space for Arab leaders to move into a public alliance with Israel as we face this common enemy together.”