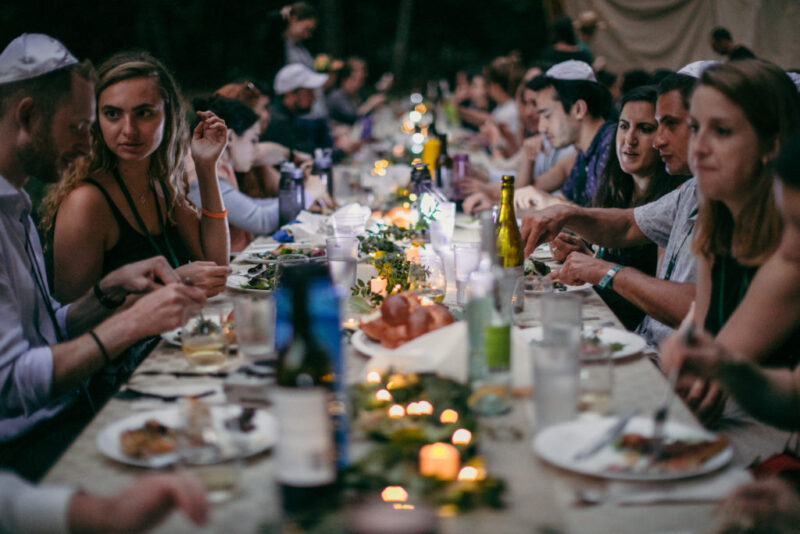 Moishe House participants at a dinner

Moishe House had its origins in 2006, when Santa Barbara, Calif., philanthropist Morris Squire gave a group of Jewish young adults a chance to live together under one roof, hosting post-college Jewish programming for their friends and community. The Moishe House network has grown to include more than 27 countries and reaches upwards of 70,000 young adults around the world every year. Now, its newly launched research and development department is expanding that engagement mission with ‘Powered By – Moishe House Innovation Fund’: a grants initiative for Jews (ages 18-40) worldwide with innovative ideas.

The R&D department is the latest expression of Moishe House’s drive to find and develop new approaches to Jewish meaning. Over the last several years, the organization has expanded beyond the house concept, providing training for community builders through Jewish learning retreats, networking former residents and empowering them to run Moishe House-style programs from their own homes (now Moishe House Without Walls, or MHWOW).

“Innovation in programming is the key to the successful longevity of any nonprofit,” Robert Dorsey, Moishe House’s chief financial and administrative officer, told eJewishPhilanthropy. “We are committed to long-term innovation to widen the tent to more Jewish young adults, and we are anticipating that new programming from innovation will help fuel Moishe House’s growth plans.”

Dorsey, who oversees R&D, added that Powered By is an “initial exploratory launch” to source ideas that Moishe House can “use to power the innovation engine…Ideas generated by this program must be in line with the Moishe House mission and values, and we’re very interested to see the types of new concepts that come from this pilot.”

The R&D department, which launched officially in January, will take risks and invest in new people, also bringing in people who were previously not engaged in Moishe House programs, Hannah Phelps, R&D’s associate director, told eJP. Funding for R&D is allocated from the larger organization’s annual budget.

“So few nonprofit organizations are putting dedicated resources behind R&D for their organizations,” said Brian Barasch, vice president of global marketing and communications at Moishe House. “That this exists at all is so cool, so interesting, so valuable, and for an organization that is at this stage of its lifespan, it’s an incredibly important investment.”

“Less than 5% of nonprofits globally have a dedicated R&D department,” Phelps said. “When people find out that they have one, it creates a lot of buzz, so we get people reaching out to the department, from around the world with ideas for really unique, amazing things.” Some of these things are projects that are already underway but need help to scale up, and others are brand-new ideas, “that they just had last night in a dream,” she said, noting that Moishe House views this as an effort to generate future programs.

The innovation fund is meant to support initiatives promoting peer-led, Jewish community building and illustrating innovation, impact and need: applicants must submit their idea, a projected budget and the timeline; Moishe House will provide selected innovators with funding, mentorship, evaluation and networking opportunities. Accepted grantees will have to attend regular check-in meetings with the R&D team to provide project updates and brainstorm leading up to the project’s launch. After launch, they will need to provide photos and a summary of how the project went, including feedback forms from attendees, users and participants where relevant. They’ll also have to respond to other relevant marketing requests, and include Powered By’s brand on their innovation’s marketing materials.

“This piloting space [will] provide a process around how we innovate, by which we are researching and developing pilots to make small tests and small bets on really big things that are keeping up with the trends of the young adult and Jewish populations around the world,” Phelps said, adding that the goal is to enable the organization to listen and have feedback loops, “to understand what people are needing, as the world around them changes.”

Phelps added that R&D is rethinking Moishe House’s concept of “age and stage” of their target audience, especially in light of the pandemic, in which many young people ended up living at their parents’ homes for an extended period of time, delaying social experiences and financial independence; all of that creates a need to expand the organization’s original age target.

The Powered By grants application link launched less than two days ago, with no range of available funds or funding minimums or maximums indicated; at the time of eJP’s interview, 10 applications had already come in, ranging in asks from $200 to $350,000, research and development specialist Shula Ornstein told eJP. The pool of money is unrestricted intentionally, Phelps added.

“We are open; there’s not a one-size-fits-all type of grant that we’re giving,” Phelps said.

Applicants whose projects pique the interest of the R&D team will be invited for an interview with members of the team about the project, and decisions will be made after that. Selected projects will incubate for six months, during which the team will evaluate the program to see if it fulfills the stated needs; conditional upon evaluations, grantees may receive additional funding.

“As a holistic process with pilots, we try to keep the rules and regulations loose in the beginning and tighten as we go,” Phelps said. “I could see a situation where six months down the line, we do have different tiers that you can apply for with very specific financial amounts. But to start out, we’re going to let the applicants guide the process for us.”

Ornstein added, “We want to know, what are people trying to do? What are people excited to do? And how much do they think that they need for it to give people the space to really think, what is the thing that I want to create?”.

“Ultimately, we don’t want to take over,” Phelps said, “this is their innovation. Even in the name, it’s called ‘powered by,’ we’re hoping to power [it] through support [for] somebody else’s idea,” without dictating where it goes. “We want to be on the sidelines, stepping in to help when needed and ultimately are there to observe and learn from it so we can take those learnings into Moishe House.”

“No idea is too wacky for us,” Phelps added.