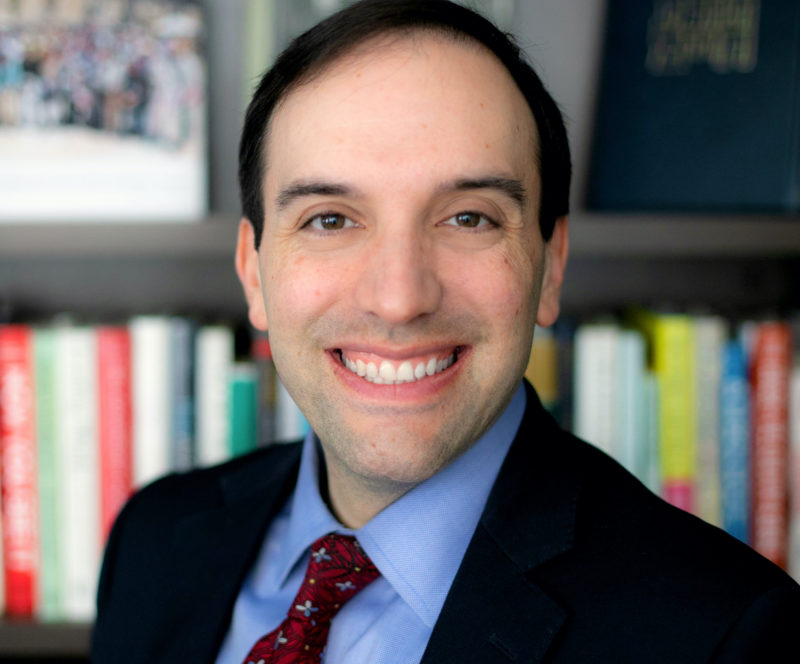 Rabbi Marc Baker has helmed Combined Jewish Philanthropies (CJP), the Boston area’s federation, for three years. His predecessor, Barry Shrage, led CJP for three decades — during which time Baker explained Shrage created the conditions in which CJP and the organizations it serves can experiment with new ways of working together. Baker talked with eJewishPhilanthropy about how he plans to deepen relationships between CJP and its grantees, and how his background as a day school principal has shaped the way he thinks about leadership. Before taking the post at CJP, he was head of school at Gann Academy, a non-denominational Jewish high school in Waltham, Mass. He was one of the first students in the Pardes Institute of Jewish Studies’ Educators Program, where he was also ordained. “I’m trying to create a culture of learning and growth, where people can take risks and be vulnerable,” Baker said. “We’re investing in leaders who can be the creators of their own communities.”

This interview has been condensed and edited.

HC: How would you describe your way of working?

MB: People tell me that I lead like an educator. The best educators are not sages on the stage, transmitting information. They’re empowering the next generation. When I first started, I did a listening tour; I talked to 1,700 people and made 36 different stops. The medium really was a message, especially at a time when institutions — philanthropy, politics — are being critiqued as leading from the top. [At Gann Academy] I had experienced what it was like to be part of the ecosystem that CJP serves, and now I’m on the other side. We’re trying to change that relationship. Our grantees are not just receiving allocations from us. We are in genuine strategic partnership together, building the community that we want. It’s a partnership, it’s not transactional.

Helen Chernikoff: Can you give an example of how you’re working differently with your grantees?

Marc Baker: One good example is our relationship with the Jewish Community Center, which is evolving fast. We’ve always had a long, strong relationship with them, but now it’s not just programmatic, where we ask them to come up with an idea so that we can give them money. Instead, together with them, we’re envisioning what families with children need and want. We engaged IDEO, the design firm. We’re doing this with day schools and other organizations. People make their way through Jewish life in these organizations, but we’re not talking enough together.

HC: Have you changed your processes to reflect this new way of looking at the relationship?

MB: We are making changes to the grant-making process. We are making our applications more transparent and more accessible. Also, the financial investment we make in our grantees is only the beginning of the story. We’re co-creating health metrics so that we can have an open and honest conversation with them about the health of their organizations. This is not about checking boxes so that you can get your allocation. We’re trying to add value for our grantees; we’re hosting workshops, knowledge-sharing, consulting.

HC: How has the pandemic affected your work, and Jewish life in the Boston area?

MB: The pandemic has accelerated collaboration. We’ve been in silos for too long, competing instead of cooperating, operating in a mentality of scarcity instead of abundance. That just does not work in the 21st century, in our networked world. People know that, but it’s hard to break out of it. The pandemic shone a light on this and showed a way out. I’m seeing collaborations that might have taken years to germinate without the pandemic. I’m spending more time in conversation with colleagues about consequential matters.

HC: How did Barry Shrage help lay the groundwork for what you are doing now?

MB: He built an incredibly strong foundation, but was also revolutionary in his own way, so when it was time for him to go, he had already created within his community the conditions that would foster innovation. No one has said to me, ‘You need to be the next Barry Shrage,’ and that’s unique. A lot of people who are hiring are looking for either a magic correction to leadership that has struggled or to replicate the leadership that they loved.

HC: What concerns and worries persist even as you feel you are making progress?

MB: There’s been a renaissance in content, and in virtual ways to engage with Jewish life. But I have the same thing keeping me up at night that’s expressed in Deuteronomy — are we going to pass this on? Do we have the depth of knowledge and sense of confidence that will lead us into the future? Worrying about this is a traditional pastime, I know, but the world is different today. In today’s world of choice and competition and openness, we have to work to keep our culture strong, open, vibrant and deep, and we’re not succeeding. This is why people loved Rabbi Lord Jonathan Sacks so much. They read his books and they said, ‘I never knew that Judaism had something to say of depth and substance.’ The other thing that’s worrying me is polarization. And we don’t want homogenization, but the amount of fear and polarization and toxicity that is seeping into our community from our politics is an existential concern for this decade. And we’re also generating it, in our own ways. I’m worried we will tear ourselves apart.

HC: Do ever worry that the huge numbers of people engaging with Jewish content online are having superficial experiences?

MB: Do I worry that we will not move those folks forward, and not give them the opportunity to deepen their collective Jewish experience? Yes. Do I question the enterprise? No. That’s what a community of belonging does. It creates dynamic opportunities for people to walk through the door. We have a learned dichotomy between depth and breadth, between education and engagement. Maybe tens of thousands of people are being touched by this experience only once or twice. The question is what will it take to build on that, and how as a community do we make it possible to move through a journey of depth, of deepening commitment and responsibility. Right now we have “depth” institutions like day schools that are growing, but then we look at outreach institutions and say it’s not enough — “That’s only a week in Israel.” And then there are people with whom I have to use the word “depth” with caution, because they might think I am being judgmental.

HC: Can you reflect on the role of philanthropy in the Jewish community — what it does well, and how it has evolved?

MB: I will note that we have moved beyond the days when federations simply collect and distribute tzedakah. We need to ensure that every donor, whether they give $18 or $18,000, understand and feel that their gift matters. This means doing better at connecting donors to the impact of our work, and ensuring that we connect them to one another, so they know that they are part of something inspiring, larger than themselves. In a world where people can and will give directly to organizations they care about — which is great! — we also need to educate people about the value of communal giving, and show them that they can make a bigger difference when they choose to be part of the whole.

HC: Could you share a Jewish text you find particularly inspiring or relevant to the work you are doing now, and explain why you picked that one?

MB: There are so many. I am incredibly compelled by Exodus Chapter 19, which describes the encampment of the Israelites at Mount Sinai and the experience of revelation that leads up to the giving of the 10 Commandments. The image of the Israelites at the mountain, standing in community “like one person, with one heart” captures for me what community is all about. A group of people who retain their uniqueness and individuality – each will hear the word of God differently – and who are bonded to one another by their shared relationship with something larger than themselves. They [are] intensely united yet not uniform; transformed from a group of people into a holy community by a shared experience, shared story, shared vision and values. That’s the kind of community we aspire to build.