Hoffman was ordained as a Conservative rabbi. 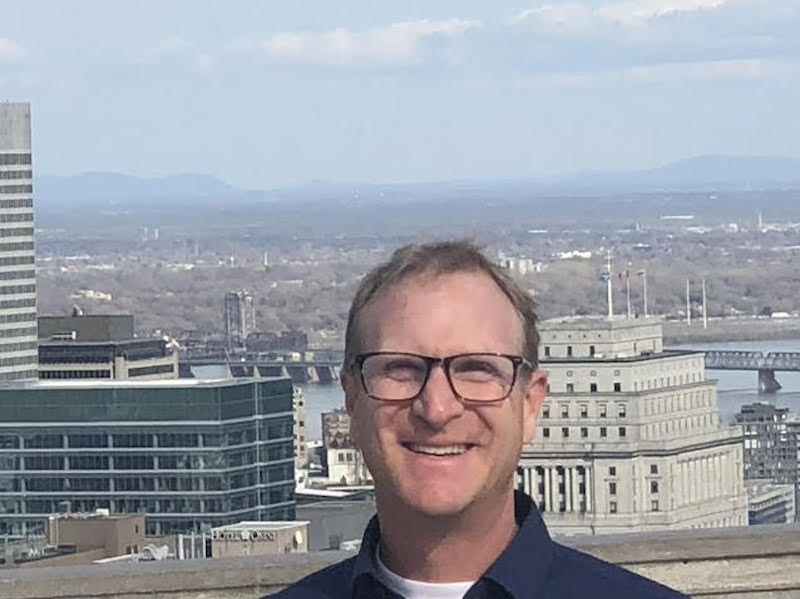 During the pandemic, Rabbi Joshua Hoffman — then a pulpit rabbi at Conservative congregation Valley Beth Shalom in Encino, Calif. — did what many pulpit rabbis did during that time of isolation, turmoil and uncertainty: He took to technology to connect with congregants.

In addition to hosting “Coffee and Kavanah,” a regular class to give people an anchor in Jewish thought, he held Zoom services from his home, while his wife, Rabbi Becky Hoffman, a pulpit rabbi at Reform Temple Ahavat Shalom in Northridge, Calif., held Zoom services for her congregation in another room.

These pandemic pivots, Hoffman told eJewishPhilanthropy, made the perfect case for an embrace of transdenominational Judaism. Despite his Conservative ordination, Hoffman advocates for a Judaism that is not bound by any specific movement, and instead can emphasize accessibility and flexibility in order to meet the changing needs of increasingly diverse Jewish communities. And he is now in a position to create that change as he becomes the next CEO and president of the Academy for Jewish Religion, California (AJRCA).

As people embraced technology for services and classes, it was an extension of the “adapting out of necessity… that the Jewish people have been doing for millennia, and that keeps us vibrant and thriving in every generation,” Hoffman told eJP. “The very spirit of approaching Jewish life with a sense of enthusiasm about what Judaism is going to become, as opposed to preserving what it was, is something that I’ve been practicing in my studies and in the first years of my congregation, and now [I] have the opportunity to lead a seminary that really has situated itself at the center of transformational Judaism, transdenominational Judaism, which is I think, where where we are at as a community at this time.”

Hoffman, who is president of the Board of Rabbis of Southern California, will succeed retiring President Rabbi Mel Gottlieb, who served as AJRCA’s leader from 2008 to 2012 and again from 2016 to this year.

Hoffman hopes to provide a response to the way he feels employment trends such as “The Great Resignation” and “quiet quitting” have created gaps in Jewish communal leadership. “It’s also become a bit of a crisis in the Jewish community… there’s a dearth of leadership and congregational life, and there’s also a hunger, a real starvation for spirituality, especially in the wake of a pandemic,” he said. “The AJRCA takes the very best of tradition, and translates it to a modern voice that will appeal to the modern person,” Hoffman said.

He added that the clergy AJRCA trains are taught not just to serve Jews, but rather anyone who is interested in Judaism “as a thought tradition, as a cultural practice, as a spiritual discipline.”

“Training clergy today requires a deep immersion in the ancient texts and traditions of our people and demands that we carry this wisdom into the world,” Hoffman said. “All this must be conveyed in a language people can understand today. For example, the school will teach about the halakha of Jewish identity in [the Talmud tractate] Kiddushin and then debate how those models can apply today or need to be redefined altogether. The AJRCA creates a safe and open space to explore, challenge, and innovate Jewish wisdom for today’s Jews. Questions of identity are accepted and validated within the Academy, something I believe to be a hallmark of the education we provide.”

The school was originally conceived as a branch of the Academy for Jewish Religion in New York, but is now independent. The faculty members hail from diverse denominations and locations, with ordination or academic degrees from Orthodox institutions such as Yeshiva University, Yeshivat Chovevei Torah and Bar-Ilan University in Israel, Conservative institutions including American Jewish University and the Jewish Theological Seminary and the Reform Hebrew Union College-Jewish Institute of Religion.

AJRCA currently has 73 students from 17 U.S. states, either fully matriculated in degree programs or taking classes, and 180 alumni of its rabbinic and cantorial ordination and master’s degree programs, including 105 rabbis. Alumni have found jobs as clergy, educators and chaplains at a variety of large and small synagogues, organizations and institutions nationwide.

Hoffman, who started on October 1, said he is still discovering the fiscal health of the organization, but estimated the annual budget of the school as less than $5 million per year. The school has a staff of 10, and receives significant support from board members and alumni. Hoffman added that the institution is “poised to solicit significant funding from granting institutions” as well.

Hoffman, who comes to the job with two decades of experience at Conservative Jewish pulpits, received master’s degrees in education and rabbinic studies at what is now American Jewish University in Los Angeles, and his rabbinic ordination came in 2003 from the Ziegler School of Rabbinic Studies on the AJU campus. Transdenominational Judaism was “a part of my formation and thinking,” he said, noting that he chose Ziegler “because I felt the rigorous training was matched with a kindling of the soul.”

“At the time, Ziegler offered the most compelling embrace of modern Judaism at the dawning of the 21st century,” he said. “I was proud to belong to a seminary that unapologetically embraced egalitarianism and subsequently embraced homosexual students. I felt like my seminary training supported the positive virtues of training clergy to meet Jews where they were and prepared me to serve the Jewish people with a spirit of possibility.”

Hoffman said he became a rabbi because he wanted to contribute to the world “with a sense of dignity, intellectual curiosity and pragmatism, that is so vital for our lives and every generation.” His pulpit experience taught him how to navigate various programs within an institution, to “bring the right kinds of resources and the right kind of support to each of those programs without placing one as a favored arm of the institution over another,” he said.

AJRCA’s students “find comfort in embracing modern pluralistic ideas that would not be taught in the classical academies,” Hoffman said, adding that as AJRCA’s graduates are placed in congregations and institutions or serve as independent rabbis, they bring “a taste of tradition, but also a spirit of innovation and creativity for a modern Jewish voice.”

“[They] can enter congregations, hospitals, classrooms and businesses with the mindset that all seekers can access the wisdom of the Jewish tradition,” he said. “Our clergy don’t require subscription to a particular ideological framework other than living more fully with Judaism as a source of inspiration and guide to their lives. Judaism has always been transformative, and a seminary that trains clergy to help people become more authentically themselves is a bold and audacious goal to achieve in every generation.”

He added, “There are a lot of factors that are challenging the classic orientation of the Jewish community, and that includes its institutions. So the fact that we are watching contractions, and partnerships being forged and merging taking place between varieties of communities, I don’t think it’s a bad thing. I actually think it’s not only healthy and important, but it has tremendous potential.”

AJRCA is entering one of those partnerships itself, having taken up residence at Loyola Marymount University, which is Catholic. In January, ARJCA and LMU will start conversations about creating a certification in interfaith relationships, or potentially a doctoral program in interfaith studies, he added.

“Our need to respond to the spiritual longings of American Jewish life and American life in general needed to have a new script,” he said. “The vision is for us to really create joint programming, but also to create communal education that doesn’t teach people that interfaith partnerships are good, but actually addresses crucial issues that affect all of us.”

That partnership is one of his charges in the new position, along with “ensuring that the seminary is sustainable and thriving,” he said, adding that this includes making sure that the curriculum “is not only compliant, and has integrity, but it is also relevant and applicable to a world that needs translation of the Jewish wisdom.”

Hoffman arrives at the helm of ARJCA at a time of collaborations, mergers and changes within large Jewish instituitions. Not far from his new workplace, AJU sold its Bel-Air campus to a non-Jewish educational organization. Hoffman sees the AJU changes as “an acknowledgment that we need to pivot how we function as a community.”

“We need to be serving our people differently,” he said. “It’s not about being in one place anymore. We built structures in the previous generations, and we did it successfully. And I think that the Jews and Jewish life and Americans and American life, especially with the incredible changes that are happening technologically, are everywhere. And in a place of ‘everywhere,’ we need to train clergy to be there with them. That’s the job.”