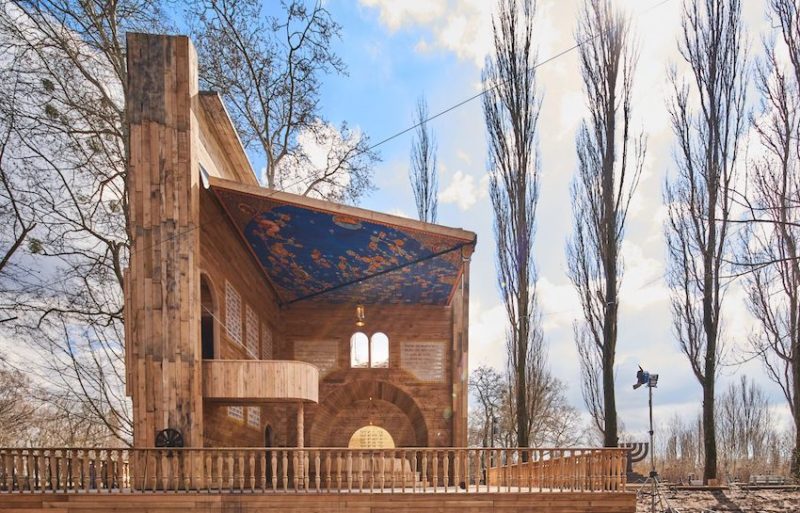 When the architect Manuel Herz was asked to design a prayer space at the site of a two-day massacre by Nazis of 34,000 Jews, he felt honored and determined to disrupt the tradition of the iconic, monolithic Holocaust memorial.

“The crime was so monumental that no monumental architecture can match the crime,” he told eJewishPhilanthropy in a recent interview.

Instead, he built a “book” on the grounds of the Babyn Yar Holocaust Memorial Center (BYHMC) in Ukraine. The wooden structure — which isn’t technically a synagogue according to Jewish law, although it looks and functions as one — opens and closes like a child’s pop-up book, which in this context struck Herz as “radical and profound.”

“It goes to the core of what the synagogue is,” he said. “We come together, we open the book, the Torah, we read it and it opens up a world. A world of stories, morals, love and law.”

Herz’s determination to depart from the canon of memorial architecture complements the mission of the center itself, which is dedicated to telling a part of the Holocaust story that it is still new to many people — that of the “the Holocaust of bullets” — the killing of 2.5 million people in Eastern Europe who weren’t transported to concentration camps, but instead murdered near their homes, said BYHMC’s deputy CEO, Ruslan Kavatsiuk.

“Babyn Yar is the biggest symbol of this story,” Kavatsiuk said. “How do you tell it? There are no artifacts. This is something that has been in the shadows.”

There are 1,200 unmarked Holocaust grave sites in Ukraine alone, Kavatsiuk said, citing the work of Father Patrick Desbois, the scholar and activist who chairs the BYHMC’s academic council.

Local memory of Babyn Yar as the site of a mass grave was further hampered by Soviet efforts to destroy the evidence, such as the decision to fill the ravine with slurry from nearby brick factories. In 1961, a dam failed, and the resulting flood killed at least 145 people. Authorities turned the area into a park the next year, and much of it is still used that way by pleasure seekers who patronize a shooting range and hold cookouts, Kavatsiuk said.

Soviet silence about Babyn Yar’s history wasn’t broken until 1976, when a monument to citizens and prisoners of war — but not Jewish victims specifically — was erected. The first Jewish memorial, a menorah-shaped monument that stands near the new synagogue, was unveiled in 1991.

The idea of a synagogue was born from dialogue between the BYMHC’s artistic director, Ilya Khrzhanovskiy, and its architecture advisory board, Kavatsiuk said.

Rabbi Yaakov Bleich, an American who moved to Kyiv in 1989 to help rebuild the Jewish community and now serves as chief rabbi of Ukraine, had worked with synagogue architects before and had an idea for who might work on this one.

“I said, ‘You want to build a synagogue, let’s call the guy who does the synagogues, he’s one of the most popular synagogue designers in the world,’” Bleich said.

He soon realized, however, that the philanthropists weren’t looking for a typical synagogue. The architecture advisory board recommended Herz.

When Bleich first looked up Herz and his work, he wasn’t sure what to think except that it was “out of the box.”

Herz is Jewish and has designed a synagogue in Mainz, Germany; it’s sharply angled and covered in a charcoal-colored ceramic glaze. He’s also designed a snake-shaped hospital in Senegal, and a cafe in Cologne, Germany, that is covered with vegetation and looks like part of the landscape.

Herz describes his connection to Judaism as one that is highly intellectual.

“I don’t practice actively. I don’t go to the synagogue every Saturday. But I’m very interested in it,” he said.

When conceiving of the Babyn Yar synagogue, however, Herz found himself enthralled with the playfulness of the pop-up book.

One of the structure’s walls is set on a track and can be moved using a manual winch; unfolding it lowers the balcony and causes the roof to pop up.

“Of course, we have to commemorate a past that is so terrible, but we have to be joyful about life, and building a synagogue means the return of life to this space.”

As a student, Herz investigated the relationship between Judaism and space, focusing on the tractate of the Talmud that deals with eruvs, a boundary created with wire or string to expand private space, usually for the purposes of carrying objects during Shabbat.

“The Talmud itself has a spatial quality,” Herz said. “It was almost a replacement of Jerusalem after the destruction of the Second Temple.”

The building evokes the wooden synagogues that were once common across Eastern Europe before they were destroyed during World War II, and that constituted a craft tradition that was rare in European Jewish culture, Herz said.

He honored those synagogues’ traditions of decorating the walls with the texts of prayers, and painting stars and constellations on the ceiling. The ceiling of the new synagogue depicts the sky over Babyn Yar on the night the first massacre started, which Bleich finds intensely meaningful.

“When they were planning it, I wasn’t sure how it would turn out, and it exceeded anybody’s expectations,” Bleich said.

Wood is almost never used in memorial architecture due to the genre’s aspirations of permanence or at least stability, Herz said.

“It will change over time, and I think this is beautiful,” he said. “It will become a silvery gray. We are thinking about installing a curtain to protect the interior from rain and other influences of climate. In a strong snowstorm, we won’t be able to operate it. There will be limits.”

Even though it isn’t technically a synagogue, Bleich and the Jews of Kyiv use it that way.

“We are walking within the raindrops here, we never call it a real synagogue, we call it a symbolic synagogue,” he said.

A minyan, or prayer quorum of 10 men, takes a bus out to the synagogue every day of the week except Friday and Saturday and prays the entire Book of Psalms, Bleich said. There’s also an afternoon service on Sundays.

The rabbi is also planning to hold at least part of the Yom Kippur service there; those who want to participate will make an hour’s walk from Kyiv. It’s important, he said, because it’s the tradition in his congregation that the entire community says Kaddish, the mourner’s prayer on Yom Kippur.

When Bleich first came to Ukraine, he thought this custom was a little strange, until he realized that it probably originated because the first massacre at Babyn Yar happened on Yom Kippur. Everybody in the surviving congregation had lost at least one person that day, which meant they all needed to say the mourner’s prayer, Bleich said. The congregation maintained its custom with his blessing, and when they chant the prayer in the fragile, open book that is Herz’s chapel, it will be an amazing moment, he said.

“We’ll be on the ashes of Babyn Yar, practicing Judaism in a place that was supposed to be the end,” he said.