The Ruderman Family Foundation said it achieved its goal of changing Jewish communal culture. Can others continue the momentum? 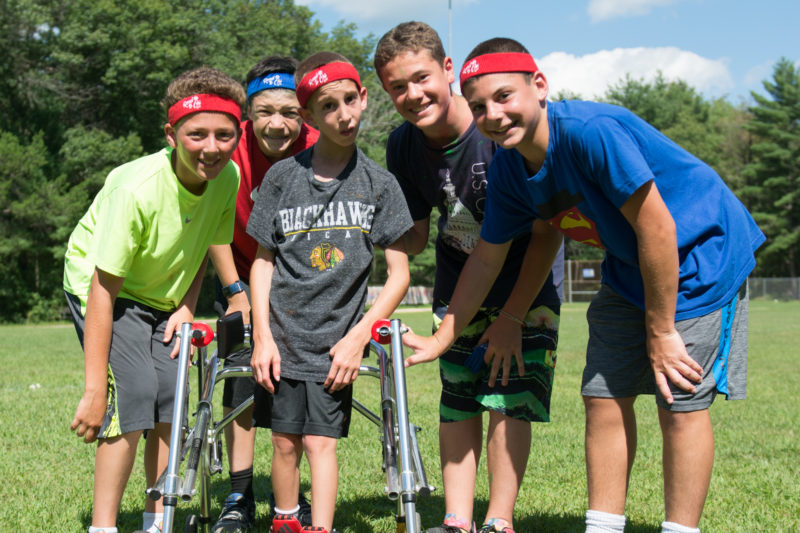 A sleepaway camp bunk is a symbol of Jewish childhood. But for Jewish children with disabilities unable to navigate a bunk’s porches and narrow pathways, they can be a painful reminder of exclusion. B’nai B’rith Camp in Portland, Ore., like many, once struggled to accommodate such campers. Today, it offers three two-story cabins, reached by wheelchair-accessible pathways, that meet the Americans with Disabilities Act’s accessibility requirements. They were built with the help of the Yashar Initiative of the Harry and Jeanette Weinberg Foundation, which funds similar renovations at Jewish camps around the country and is administered by the Foundation for Jewish Camp (FJC).

But before the Yashar Initiative, there was the Ruderman Family Foundation, which helped the FJC pilot a suite of disability-inclusion services at six camps, including the hiring of inclusion coordinators who identified access issues and trained other staff.

In September, after two decades at the forefront of disability inclusion, the Ruderman Family Foundation, which has $178 million in assets according to its most recent tax filing, announced that it had achieved its goals in the field and was in search of another signature issue. Now, advocates, activists, funders and organization professionals are trying to understand the impact of its departure on communal practice and culture. Much of its work has been integrated into the operation of the organizations it supported, or furthered by other funders — like the Weinberg Foundation and the Yashar Initiative. The question is the extent to which the foundation’s work created a shift in thinking in practice. If that shift is shallow, or spotty, programs that haven’t found other support might wither on the vine, leaving people with disabilities and their families feeling alienated and abandoned.

“The Ruderman Family Foundation was an inspirational leader,” Reuben Rotman, CEO of the Network of Jewish Human Services Agencies, told eJewishPhilanthropy. The network connects the local organizations who help get people with disabilities and other populations, such as immigrants, Holocaust survivors and seniors, the support they need in the form of such services as job training, financial assistance and medical care. “Organizations are not going to stop providing services. The disability field is still here,” he said.

Rotman said the Ruderman Family Foundation did help create a change in consciousness around disability in Jewish groups and institutions: Inclusion is no longer an afterthought, and it’s understood that people with disabilities need to be part of the decision-making process about their own lives.

Likewise, the foundation convinced other donors that disability was not a “vertical” but a “cross-cutting” issue, said Jewish Funders Network (JFN) CEO Andres Spokoiny. It helped supporters of day schools, for example, understand that they are also a disability funder — because many students have disabilities.

“They helped the concept of inclusion become more well-entrenched in the Jewish community,” said Dena Libman, chief strategy officer at the Toronto-based Azrieli Foundation, known for its funding of programs for adults with developmental disabilities. “I think that will be their legacy, and that it will outlast their decision, and that it contributed to their decision.”

The Ruderman Family Foundation is maintaining its “Inclusion in Entertainment” portfolio, designed to reshape public perception of disability by promoting more authentic representation in popular culture.

It’s understandable that the foundation would want to change its focus at this point, said Rotman: “No foundation wants to fund something in perpetuity. Philanthropy provides the nonprofit with the risk capital to experiment and refine and pilot. Then the agency figures out, how do we sustain this.”

One of the agencies in the Network of Jewish Human Services Agencies, for example, launched an employment program for young adults with disabilities in 2011 with a $2.5 million Ruderman grant. That program still exists, and is self-sustaining.

Other Ruderman initiatives have ended. At Hillel International, the “Inclusion Ambassadors” program, which began in 2017 with a $750,000 Ruderman grant and trained undergraduates to encourage inclusion on campus, has concluded, Hillel spokesman Matt Berger said. Hillel is still working on the issue, he said, by hosting a session on inclusion at its virtual college fair, providing live captioning for all online programming and holding several programs related to Jewish Disability Advocacy and Inclusion Month (JDAIM), which happens annually in February.

Both Rotman and Shelly Christensen, an inclusion consultant based in Minneapolis who co-founded JDAIM 12 yeares ago, said synagogue life was a priority for the Ruderman Family Foundation. The foundation helped the Union for Reform Judaism (URJ) create a website that contained helpful resources and examples of congregations that were good examples of inclusion. United Synagogue of Conservative Judaism (USCJ) congregations received support to audit and improve their facilities. Neither the URJ or the USCJ were able to respond to questions about whether those programs still exist in some form.

Christensen said she worries about the persistent conviction that inclusion requires external funding. That might mean that the culture shift the Rudermans were trying to achieve is not yet complete, she said.

“We will partner with everybody to offer as much as we can but would still encourage them to put disability inclusion into their budgets, just like they would put anything that’s a recurring expense,” she said.

Of course, some funding is still needed, said both Laszlo Mizrahi and Libman.

“Ruderman’s initiatives were extremely well-funded, well-intended and in many cases well-implemented, but that funding went away,” Mizrahi said. “So we are trying to consolidate.”

RespectAbility, in partnership with the Network of Jewish Human Service Agencies, is applying for a grant from the Jewish Community Response and Impact Fund’s (JCRIF) “Reset Grant” program, which is making grants for big ideas for post-pandemic life. Mizrahi said such a grant would be a way to replace the Ruderman Family Foundation’s leadership and support and to capitalize on technological innovation, such as the widespread adoption of remote synagogue services, fostered by the coronavirus pandemic.

Created in the early days of the pandemic as an emergency fund to protect Jewish institutions, JCRIF is backed by some of the biggest grantmaking organizations in the Jewish community — the Charles and Lynn Schusterman Family Philanthropies, the Jim Joseph Foundation, the Maimonides Fund, The Paul E. Singer Foundation, and the Jack, Joseph, and Morton Mandel Foundation.

RespectAbility is requesting hundreds of thousands of dollars per year over several years to sustain and expand the community’s existing inclusion expertise and infrastructure and to create a centralized disability accommodation fund that will make grants to other Jewish groups.

Rotman said Jewish organizations are stretched very thin right now due to the pandemic, and that more than ever, people with disabilities are one of many vulnerable groups.

“I don’t think there’s going to be backsliding, I think there’s a very strong commitment, but there’s pressure on all spheres here,” he said.