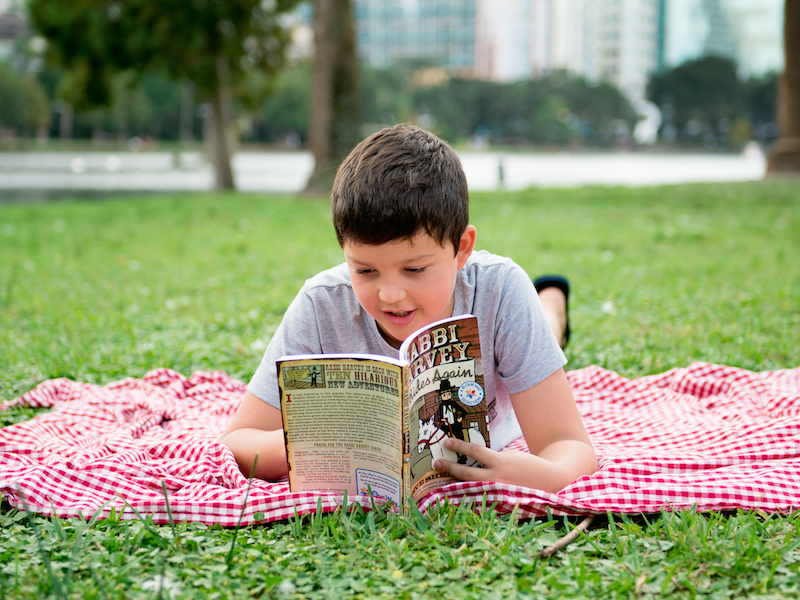 A child reading a graphic novel distributed by PJ Library.

PJ Library, with its monthly shipments of free children’s books, has become a household name for Jewish parents across the country. But there’s one demographic the initiative wants to zero in on expanding: middle schoolers. And it’s doing so not by recruiting more readers, but by finding illustrators and graphic novelists who will draw them in.

The program will launch a new fellowship at the end of next year called the PJ Library Illustrator and Visual Storyteller Fellowship. The cohort of fellows – both established and up-and-coming Jewish illustrators – will meet online and in person, spread over six months, with five-day stays in Israel and Vermont.

“Graphic novels are our middle-grade subscribers’ favorite genre,” Catriella Freedman, the director of PJ Library’s Author Stewardship program, told eJewishPhilanthropy. “If we don’t start building our relationships with illustrators and author-illustrators and creatives in general, we’re going to lose out.”

PJ Library, which has a budget of $36 million, sends out more than 148 distinct titles every year to its more than 670,000 subscribers throughout the world who are raising Jewish families, whether they are affiliated with the Jewish community or not; the nonprofit is principally funded by the Harold Grinspoon Foundation.

The core PJ program targets children ages 6 months to 8 years old, while PJ Our Way is aimed at kids ages 9 to 12, allowing them  to pick their own books from a curated selection. The program’s graphic novel offerings to adolescents include illustrated holiday guides as well as activities and the PJ Library Haggadah. “One of the things that we realized early on is that graphic novels, and different ways of telling a story, are the key to getting more and more kids engaged in our content,” Freedman said.

The fellowship will have a 14-artist cohort that will meet through virtual sessions spread over six months, aimed at building community and inspiring and educating about how to move projects forward, led by illustrators, agents, art directors and researchers. The program is bookended by stays at the National Library of Israel in Jerusalem in November 2023, and the Center for Cartoon Studies in Vermont in June 2024.

The program has received nearly 100 applications so far, ahead of a Dec. 8 deadline. Freedman said that PJ Library cast as wide a net as possible, using vague terminology in its application so applicants could choose their own definition of illustrator. “Bottom line, our aim is to have more illustrators who can illustrate Jewish picture books,” she said. “But we also expand that to include comics-slash-graphic novels. We also expand that to include other ways that people can show creativity that can help us tell stories. So if it’s creativity having to do with puzzles, or creativity around the Haggadah, we’re also looking at that. And maybe it’s someone who has no illustration background themselves, but can describe illustration well enough that they could partner with an illustrator to create a story. We really want to see what kind of applications we get.”

Freedman said she hopes to have an equal number of illustrators and creators from America, Europe and Israel, adding that the organization has also received applications from Nigeria and countries in South America. Fellows will not receive a stipend, but travel and accommodations will be fully covered.

The goal is to have “all of our books start showing more of a reflection of different styles and different ways of conveying Jewish ideas and Jewish stories…In America, it’s very Ashkenormative,” she said, using a term connoting that Jewish culture can often be filtered through an Ashkenazi, Eastern European lens. “But we’ve been told by every author we bring to Israel that the moment they step out of Ben Gurion Airport, they were floored by the variety of Jews walking around” from countries around the world. She added, “There’s nothing like being able to then show them the roots of those communities because so many of them ended up building homes in Israel.”

The idea for the current fellowship was sparked at the 2018 Tent — Jewish Children’s Literature program, a weeklong event put on at the Yiddish Book Center for children’s writers and illustrators, sponsored by PJ Library. James Sturm, the author/illustrator of the award-winning 2001 graphic novel The Golem’s Mighty Swing and the co-founder of the Center for Cartoon Studies, led a workshop at the program. The center, located in White River Junction, Vt., is an institute for studying the creation of comic books,  and offers a Master of Fine Arts degree and one- and two-year certificate programs in “the creation and dissemination of comics, graphic novels and other manifestations of the visual narrative,” according to its website. The center is well-regarded, and graduates have worked at companies such as Disney, Brook/Macmillan, Scholastic, DC Comics, Penguin and Simon & Schuster, winning industry awards. “[PJ Library staff] met James there and were really impressed,” Freedman said. “That’s when we first hatched the plan.”

Since then, the Center for Cartoon Studies and PJ Library have frequently teamed up, including hosting a 2019 in-person retreat and a virtual retreat the following year, where smaller cohorts were given time away from their day-to-day work to focus on their own craft and learn from book agents, scholars and publishers. “This time we are broadening our view and casting a more international net, especially through the partnership with the National Library of Israel,” Freedman said. “We’ve been able to appreciate the incredible illustration coming out of Israel, so we wanted to have some way of really building on that.”

During their time at the National Library of Israel, which is located at The Hebrew University of Jerusalem, fellows will explore different collections, including more than 4 million books and other historical archives, recordings, manuscripts and maps, some dating back to the Middle Ages. The idea is that their time spent learning will inform and inspire them, Shuvi Hoffman, the global Jewish education manager for the National Library of Israel told eJP. “For us, this is the epitome of what we would like to do. Here are people who are coming to draw from the well of knowledge that we hold, and they’re going to pull out the treasures that they find valuable, and they’re going to transform them into something that will resonate with so many others.”

Throughout Jewish history, “illustration was always a big part of transferring text,” Hoffman said, from illustrated Megillot to Haggadot. “The illustration is often a text in and of itself. And it’s a way for certain people to connect, especially for younger kids who might not be proficient readers yet. It really gives them another angle. And another way to access the story is by looking at the illustrations.” She said illustration and comics can help kids learn emotional intelligence and empathy by connecting the emotions on characters’ faces and their mannerisms to how they feel.

The five days spent at the Center for Cartoon Studies will be a residency, with each creator bringing their own style and goals for what they hope to achieve. “Trying to make a great book is like trying to capture lightning in a bottle,” Sturm told eJP. “It’s beyond how talented you are and how thoughtful you are.” It takes time and hard work, and he wants fellows to enjoy the process. “These are people who are accomplished artists and writers,” he added. “I don’t have to create a whole curriculum, but what I want to do is to create enough structure to help them to be as productive [as they can be]… They already have a vision. They already have a focus. They already have a project. My job is to fan those flames and not create impediments or things they have to do or things that aren’t relevant.”

Sturm plans on traveling to Israel with the fellows, getting to know each of the artists so he can support their individual needs during their residency, whether that be by pulling from the center’s library of handmade books and zines, their original art or calling on help from the wealth of cartoonists connected with the school; they include including Jason Lutes, the creator of Berlin, which, through the perspective of everyday people, tells the story of the fall of the Weimar Republic, and Robin Smith, the illustrator on DC Comics’ Nubia: Real One, the coming-of-age story of Wonder Woman’s twin sister.

Sturm sees himself as part of a long line of Jewish comic book creators. “We’re the people of the book,” he said. “So now we’re the people of the comic book… There’s such a history of Jews in comics. It’s hard to imagine the history of American comics without the contributions of Harvey Kurtzman, Will Eisner, [Jack] Kirby, Stan Lee, on and on and on. If it wasn’t for that history, I wouldn’t be having a cartoon school or sitting here talking to you, that’s for sure.”