Partnerships in love and learning

While co-learners may have similar levels of fluency or skill, their styles, pace, and individual personalities color the chavruta experience

Imagine this scene: A young scholar tells his close friend about the previous night with his partner.

“So we were deep in discussion,” recounts the scholar, “and we got stuck. At first I was befuddled by what I heard, and I protested.” 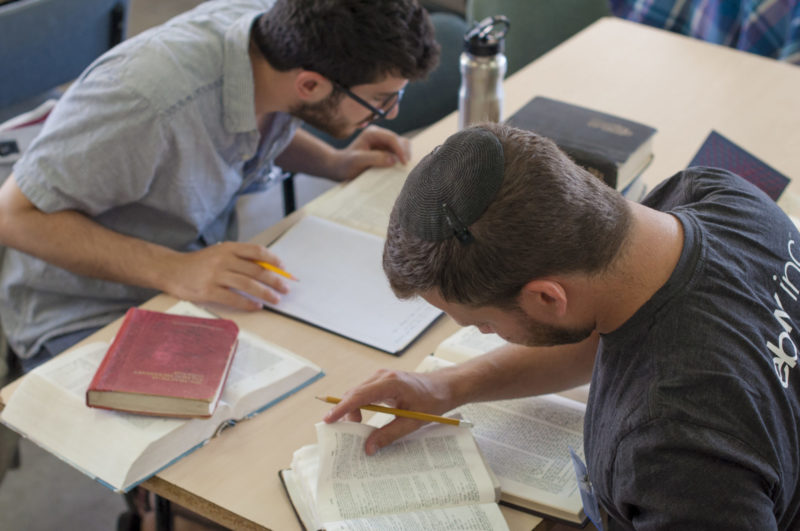 “‘No, I don’t get what you are saying,’” the scholar recounts his partner’s response. “‘Tell me more.’”

The scholar recalls his reaction to his partner: “Wasn’t I clear the first time?”

He tells his friend, “I was confused; nobody ever asks me to talk more! Then I realized the message. What my partner was saying was this: ‘What you’re saying strikes me as absurd, but I want to try to understand where you’re coming from. Try again and say more.’”

“It was a shock!” the bemused scholar admits to his friend. “My partner was actually trying to empathize with me and see the world through my point of view.”

Now imagine another scene, with another young scholar. This one is confiding in her trusted advisor about her partner.

“How do I explain that this just isn’t working out?” she asks her advisor. “I’ve really tried, but I just don’t know if I can keep on going like this…”

Are these conversations about a marriage partnership or a Jewish learning partnership, called a chavruta? Are these young scholars describing communication gaps regarding matters of the heart, or different parsings of textual intricacies? In truth, while these conversations are about their chavruta partners, these students could just as easily have been describing romantic relationships. Indeed, if we take a closer look at these two kinds of partnerships, we can better understand the stumbling blocks in both relationships, and we can devise helpful strategies for resolving common conflicts.

At first glance, while chavruta and romantic partnerships, in particular marriage, both involve commitment of time and effort, the differences between them stand out. Marriage is supposed to be life-long and exclusive. Today, marriage partners are meant to encompass multiple intimate roles, such as a confidant, roommate, friend, lover, co-parent, and financial co-planner, to name but a few. On the other hand, a chavruta occupies a more circumscribed role. In a chavruta, two students partner to grapple with Jewish sacred texts in a beit midrash, or center of learning.

And yet, the two relationships bear salient commonalities. A serious chavruta occupies many hours and primary status in an intensive project of intellectual and religious development. The learning couple reckons with challenging ideas and divergent interpretations. They share bright mornings and dark days and through these many, many hours together forge a rich emotional dynamic. The concepts in the text can conjure up powerful feelings towards each other–feelings of affection and competition, superiority and inferiority, love and anger. As a study pair reaches towards the text, eros, the universal dynamic of longing and connecting, is undeniable.

While co-learners may have similar levels of fluency or skill, their styles, pace, and individual personalities color the chavruta experience. What might be exciting or challenging one day may be frustrating, annoying, or maddening the next. The same can be said for marriage. Like the rabbis who supervise learning, therapists who work with couples observe these individuals as they struggle to date, stay married, and develop chavruta partnerships. Stumbling blocks in one arena may appear again in the other. The person who prefers to learn alone, for instance, might also have trouble in romantic life. The person who more easily bridges differences and finds commonality in dating and marriage succeeds in navigating gaps with a study partner.

And so, educators committed to the whole personhood of their students might do well to note these shared dynamics, for two reasons.

One, they can apply tips and techniques for resolving conflict to both types of relationships. For example, the Talmud (Eruvin 13b), reporting of Beit Hillel’s humility, notes that the members of Beit Hillel would recite the teachings of the opposing school, Beit Shammai, first. Only then would they recite their own rulings.

In his Be’er HaGolah, the 16th century Rabbi Judah Loew, known as the Maharal of Prague, understands that by citing Beit Shammai first, Beit Hillel demonstrated that their goal in the debate was a truer Torah, not personal victory. Beit Hillel’s approach is reminiscent of the relational exercise of sparring couples who reflect back and articulate each other’s viewpoints during arguments. In addition to promoting a sense of being heard, this process can actually help couples digest and hear their partners’ viewpoints. The exercise additionally re-frames disagreement as an opportunity for empathy, rather than as an obstacle course to be overcome. During disagreements, chevrutot and married couples alike would be greatly served by adopting this habit of making a point to articulate their partners’ sides before their own.

Two, by understanding the parallels between chavruta and marriage, educators can help open greater avenues of reflection and self-awareness within their students. These educators can ask their students very direct questions in order to help them understand their relationship preferences. How do you prefer to learn with your chavruta? Do you prefer short spurts broken up by alone time or longer chunks of time all together? Do you prefer to prepare your text solo? Are there times and circumstances in which you feel more in the flow of the chavruta and others when you feel more disaffected? If so, can you identify why that might be? Why do you keep bouncing from chavruta to chavruta, and are you doing the same thing in your dating life?

While marriage is conducted in the home and chavruta in the study hall, counseling techniques around communication, conflict resolution, and the idea of the “good enough partner” can apply to both relationships. Both relationships require shifting from a “me” to “we” mindset, from the basic unit of an individual to a partnership designed to further both individuals’ growth.

Inevitably, partners in marriage and study experience conflict and tedium. Spouses and chavruta partners will wonder, “Did I settle too soon? Can this conflict be resolved? Should I end the relationship?” Educators and therapists alike might give the same advice: Love the one you’re with–and learn with him or her, too.

Dr. Michelle Friedman is a psychiatrist who focuses on the Jewish community. She holds the Steven and Sharon Lieberman Chair in Pastoral Counseling at YCT Rabbinical School, is Associate Professor of Clinical Psychiatry at the Icahn School of Medicine at Mount Sinai in New York and has a private practice in Manhattan. She is the co-author of The Art of Jewish Pastoral Counseling: A Guide for All Faiths published in 2016.