I’ve recently returned from Poland where I met and listened to the stories of Ukrainian refugees. It was a haunting, but inspired experience, one that resonates with its glaring call to action.

I’ve recently returned from Poland where I met and listened to the stories of Ukrainian refugees. It was a haunting but inspired experience, one that resonates with its glaring call to action.

If you follow the news about this brutal war, you believe you are somewhat prepared for the discomfort you’ll feel when hearing their plight. Or you’ll feel immune because this conflict has exceeded our usual attention span and capacity for horrors. 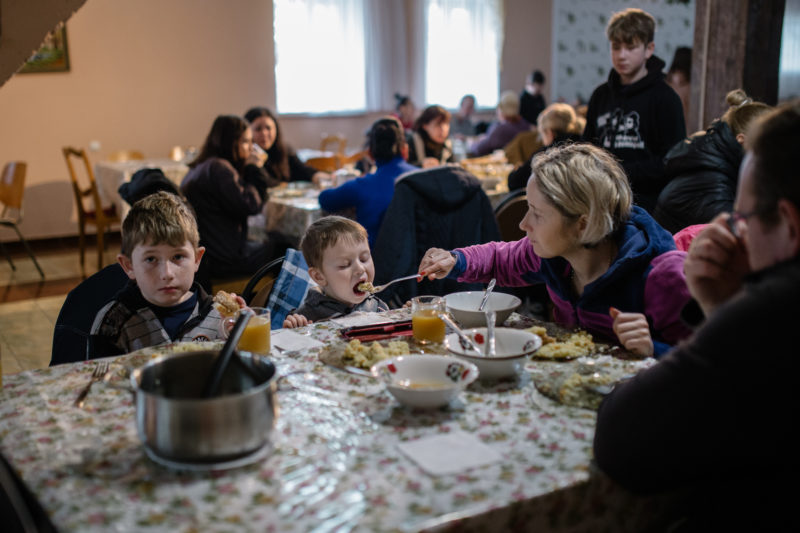 I am fortunate that I have not yet given in to these feelings, or to the helplessness that comes from sitting a world away. After all, I have been part of the journey of the Jews among these refugees for more than three decades. Prior to Feb. 24, I’d been privileged to witness and invest in Ukrainian Jewish community’s miraculous rebirth.

A strong and thriving community, it boasted 200,000 people and institutions and programs as vast and varied as we find here in the States. Among them were close to 40,000 poor Jews – mostly frail and elderly, including Holocaust survivors – needing care in various degrees from social service centers founded and funded by the American Jewish Joint Distribution Committee (JDC). What was remarkable was the vibrant Jewish life they built after the fall of communism and their enthusiastic desire to connect to their faded Jewish identities.

They also possessed an outsized desire to give back, a striking phenomenon in a post-Soviet society where there was no word, in either Ukrainian or Russian, for “volunteer.” It is profound to think that much of the aid work happening inside Ukraine today, and beyond its borders, is enriched and enabled by people brought up in a culture of caring and service inculcated by local Jewish communities.

I met one of these volunteers at a refugee center in Lublin run by JDC, whose board I serve on. I was there with a small group of fellow board members to study our efforts as we work to advocate ongoing needs back home. Her name was Diana and she was busy registering fellow refugees.

We tried to learn more about her, but she smiled politely and told us she could give us no more than fifteen minutes. She simply had too much to do. She was part of an unbreakable chain of care that extended from her hometown in Ukraine to Poland and time was of the essence.

The people she was helping are among millions who’ve fled. Before coming here, they traversed Ukraine in harrowing conditions on journeys lasting three to eight days. Many have left behind husbands, fathers and brothers of conscription age. They’ve crossed the border not knowing if they would ever see their loved ones again.

They are first welcomed by the many temporary structures erected by nonprofit organizations that offer food, physical facilities for respite and medical attention, advice, warmth and even pet food.

Not all have crossed helplessly or come asking for aid and direction. These fortunate people move on from the border to family and friends who will take them in. Despite leaving behind possessions and the trauma they have experienced, they will have a place to call home.

But the others – mostly the elderly, women and children of all ages, many in various states of fatigue, illness, and fear – have nowhere to go. With no one to take them in, many move onto a refugee facility or hotel.

It was there that I saw so many desolate faces, staring off or likely replaying horrible scenes in their minds. There in the noise of uncertainty – people chatting in corners, aid workers offering solace and guidance, and children being children for the first time in months – I met Yelena and Arkady.

Yelena, in her 50s and from Kharkiv, was gaunt, but strong. When the war broke out, she was living with her grandfather and two adult children with disabilities. She remained there, worried about fleeing with people requiring continuous care. After her building was bombed, they moved to the basement. She only left to get food, dodging armed vehicles in the streets.

Their one joy, her grandfather’s beehives offering fresh honey, were destroyed. Yelena was certain death would come soon. So she bravely gathered up her family and drove to the train station. They abandoned the car and futilely tried to take the train to Lviv. It took them days to reach Poland.

Sitting with me, Yelena recognized she was safe now, with food and a feeling of security. But she cannot get her pension – the mail service has been suspended – and her grandfather has grown exceedingly quiet in this ordeal. She wondered aloud what their fate would be.

Nearby was Arkady, who recently fled Kyiv to Chernigov with his wife and teen daughter. He was too old for conscription and driven away by the constant sounds of sirens. But the quiet only lasted so long. Tanks soon rolled into Chernigov. First the lights were cut off, then the heat, and then the electricity. They heated water in a samovar to drink it safely and made a watery soup to keep from starving.

Arkady had growing fears for his family’s safety in a conflict zone, especially his young daughter. So they fled. On the way, they witnessed carnage: dead bodies, bombed out vehicles, and destroyed buildings. In the relative stillness of the refugee center, he reflected on this traumatic flight. As to what lay ahead, he had no idea.

I heard many other such stories – of Katrina, who escaped with her life, but had left behind the papers proving her employment, leaving her unable to find work – and fought back feelings of hopelessness.

Looking around, I noted a silver lining scattered among these shattered lives. In this region of the world – where Jews, including my family, were murdered by the Nazis – they were welcomed today by Jewish communities risen strong from the ashes of history. They are supported by a constellation of Israeli and Jewish groups like JDC, Chabad, The Jewish Agency, IFCJ, Claims Conference, and Jewish federations who are waving the timeless banner of mutual Jewish care.

Many have said we are “having our moment.” But this is what we do, and have steadily done, for more than a century. We take heed of G-d’s promise to bless Abraham on his journey. And we do more than offer blessings to these Jews, whether in Ukraine or in surrounding countries.

We offer comfort, strength, and above all, have pledged to be part of their journey in the days, months, and years ahead. It’s a promise we cannot break and a task we must recommit to now and for the sake of our collective future.

Etta Gross Zimmerman, a veteran Jewish community leader, resides in Florida. She serves on the board of JDC, the Jewish Book Council and the South Palm Beach Jewish Federation.