Sigd means “prostration,” stems from verses in the Biblical books of Ezra and Nehemiah, falls 50 days after Yom Kippur, and is centered on the themes of acceptance of the Torah, connection to God, community gathering and yearning for a return to Jerusalem. 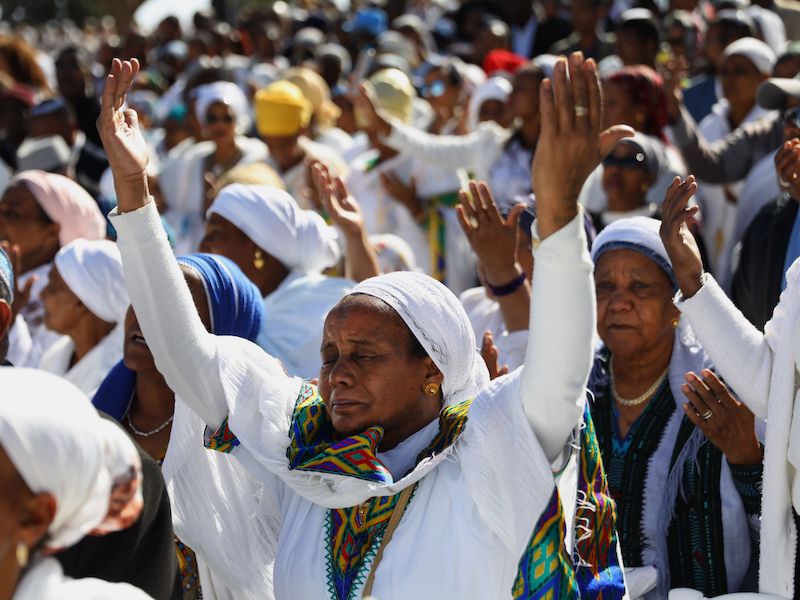 As a child in the village of Ambover, Ethiopia, Michal Avera Samuel remembers spending the day before the holiday watching her mother prepare injera, the Ethiopian flatbread, and dabo, a thick, spiced bread, for the festive meal. Sometimes they would wash their white garments in the river near the village; other years, they would buy or make new clothes for the occasion.

On the morning of the holiday, they would bathe, and adults would fast as the entire community ascended to a designated space to hear a reading from a holy text. Following the ritual, they would sing, dance and partake of the food together.

If this sounds like it has many of the features of a Jewish holiday — albeit one that many Jews may not quite recognize — that’s because it is one. The holiday that Samuel celebrated as a child, and that she has continued to mark as an adult in Israel and now in the United States, begins tonight and is called Sigd.

Ethiopian Jews have observed Sigd for centuries. Now, Samuel and others hope Jews across the globe will begin to celebrate it as well.

“It’s the day that we are celebrating the culture and heritage of the Ethiopian Jews in Israel, in a very positive way,” said Samuel, the former CEO of Fidel, an Ethiopian-Israeli advocacy organization. “Jews globally are so diverse that today, there are so many different assets that different communities have, and this will only bring richness to their community.”

Sigd, which means “prostration,” stems from verses in the biblical books of Ezra and Nehemiah, falls 50 days after Yom Kippur and is centered on the themes of acceptance of the Torah, connection to God, community gathering and yearning for a return to Jerusalem. Traditionally, the day begins with a fast, during which the community ascends a mountain together. There, they pray and listen to a reading of the Torah in Ge’ez, an Ethiopian liturgical language. After the service, they descend to a festive meal replete with singing and dancing.

Ethiopian leaders and their partners who are bringing Sigd to a wider audience are doing something that is at once obvious and radical. On one hand, nothing could be more straightforward than teaching Jews about a Jewish holiday whose traditions and rituals have been kept for time immemorial.

On the other hand, for the vast majority of American Jews, and many Israelis, who don’t know about Sigd or have never celebrated it, the effort to spread its observance has the effect of adding a holiday to a Jewish calendar that appeared fixed. Moreover, it takes place in the Jewish month of Cheshvan, also known as Marcheshvan, which many Jews (erroneously) believe has no holidays.

And unlike holidays such as Israel’s Independence Day or Holocaust Remembrance Day, which were created to mark events still in living memory, Sigd is not a recent addition but rather a holiday with origins in the Bible that has been observed for generations.

“We are celebrating it because it comes from the Torah… which is for all Jewish people,” said Bezawit Abebe, a research fellow at Be’chol Lashon, an organization that raises awareness of Jewish diversity. “The fact that you talk about Ethiopians preserving a Jewish holiday all these years, [which] kept them together while they faced antisemitism in Ethiopia, is a good thing to teach kids so they for sure know these people are Jewish and they kept themselves as Jews.”

Owing to the efforts of Ethiopian-Israeli activists, Israel has recognized Sigd as a national holiday beginning in 2008. Be’chol Lashon has arranged speakers in a dozen schools, synagogues and community centers across the United States to teach Jews about Sigd, though not all of the events will be happening on the holiday itself as it abuts Thanksgiving. The organization, which has a budget of under $1 million and six employees, has made promoting Sigd a focus of its work.

The Jewish Agency for Israel has also created a “Sigd-in-a-Box” digital resource that teaches about the origins and rituals of the holiday, in addition to including recipes for its traditional foods, samples of Ethiopian music and a list of speakers who can discuss the holiday.

But even as they hope more Jews celebrate Sigd, Abebe and others hope observance of the holiday extends beyond an opportunity to eat Ethiopian Jewish cuisine or listen to the community’s music. Rather, they hope the focus stays on the ritual, and feel Jews of all backgrounds should keep its customs and take its messages to heart as they would those of Passover or Purim. Many also see it as a day to celebrate and commemorate the history, culture and sacrifices of Ethiopian Jewry.

“[People] see us as weak, [that] we’ve been saved, Israel brought us — ‘Say thank you,’” said Avishai Mekonen, an Ethiopian Jewish filmmaker who is now making a movie about Ethiopian Jews who fought to bring their community to Israel before the Israeli mass immigration operations of the 1980s and 1990s. “They don’t know the story. They don’t know about the community that survived 2,500 years.”

Ethiopian Jews have continued celebrating Sigd in Israel, gathering annually for the holiday’s rituals at Armon Hanatziv, a south Jerusalem neighborhood with a promenade that overlooks the city. Samuel, who now lives in Ohio, is also teaching Jews in Columbus about the holiday, discussing its history and customs at a synagogue, Sunday school and Jewish day schools.

She has brought traditional festive clothes for the kids to wear and, at one school, cooked traditional food with students, in addition to teaching them about the history of Ethiopian Jews more broadly and their long journey to reach Israel.

At its core, she said, the holiday is about “how [we’re] connecting with God, connecting with the Torah, how it’s meaningful and kept us believing that we would reach Jerusalem. The whole thing really gave us a strong identity to do what we did, to begin walking from Ethiopia to Sudan and then to come to Israel.”

Samuel and other Ethiopian Jews, along with Rabbi Ruth Abusch-Magder, Be’chol Lashon’s education director, want Jews across the country and world to mark Sigd, even if, in many cases, there may not be a local Ethiopian Jewish community that can teach the holiday’s customs. Abusch-Magder, however, encouraged communities that are learning about the holiday to include a Zoom program with Ethiopian Jews.

“The observance of the holiday has to recognize both of those pieces,” Abusch-Magder told eJP, referring to paying tribute to Ethiopian Jewish history and observing Sigd’s rituals. “To just do prayers and not recognize that the prayers come from a place and a community would also be somewhat ridiculous.”

One school that has embraced the holiday is the Epstein School, a Jewish elementary and middle school in the Atlanta area. This year, a bulletin board in the hallway features pictures and information about Sigd observances, and students cooked injera, watched how Ethiopian coffee is brewed, saw a traditional Sigd outfit, heard from Ethiopian Jews about the holiday and learned about the holiday’s connection to the stork, whose northward migration symbolized the return to Jerusalem.

But Idit Bendavid, Epstein’s director of Hebrew and Judaic studies, said that the Sigd curriculum does not make a point of encouraging kids to celebrate the holiday at home.

“The goal for us is to expose the students here to a Jewish holiday that they are not familiar with, and to learn from the holiday and to learn from the traditions of the holiday about another Jewish community, and to add to their own Jewish identity,” Bendavid told eJP. “Being Jewish is not one thing, and as you expose yourself to so many ways of celebrating, you learn more about yourself.”

Those promoting the observance of Sigd understand that it may take a while for broad swaths of Jews to naturally include the holiday on their calendars. But they do hope to witness one change: No one, they say, should claim that there are no Jewish holidays in the current Jewish month.