The movement is increasingly open to interfaith participation in lay leadership 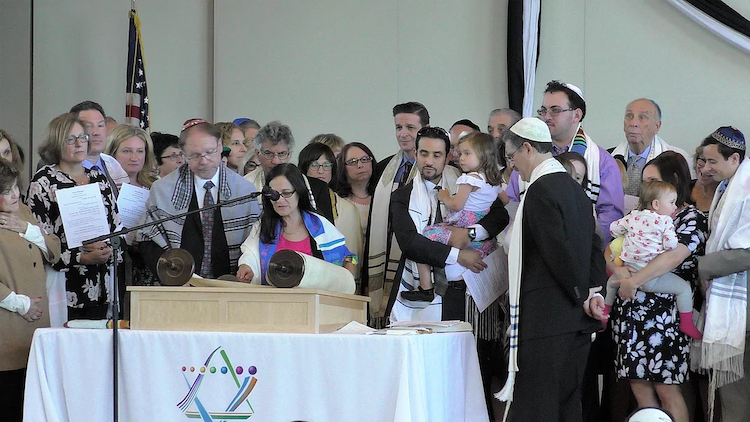 The Reconstructing Judaism movement prides itself on being welcoming and inclusive when it comes to participation by partners from different faiths. Most congregations permit the non-Jewish partner to play a role in congregational governance, and many rabbis in the movement will officiate in some capacity at interfaith weddings.

But many congregations draw a line in the sand when it comes to Jewish ritual, restricting participation by interfaith partners. That’s one key takeaway from a new survey of Reconstructing Judaism synagogues from the Center for Radically Inclusive Judaism (CFRIJ). The results reflect the continued importance of religious distinctions in the culture of Reconstructing Judaism, Rabbi Maurice Harris, the associate director of the movement’s congregational arm, told eJewishPhilanthropy.

“We want Reconstructionist peoplehood to function in a way that’s open, welcoming and warm, but that’s also not going to erase all the differences between who is a member of the people and who is not,” Harris said, adding that many non-Jewish members of Reconstructionist synagogues want their differences to be acknowledged, even as they want to feel fully a part of their community.

Just under half of the congregations surveyed will allow interfaith partners to bless the Torah or light Shabbat candles only in the company of someone who is Jewish, the survey found. Almost 90% count partners from different faith backgrounds as voting members, and 68% permit them to serve as board members.

As many as a third of the congregations take a fully inclusive approach toward interfaith families and partners. “We try to articulate being a community of people drawn to each other and to our style of spiritual journey without doing any traditional Jewish gatekeeping,” wrote one of the respondents.

CFRIJ, which conducted the survey with cooperation from Harris and the movement, defines full inclusion as treating partners from different faith backgrounds as equal to their Jewish partners. Allowing interfaith partners to lead rituals by themselves is a key measure of inclusion, said Edmund Case, CFRIJ founder and conductor of the study.

Jewish religious communities need to be more inclusive lest they make interfaith partners feel like outsiders, which will result in continued declines in membership and affiliation rates, Case said.

“One main reason interfaith couples do not engage Jewishly is that one partner is made to feel that they do not and cannot belong in Jewish communities,” Case said, citing the Pew Research Center’s report “Jewish Americans in 2020,” which found both an intermarriage rate of 72% among non-Orthodox Jews and declines in traditional forms of engagement, such as synagogue attendance.

CFRIJ conducted the survey by email with the cooperation of Reconstructing Judaism in April and May 2021. About half of the movement’s 97 congregations participated. The participating congregations were roughly representative of the movement as a whole in terms of size. The center’s funders include the Debode/Gottesman Family Fund, the Frieze Family Foundation and the Charles and Esther Lee Kimerling Charitable Foundation.

Known until 2018 as the Reconstructionist Rabbinical College and Jewish Reconstructionist Communities, Reconstructing Judaism traces its roots to Rabbi Mordechai Kaplan’s writings in the 1930s, which introduced the metaphor of Judaism as a “civilization” and a “people.” It is known for its “expansive view,” of what it means to be Jewish and to do Jewish things, wrote Rabbi Deborah Waxman, president of the movement when announcing the name change. “We are reclaiming all affirmative expressions of Jewish behavior as generative and full of promise,” she wrote.

The movement’s congregations are increasingly taking down barriers to interfaith participation in governance, but ritual practice will remain more “varied,” Harris said.

The movement doesn’t prescribe any particular set of policies on interfaith partners and their participation, but works with congregations who are facing questions on these issues to undertake a period of study to learn about the relevant Jewish values that come to bear on them.

Jodi Bromberg, the CEO of the interfaith family organization 18Doors, said the survey’s findings are encouraging, and that it’s important to celebrate interfaith partners but not always to treat them the same as their Jewish partners.

“There’s still room for Reconstructionist congregations, and for all Jewish organizations, to improve around inclusivity,” she said. “But in terms of where they are right now, there is a lot of cause for celebration.”