The Jewish Fertility Foundation, which hosts the podcast, hopes to both serve as a guide to Jews facing infertility, and to raise awareness of the issue in a community that's often focused on population numbers. 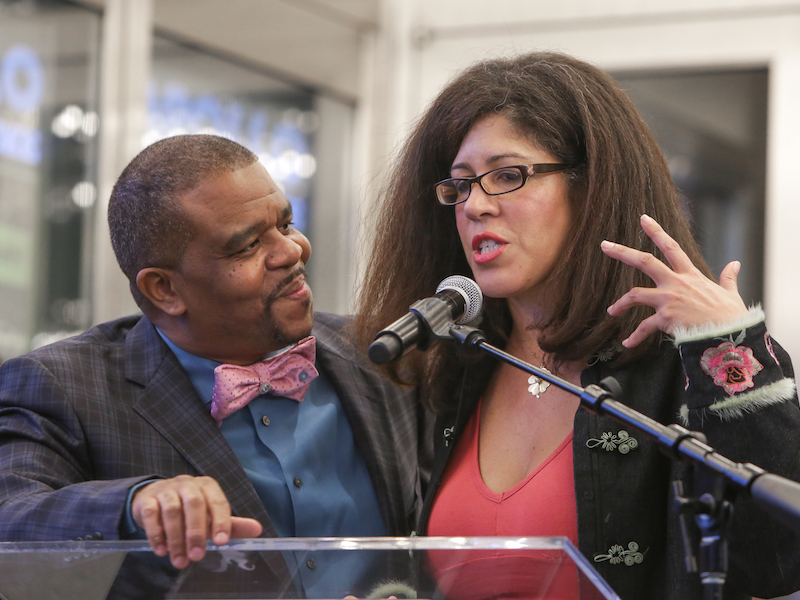 Rain Pryor (right) pictured with her brother in New York City in 2015. Pryor is one of the guests on a new podcast about Jewish infertility.

For decades, Jews across the United States have fixated on Jewish population numbers, closely tracking marriage and fertility rates.

But for a segment of Jews, “the journey to create those families can be fraught,” says Elana Frank, founder and CEO of The Jewish Fertility Foundation. The foundation, which launched in Atlanta in 2015 and has since expanded to other cities, has two goals: to guide Jews experiencing infertility through the often tortuous process on the road to having a child, and to raise awareness of infertility in the Jewish community.

“Because family is so central to Jewish life, many women (and men) experience tremendous stress and pressure when the path to parenthood is not so simple,” Frank told eJewishPhilanthropy. “Infertility remains taboo, something that, in many communities, is not talked about or openly acknowledged. When people dealing with infertility experience the Jewish community as steeped in pressure and cloaked in shame, the community can become something to avoid, a point of stress and anxiety, and not a refuge or place for connection and support.”

According to the Centers for Disease Control and Prevention, about 12% of women ages 15-44 in the United States have difficulty getting pregnant or carrying a pregnancy to term.The rate is higher among Jewish women, JFF claims, as many may place a greater focus on their education or career, marry later or face genetic issues.

JFF provides financial assistance to intended parents for procedures like in-vitro fertilization (IVF), which costs an average of around $20,000 for one cycle and is often not covered by insurance. JFF has given a total of $915,000 in grants, loans, and discounts to intended parents. Parents also receive a genetic screening through partner JScreen.

Now, JFF is doubling down on raising awareness of infertility in the Jewish community. It already provides emotional support to intended parents as well as education for families and Jewish professionals. Recently, the group launched “Fruitful & Multiplying,” a podcast that aims to broaden access to stories about fertility in the Jewish community and remove the stigma surrounding it. The name comes from the Torah commandment to have children.

The podcast features doctors, attorneys, rabbis, therapists and professionals in the field, as well as people around the world who are on their own fertility journeys. The first episode featured actress and comedian Rain Pryor, the daughter of comedian Richard Pryor, discussing her struggles with infertility and how women, particularly Black women, are often overlooked in fertility healthcare.

“We are not listened to as much with our bodies and concerns,” Pryor said on the podcast. “I demanded that I have testing done.”

Another episode featured matchmaker Elizabeth Savetsky, who has nearly 200,000 followers on Instagram and who discussed how infertility has impacted her mental health. Savetsky said she experienced miscarriages, including ectopic pregnancies, and that revealing her fertility journey to her social media following made her feel less alone.

“One in four pregnancies end in loss, statistically,” Savetsky said on the podcast. “Why do I feel alone? Why is [infertility] so stigmatized? It was twofold, really: It was me wanting to connect to other people who had gone through similar things and also like, wait a minute — I am showing so much of my life, promoting so much positivity and inspiration. I want people to know that it’s not all roses.”

On another episode, Chavie Bruk, a Chabad emissary in Montana who adopted five children, discussed navigating the adoption process.

“It’s harsh, It’s heartbreaking, it’s painful, it’s exhausting, it’s not some easy thing to accomplish,” Bruk said. “There are so many misconceptions and stereotypes of what the adoption process looks like and what it entails… That’s why I like to talk about it. I want people to understand and know what it’s all about.”