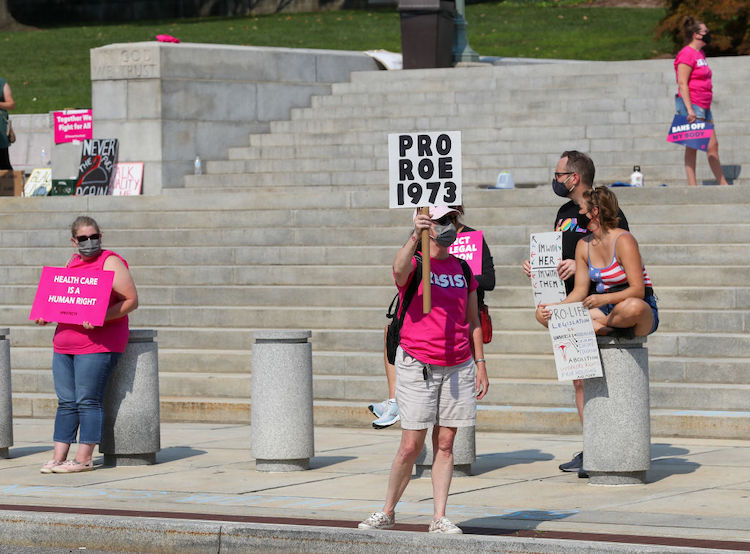 HARRISBURG, UNITED STATES - 2021/09/12: Protesters hold placards in front of the Pennsylvania State Capitol during the Rally for Reproductive Rights. The rally was organized after the United States Supreme Court refused to block a Texas law prohibiting almost all abortions. (Photo by Paul Weaver/SOPA Images/LightRocket via Getty Images)

The National Council of Jewish Women (NCJW) is mounting a new education and advocacy campaign, 73Forward, in response to diminishing access to abortion and the possibility that it might again become illegal, NCJW CEO Sheila Katz told eJewishPhilanthropy. The campaign’s name is a reference to Roe v. Wade, the 1973 Supreme Court decision that struck down Texas laws criminalizing abortion on the grounds that they violated her right to privacy. The landmark 7-2 ruling established that a woman’s right to have an abortion was protected by the Constitution.

“The last time the Jewish community really had a conversation about abortion was back in the ’70s,” Katz said, noting that Jewish organizations including NCJW helped lead the movement that culminated in the Roe v. Wade ruling. “That conversation hasn’t really changed, so education is a key part of this campaign.”

Founded in 1893 as a volunteer organization, NCJW’s original mission was helping Jewish immigrants with education, employment and healthcare. Today, its 200,000 members focus on advocacy and education as well as community service. Its top three priorities are abortion and contraception access, voting rights and judicial nominations. It had a budget of about $3 million in 2020, according to its most recent tax filing.

This abortion rights campaign will be different, Katz said. NCJW plans to play more of a supporting role to organizations serving low-income women of color whose access to abortion is being most sharply restricted by new state laws and Supreme Court rulings.

“That’s the shift in the fight in the Jewish community as a whole,” she said.

The campaign aims to help educate both the Jewish community and the general public about medical abortion, by which a woman takes pills to terminate a pregnancy. NCJW also plans to lobby the U.S. Food and Drug Administration (FDA) to loosen restrictions on medical abortion, which NCJW says aren’t medically necessary.

“There’s been a lot of medical advances since we last talked about abortion as a community,” Katz said. “Medical abortion could change the game.”

The two other legacy Jewish women’s groups, Hadassah and Jewish Women International (JWI), are allied with NCJW on reproductive issues. JWI links its support for abortion rights to a broader stance on female bodily autonomy and economic empowerment. “Whether it’s a partner who’s responsible for getting you pregnant by hiding your birth control pills or the state legislature or the Supreme Court restricting access to abortion — these are abuses of power,” said Deborah Rosenbloom, JWI’s chief program officer.

Both NCJW and Hadassah lobbied for the passage of the Women’s Health Protection Act, which would protect abortion access, in the House of Representatives, and are now working on building support for the bill in the Senate.

NCJW will launch the campaign, which it has been working on for eight months, on Oct. 27 with a dedicated website. It was originally timed to help raise awareness around a pending Supreme Court case, Dobbs v. Jackson Women’s Health Center, for which the court will hear oral arguments on Dec. 1. In that case, state officials in Mississippi are asking the court to overturn Roe v. Wade and to sustain a law that largely bans abortions after 15 weeks of pregnancy.

The brief also argues that there is no religious consensus on the question of when life begins, supporting that claim with exhibits consisting of primary texts and scholarship from various religions, such as “A Shin Buddhist Stance on Abortion,” “Ethical Issues in Reproductive Medicine: A Mormon Perspective” and a Talmud commentary in which the medieval scholar Rashi explains that an unborn baby is not considered a soul.

The Jewish Coalition for Religious Liberty filed a brief in support of the state of Mississippi, arguing that a constitutional right to abortion infringes on the liberty of those who have religious objections to it. A group including the Jewish Pro-Life Foundation also wrote in support of Mississippi on the grounds that Jewish law permits abortion only to save the life of the mother “in extremely rare circumstances.”

The Supreme Court’s Aug. 31 ruling that refused to block a Texas law that bans most abortions after six weeks caught NCJW and its allies by surprise, but its significance is more narrow in that it hinged on procedural questions and did not address the constitutionality of the law.

In the weeks leading up to the court’s hearing of Dobbs v. Jackson Women’s Health Center, NCJW plans to harness their Rabbis for Repro program, which advocates for abortion access.

“We want to reclaim the narrative of abortion and religion; the majority of people of faith are supportive of access to abortion and see it as essential healthcare,” Katz said.

NCJW will use social media and other online channels to disseminate conversational prompts that will encourage the Jewish community to talk about abortion in the hope of destigmatizing it.

“We are seeing the willingness of people to start sharing their stories,” Katz said.