The group met entirely outside, a concession to ongoing concerns about COVID-19, but the Los Angeles weather cooperated. 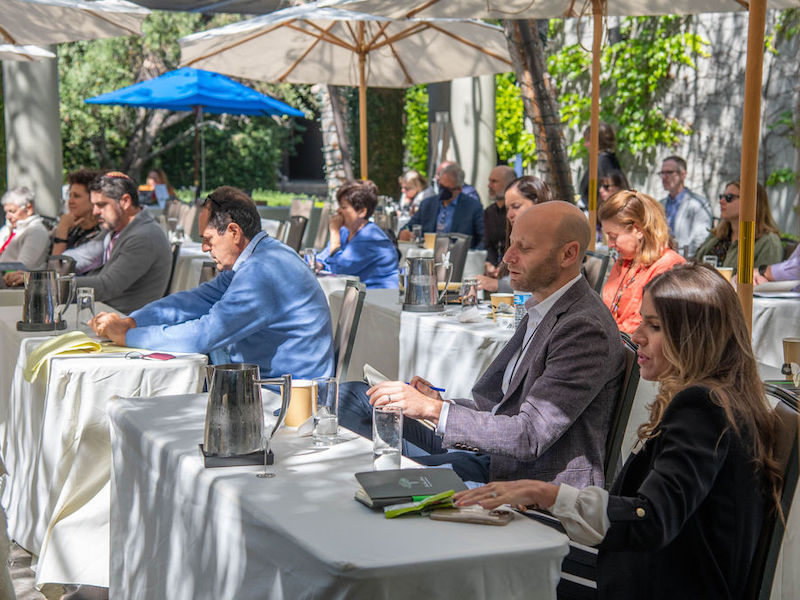 On arrival at the Luxe Sunset Boulevard Hotel earlier this week, there was joyful reunion in the form of cautious hugs, elbow bumps and smiles from mostly maskless participants in the Jewish Funders Network (JFN) West conference, as some 50 philanthropists and fundraising professionals from the western United States gathered for nearly two days of discussion and writing.

“You’re here today because you want to learn, you want to be even more strategic and impactful in your giving, and you want to do it in community with other funders,” JFN West Director Tzivia Schwartz Getzug said in introductory remarks at the event.

The group met entirely outside, a concession to ongoing concerns about COVID-19, but the Los Angeles weather cooperated — making the experience feel “idyllic,” according to one participant. The setting was speckled with umbrellas for those who wished for shade and open patches for those seeking California sunshine. During meal and workshop times, small tables encouraged participants—who ranged in age from their 20s to their 60s— to move around and converse with different groups of people. Instead of flowers on the tables, the organizers provided seeded paper as both decoration and something that could be taken home and planted after the conference. Throughout, participants took notes in a journal provided by the organizers inscribed with the conference’s theme — “Be the Story.”

The regional conference —the second of its kind and the first one to be held entirely in person, following a virtual gathering last year — was not meant to duplicate the efforts of March’s JFN Conference in West Palm Beach, Fla., or next year’s international conference, to be held relatively nearby next March in Phoenix, Ariz, which brings together philanthropists, private foundations and Jewish professionals from across the world.

This more intimate gathering was envisioned as an opportunity for peers to meet and hone the skills needed to create effective stories, explained Schwartz Getzug, who spoke with eJewishPhilanthropy after the conference concluded on Tuesday afternoon.

“Not everybody has the same kind of life experience,” Schwartz Getzug told eJP. “People understood that putting themselves in the story as they communicate about their work, their passion, their philanthropy, makes others so much more interested and open to whatever it is that they’re talking about.”

The concept of story got a workout over the course of the conference; the first day launched with a screening of “Blewish,” a short film about biracial Jewish identity from filmmaker Ezra Edmond.

During his time at the podium, Edmond said, “We are all born and eventually we all pass away and those pieces that happened in the middle are what make all of us completely unique, and make our stories our stories.”

After a keynote address and workshop from Andy Goodman of the Goodman Center, which teaches communications and marketing professionals how to reach more people impactfullyimpactfully, participants practiced storytelling with each other in smaller groups, with some presenting to all the attendees.

“There were some really good lessons in how to bump your communication skills up in a way that could be really powerful, whether you’re talking to donors, potential collaborators, or whether you’re just having a one-on-one conversation with a colleague,”  Schwartz Getzug told eJP. “Hearing a personal story in the mix of the professional work just really brings the issues home in a much more powerful way.”

Because networking was a primary goal of the conference, the schedule allotted a lot of unstructured time, especially during mealtimes, to provide a chance for the about 50 participants — who hailed from San Diego, Denver, Seattle and other Mountain and West Coast locations in addition to Los Angeles— to schmooze. Participants really appreciated the change to “tap into the experiences and insights of other Jewish funders,” Naomi Strongin, vice president of the Center for Designed Philanthropy at the Jewish Community Foundation of Los Angeles, told eJP.

“Since we are in geographic alignment, we were able to have more in-depth conversations about our work and connect in a more personal way,” said Strongin, also a member of the JFN West Advisory Committee. “It afforded a great opportunity to get to know colleagues better, share and learn from our respective experiences, successes and challenges.”.

At the conference’s sessions, participants learned about Harvard University lecturer Marshall Ganz’s method of storytelling, which, in his words, involves communicating through the “story of self, the story of us, and the story of now.”  They had the opportunity to write stories, workshop them in small groups and then present them to the larger group.

“I believe in history and the Jewish people,” Grossman said at the session, adding that  she started JSP “to make sure that others would have the same wonderful chance that I had in my life because I’ve been supported by incredibly generous donors.”

She added, “the only way to have a cultural renaissance is to support artists.”