People of the book

Unlike other religious groups, older Jews are about as likely as younger Jews to say their families expected them to go to college.

Education has long been the top priority in the Jewish community, so much so that the Shulchan Aruch, a 16th-century code of Jewish law, famously requires that each Jewish community pay the salary of a teacher to work with its children to learn to read. In contemporary Jewish life in the United States, this priority strongly emerges once again when it comes to continuing one’s education beyond high school to a college or university. American Jews overwhelmingly report in numbers notably higher than other faiths and belief systems that it is generally expected that one will attend an institution of higher education. Without a doubt, Jews today exemplify the idea that they are a “people of the book.”

New data reveals that education still maintains a preeminent position in Jewish culture today. A new national survey of over 5,000 Americans conducted by the Survey Center on American Life demonstrates this centrality and asks a simple question: Growing up in your family, was it generally expected that you would go on to college? 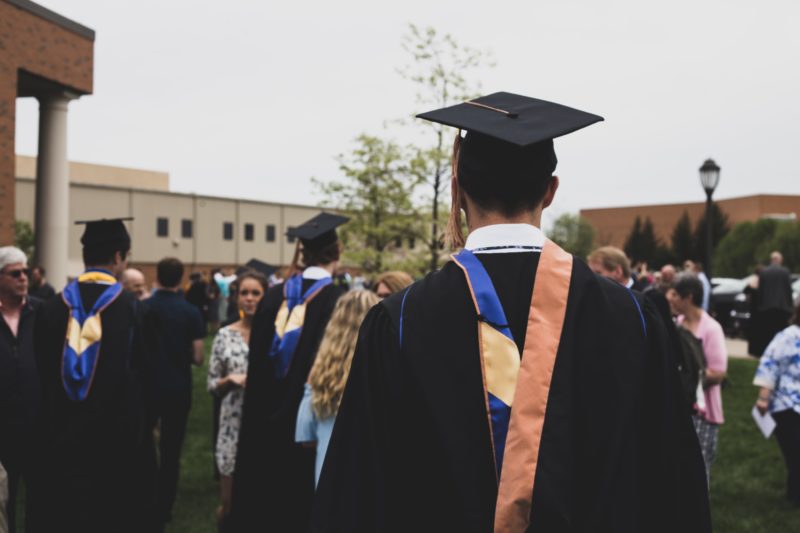 The results show that while the plurality of Americans say their families expected them to go to college, many families simply did not talk about post-high school education at all. Forty-three percent of respondents stated that they were expected to go on to a four-year college. At the same time, nearly a third (30%) reported that their families simply did not spend time talking about educational expectations whatsoever.

As for the Jewish community, a full 80% were expected to pursue a degree at a four-year school. Not only is this figure twice the national average, but it is also far larger than those of other faiths: Less than half of (41%) of Protestants and Catholics (42%) report having faced a similar expectation, despite the latter having a huge network of colleges and universities. Among religiously unaffiliated identifiers, the numbers are higher: Sixty-four percent of atheists report expectations about going to a college or university and 58% of agnostics believe the same. Members of the Mormon/Latter-Day Saints Church, a group that has shown a significant focus on higher education through Brigham Young University, are notably lower at just 57%.

Turning to age and generation, it is worth noting that there is a trend of younger Americans having been more encouraged to attend college than older Americans were. The data demonstrate that a little more than just over a quarter (27%) of those in the Silent generation had families that expected them to attend college. Boomers’ families had a similar post-secondary outlook, with 35% saying their families expected them to attend a four-year college. For those in Gen X, the number increased to 43% and for Millennials jumped to 48%. Among Gen Z, the number has climbed to 60%.

This general trend of younger generations being increasingly steered towards higher education is evident across religious groups as well. In the case of Protestants, 58% of Millennials or Gen Zers report college was expected of them, compared to notably lower levels of Boomers (34% and Silents (22%). Catholics and Mormons show almost identical generational trends as well.

Unlike other religious groups, older Jews are about as likely as younger Jews to say their families expected them to go to college. Eighty-two percent of Boomers note that college was expected of them. A high number (74%) also emerged for Gen Xers, Millennials, and Gen Zers but a bit lower as there are alternatives like coding academic and religious training. But this shows that collegiate education was and remains a critical value and expectation among those in the Jewish community.

Without a doubt, Jews in America deeply value college, and Jewish families talk about its importance at levels much higher than the national norm. None of this is to suggest that the American Jewish community is smarter than any other group, or that Jews today prize education more than other people. But there is an undeniable expectation to continue one’s formal education well after high school in the Jewish community and this deep interest in education may contribute to the high levels of Jewish political engagement and liberalism that are evident today. Whatever the spillover effects, the words of Rabbi Jonathan Sacks are evident here: Jews are “people whose passion [is] education, whose citadels [are] schools, and whose heroes [are] teachers.”

As the greater Jewish community and its many philanthropies think about where to invest, these data make it clear that education remains a core value for American Jews and it is therefore critical that focus is still strongly paid to collegiate life. From the BDS movement to a rise in antisemitism in general to rampant self-censorship where Jewish students are regularly afraid to share their views and even ask questions, supporting and backstopping these students now would go a long way. The Jewish community embraces higher education like no other group in the nation and we can better support – through Hillels, Chabad, the Academic Engagement Network, and a whole host of other institution – the large number of Jewish college and university students who regularly feel threatened, silenced and disconnected from their schools and campus communities.

Samuel J. Abrams is a professor of politics at Sarah Lawrence College and a nonresident senior fellow at the American Enterprise Institute