‘It wasn’t a show, an effort, with Sheldon. He respected every individual,’ said David Brog, CEO of the Maccabee Task Force 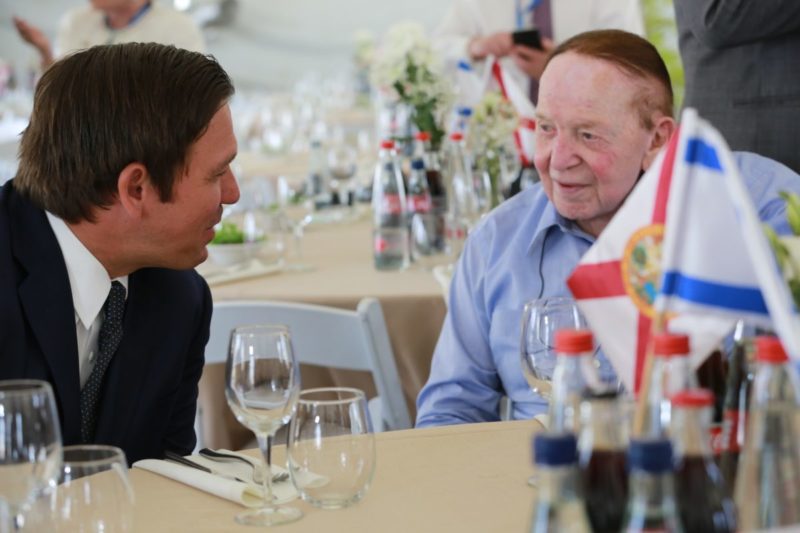 For David Brog, it was the way Sheldon Adelson treated the little guy, especially waiters and waitresses who served him. For Izzy Tapoohi, it was the smile on his face when he interacted with Birthright Israel participants. And for Andrew Borans, it was the three hours Adelson spent at the end of a long banquet chatting with individual members of the Jewish fraternity Alpha Epsilon Pi.

As many in the Israel advocacy community mourn the death this week of billionaire casino mogul Sheldon Adelson, beneficiaries of his philanthropy remembered not just his generosity, but his sense of personal decency.

“He treated waiters serving him dinner the same way he treated senators who called him on the phone,” recalled Brog, who said he was deeply shaken by Adelson’s death on Monday at age 87.

“It wasn’t a show, an effort, with Sheldon. He respected every individual,” continued Brog, who has been CEO of the Maccabee Task Force since Adelson hired him away from Christians United for Israel in 2015 to run the campus organization that battles anti-Israel activism and antisemitism. “After a long day and a long dinner and long speeches, people would line up to talk to him and he showed each one respect. I’ve worked for a senator and other important people, and he showed more kindness than I’ve ever seen. I think because he came from nothing.”

Adelson was one of four children of a Boston taxi driver. “He didn’t put on airs, he didn’t claim to be a righteous tzadik,” said Brog. “There was a fundamental decency I’ve not seen in other important people I’ve been around.”

At the event held to launch the Maccabee Task Force, Adelson said something that has stayed with him, said Brog. “He said that his legacy is not going to be the casinos he built or money he earned, but what he did for Israel and the Jewish people. ‘This work is my legacy,’ he said. It wasn’t just talk.”

Tapoohi, president and CEO of the Birthright Israel Foundation, which has perhaps benefited from more funding from the Adelsons than any other Jewish nonprofit, traveled widely with the casino mogul, and said he never saw him happier than during their last trip to Israel together, about two years ago. Birthright Israel, which offers young Jewish adults a free 10-day trip to Israel, is widely considered the community’s most successful Jewish identity-building program.

Thousands of young Jewish adults were at a Birthright mega-event at the Sultan’s Pool in Jerusalem, and the Adelsons sat in the front row. As Birthright participants came up to him to thank him, Tapoohi said, Adelson’s “face lit up. He really lapped up every moment. While he was so generously giving, he was even happier about the effect it had on these young adults. His face is always in my mind, how happy and content he was.”

Adelson and his Israeli-born wife, Dr. Miriam Adelson, have donated $500 million to Birthright since they started contributing in late 2006, Tapoohi said. They have given the program an average of $25-$30 million a year, a significant portion of Birthright’s total annual budget of $160 million. The Adelsons gave Birthright Israel $34 million directly in 2018, alongside donations to Jewish federations and other groups that send young adults on Israel trips. That same year, the Adelson Family Foundation gave Boston’s Jewish Federation, Combined Jewish Philanthropies, $4 million. That money was directed for Birthright trips and supporting a K-12 school in Haifa, said Daniel Seligson, CJP’s senior director of strategic communications.

In 2013, Adelson joined AEPi at a banquet celebrating student leaders and the Jewish fraternity’s centennial. “There were 700 AEPi students in attendance,” recalled Borans, CEO of the Alpha Epsilon Pi Foundation. “The event ended at 10:30 p.m., but for the next three hours Sheldon stayed in the room speaking with every undergraduate who wanted to ask about his life, quiz him on Israeli history or take a selfie picture together. It was a wonderful night I will always remember. I sat in awe watching Sheldon never flinch.” The Adelson Family Foundation gave AEPi $370,000 in 2018.

That year, the latest for which its tax filing is available, the Adelson Family Foundation gave away a total of nearly $116 million, in addition to direct personal giving, and does not include their direct contributions to political campaigns. Susie Gelman, chair of the board of the Israel Policy Forum, told The New York Timesthat she didn’t expect Dr. Adelson’s giving would change following her husband’s death.

Heads of organizations that have benefited from the Adelson Family Foundation’s largesse said that it was premature for them to speak to what might happen to future support, but noted that Dr. Adelson was in lockstep with her husband when it came to philanthropy. Brog, of the Maccabee Task Force, told JI that any philanthropic decision was “a full partnership between the two of them. I have every reason to believe that their charitable giving will not change significantly going forward.”

The Adelson Family Foundation gave enormous sums to nonprofits based both in the U.S. and Israel, with many of its donations closely tracking Adelson’s conservative politics.

Friends of the Israel Defense Forces (FIDF) received nearly $11 million that year, and the Israeli American Council in 2018 received more than $12 million. In 2018, the American Society of Yad Vashem received over $5 million from the Adelsons. The Middle East Media and Research Institute (MEMRI), which tracks what is said about Jews and Israel in Arabic-language media, was given $1 million, and Ir David Foundation, also known as El-Ad, which excavates the ruins of Jerusalem’s ancient City of David, received more than $3 million.

The Adelson Foundation in 2018 gave American Friends of Magen David Adom (Israel’s Red Cross) more than $4 million, and the World Values Network, established by Rabbi Shmuley Boteach, was given $500,000. Several Lubavitch organizations were each given tens of thousands of dollars, and cultural organizations from the Nevada Ballet Theater to the Las Vegas Young Artists Orchestra and the Zamir Chorale received between $10,000 and $100,000.

Sheldon and Miriam were personal friends of Mort Klein, the president of the Zionist Organization of America, and top donors to the conservative advocacy agency for the past 15 or 20 years, with gifts totaling $10-$20 million, Klein told JI.

They met when Klein was on the executive committee of AIPAC, the pro-Israel lobby, and each year at its convention introduced, in his own words, “an avalanche” of resolutions. (Adelson broke with AIPAC late in the George W. Bush administration over its peace push.) “Sheldon, I didn’t know him then, would always get up and support my resolutions. He was a short, somewhat heavy-set guy with reddish hair. Afterwards one year, he said to me, ‘Who the hell are you? Whenever you get up and talk, I really think it’s me talking.’ I said well, ‘Who the hell are you?’” Klein recalled. Adelson responded, “‘You don’t know who I am? I’m Sheldon Adelson, founder of the Las Vegas Sands casino.’ He was rich but not well- known then. Then we became friendly.”

“I talked to him regularly to discuss Israel and the Middle East. He loved Israel like no one I’ve ever met,” Klein said. Adelson’s commitment to Israel was born of his own father never having been able to make the trip, recalled Klein.

Klein and his wife, Rita, were guests of the Adelsons for dinner “dozens of times,” he said, at their homes in Las Vegas, Los Angeles and Israel. One year, while they were dining in the Adelsons’ Israel penthouse, someone knocked on the door, Klein recalled, and in walked Benjamin Netanyahu.

Klein fondly recalls Adelson’s 80th birthday party, held at his Marina Bay Sands casino in Singapore. Adelson flew about 150 people to the resort first class and put them up for five days, said Klein. Each party- goer was given a card saying they were there as Adelson’s guest. The card allowed them to eat in any of the resort’s restaurants free of charge. They were given tickets to local museums, zoos, and shows, and at the actual birthday celebration, the celebrated crooner Tony Bennett performed.

Klein once asked Adelson if his penchant for philanthropy began when he became wealthy. Adelson said no, the ZOA head recalled. “He said, ‘My father used to put money in the pushke [charity box] every day. He was a cab driver [in Boston], and we were poor. I asked him why he was putting coins in every day, and he said ‘it’s for poor people.’ He said no matter how poor we are, there are people even poorer and I want you to always give charity.’”