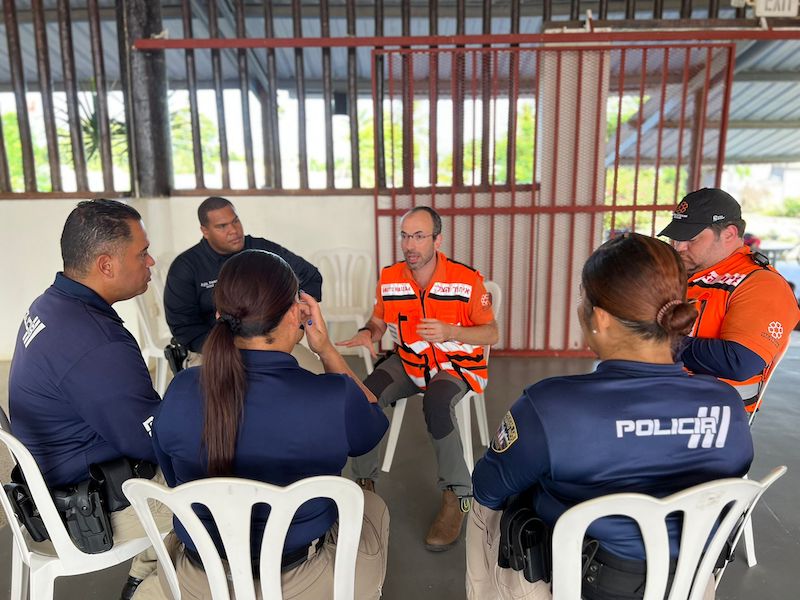 Just before Rosh Hashana began, psychotrauma therapist Gaby Hilkowitz Rurka left her home in Israel, headed for Puerto Rico as part of a United Hatzalah team providing an emergency response to Hurricane Fiona. One day when it started to pour, she recalls a young boy approached her and said,  “This is exactly what makes me so scared and nervous. This reminds me of the hurricane,” Hilkowitz Rurka recalled to eJewishPhilanthropy.

“[We tell them], ‘It’s so normal to feel like this. Obviously, you went through a very difficult situation and your brain is still hyper-aroused,’” Hilkowitz Rurka said. “So, we normalize it for them, so they get to start understanding what’s happening with their brains and their bodies.”

When disaster response teams arrived in Puerto Rico and the west coast of Florida in September and October, shortly after Fiona and Hurricane Ian, respectively, made landfall, they were focused on meeting immediate needs — extricating those who were trapped and providing food, shelter and medical care. But during the little more than a week when its teams were in each location, Hatzalah, a nonprofit headquartered in Jerusalem, also attended to what it says is an important, if sometimes neglected, aspect of disaster relief: providing tools for people to cope mentally and emotionally in the aftermath of trauma.

“Everyone always treats the physically wounded, but no one ever deals with the mentally wounded,” Gavy Friedson, mission commander for United Hatzalah in both Puerto Rico and Florida, told eJP.  “All of a sudden, [if] someone sees someone get hit by a bus, they’ll run to the person who was hit, but they’ll forget about the six people who saw the person hit by the bus.”

Local Jewish community leaders have continued relief efforts after the disaster response organizations have left, and are also caring for their neighbors’ mental health. Rabbi Yitzchok Minkowicz, director of Chabad Lubavitch of Southwest Florida in Fort Myers, which took a direct hit from Ian, told eJP that nearly a month after the Category 4 hurricane made landfall in Florida, he is focused on providing his community with moral support. Going door-to-door in his neighborhood, he said the devastation is tangible.

“Everything from the house – books, floors, clothing, everything’s outside,” said Minkowicz. “And I go into people’s houses to give them strength. Any neighbor, Jew or non-Jew, I go into their houses, and I say, ‘Hey, what can I do for you?’ And they say, ‘Listen, Rabbi, just come and check and make sure I’m sane tomorrow.’ It’s very rough.”

After an initial assessment, the focus of Hatzalah’s psychotrauma professionals is on stabilizing people, Hilkowitz Rurka explained. “You want to help them feel more grounded and feel like they belong and feel like they aren’t helpless. They can do something. You want to help them with a racing heart, with anxious thoughts, basically making them feel more strong and more able to do things.”

The Hatzalah team uses various models to do this, including a method called the Six C’s created by trauma expert Moshe Farchi, president of the Israel-based International Center for Functional Resilience. Farchi’s method is focused on quickly shifting a person from a passive state to being able to actively function right after a traumatic event.

Hatzalah attended to victims’ physical as well as mental health. Working with the local Chabad in San Juan, the United Hatzalah team visited locations throughout the island, providing water, food, medicine and humanitarian aid, particularly on Puerto Rico’s  western side, where the impacts were most severe, Friedson told eJP.

“Some villages were completely flooded out. A lot of people lost their homes,” said Friedson. “[There was] a lot of devastation in those areas in Puerto Rico – no power, no water, anything you’d expect from the aftermath of a hurricane. So, it was very hard to see in some of those areas.”

When Hurricane Ian hit, United Hatzalah dispatched a team to Florida, where it provided similar assistance, working with local first responders who recognized the group from their work in Surfside last year after the collapse of the Champlain Towers South apartment building.

Part of the work involved encouraging those who felt they had nowhere to go  to evacuate, said Friedson. The team spent days in Hertz Arena, a shelter in a sports stadium near Fort Myers. When they left after a week, he said 130 bodies had been recovered from the area.

In total, Hatzalah estimates that it aided 500 people in Puerto Rico and more than 1,000 in Florida, spending $35,000 on each mission out of its budget of approximately $35 million. It sent 12 people to Florida and had a team of 13 in Puerto Rico.

Minkowicz’s Chabad, like Hatzalah, is aiming to tend to people’s material as well as emotional needs, and is still providing daily hot meals for the community, working out of the one local building that was not damaged. It is also now starting work on repairing its flooded preschool, ritual bath and guest houses, in order to accommodate people who need a place to stay.

He is grateful for the $77,000 Chabad has raised so far – 42% of its goal. “I always tell people we have one donor, and that’s God. God is sending the money on his clock,” said Minkowicz.

The timing of the hurricane also increased the need for supplies, coming in the middle of the Jewish High Holiday season. Minkowicz said community members have stepped up:  A bank executive drove for two hours with her kids to donate toys for the preschool, and Rabbi Josh Broide of Boca Raton Synagogue also provided catered meals to Fort Myers Chabad for more than 100 people on the first and last nights of Sukkot.

Locals in Puerto Rico were  also supportive of the Hatzalah team, Friedson said. For example, Luis Vásquez, the security guard at the hotel where they were staying and a paramedic, volunteered to assist the psychotrauma unit with translation and any medical needs that arose.

“He’s like Israel’s newest ambassador right now in Puerto Rico,” said Friedson. “He loves United Hatzalah. He has the Israeli flag of the United Hatzalah, and he put it up in his room in his house and he brings it everywhere he goes. It’s just amazing to see what we’ve managed to do as a country many miles away, the impact we have on the ground, just helping people on a mental level and a physical level.”

Because Hatzalah’s team was on the ground for only a short time, it tried to leave people with tools they could use themselves. This included teaching children and their parents games and breathing techniques to calm their nervous systems. For example, the aid workers taught victims to close their mouths around a straw and breathe in for a count of four, hold the breath for a count of four and exhale for a count of six. The longer exhalation helps calm the nervous system.

“It really helps at the time, they can actually feel better within a minute or two of doing it,” said Hilkowitz Rurka. “We teach them that in the night or in a week or two, they might still feel anxious, and they might still feel those butterflies in their stomach. And this is one of the techniques that they can [use to] help calm themselves down.”

Another part of United Hatzalah’s work is helping first responders to deal with their own high stress levels as well as learn additional techniques to support the people they are helping.

Friedson was touched by the community’s expressions of gratitude for Hatzalah’s work. In the town of Anesco, in Puerto Rico, people sang songs of appreciation in the church, and a family that had lost its home gave two of the psychotrauma specialists each an avocado.

“They wanted to feel like they were doing something for us,” said Friedson. “They were able to give us just a simple avocado, which is everything to them. It’s their food. It symbolizes so much hope and resilience. And by generously giving it to our team, it was really just a powerful moment for all of us to experience.”