A bike by any other name

Fifteen friends of a 19-year-old terror victim donated an ambucycle in his memory, naming it with a twist they knew he’d love. 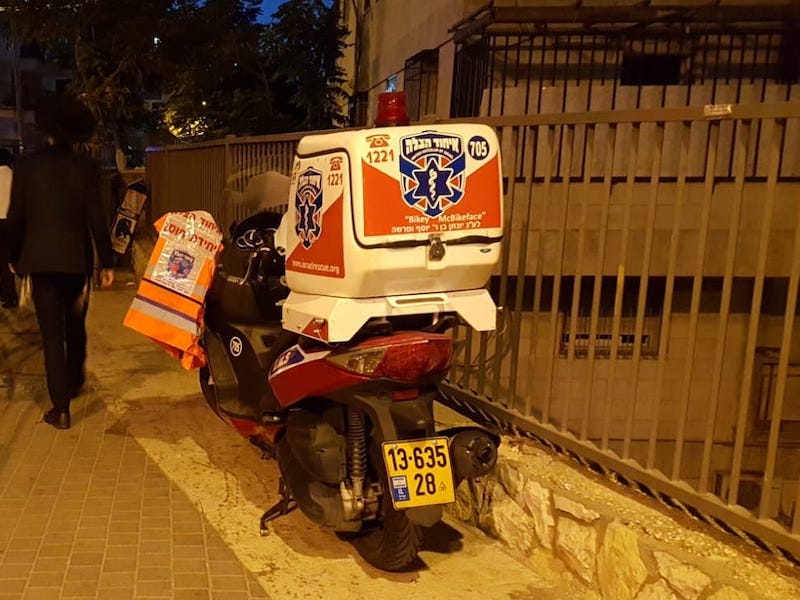 Bikey McBikeface on the streets of Jerusalem.

The Israeli emergency response organization United Hatzalah has a fleet of more than 1,000 ambucycles, or mopeds outfitted with emergency lifesaving equipment. Most of the ambucycles, which the organization uses to respond to some 2,000 calls per day, were donated in honor of people or milestone events.

But only one of those ambucycles has an official name: Bikey McBikeface.

Bikey McBikeface took to the road in 2017, the donation organized by a group of friends in honor of Yoni Jesner, a Scottish 19-year-old who was killed in a terror attack in Tel Aviv in 2002.

Jesner had dreamed of being a doctor, and was always running around helping people, so it seemed fitting to donate an ambucycle in his name, said Binyamin Casper. Casper studied with Jesner at Yeshivat Har Etzion in the West Bank settlement of Alon Shvut before he was killed. After Casper immigrated to Israel in 2016, he started thinking about different ways to honor his friend’s memory in Israel.

The organization was founded in 1989 by Eli Beer. When Beer was a 16-year-old volunteer EMT, his ambulance was stuck in traffic while trying to reach a 7-year-old choking victim. The boy died, and Beer resolved to find a way to cut down on response times during emergencies. Hatzalah pioneered a peer-to-peer GPS dispatch system, which notifies the closest volunteers to an emergency.

Donating an ambucycle to United Hatzalah costs $36,000. People can also donate other vehicles, including an off-road 4×4 ambutractor for $92,000, or a mobile ICU ambulance for $225,000. Fifteen friends joined together to raise $18,000, and that amount was matched by Casper’s wife’s aunt and uncle, Phil and Malki Rosen.

“Just before we were ready to dedicate it, the U.K. had run this funny naming rights thing for this scientific boat,” Casper said.

In 2016, the U.K.’s Natural Environment Research Council (NERC) invited the public to name a $300 million polar research ship, and out of more than 30,000 suggestions, voters on the internet chose Boaty McBoatface by an overwhelming landslide. Despite Boaty McBoatface capturing almost a third of the vote, NERC was less than enthused with the choice, and ended up naming the ship “Sir David Attenborough,” after the celebrated British nature presenter. British officials, however, did deign to name an onboard submarine with the winning submission.

“Danny Steel [another friend from yeshiva] was inspired by [the] Boaty McBoatface story, and he said, ‘Can you ask Hatzalah if we can give the bike an actual name?’” Casper said. “Yoni was a huge jokester, one of the funniest guys I knew… This was a great shtick very much up Yoni’s alley.” United Hatzalah was more flexible than the British NERC, and the name was approved.

“Usually the donors choose the dedication, and they dedicate it in honor of family members, loved ones, people who passed, bar mitzvahs or weddings,” explained Raphael Poch, an EMT volunteer and the international media spokesperson for United Hatzalah. “Many bikes have interesting dedications, and we have numerous bikes [dedicated] in honor of terror victims,” said Poch. But he’s unaware of another ambucycle that has both a dedication and an official name. “This was a very unique instance where the bike was given a name,” he said.

Poch said some of the volunteers name their bikes on an individual basis. He personally names his bikes after Shakespearean heroines. His ambucycles have been named Portia, from “The Merchant of Venice”; Desdemona, from “Othello”; and his current steed, Miranda, from “The Tempest.” But it’s a personal moniker and, unlike Bikey McBikeface, is not emblazoned on the bike itself.

United Hatzalah has around 6,500 volunteers and around 300 employees. Its 2021 budget was $27 million, though the 2022 budget nearly doubled, driven by the nonprofit raising $20 million for its emergency work in and around Ukraine. The organization, which is not connected to individual Hatzalah organizations in the U.S. and other countries, responds to around 675,000 calls per year, about 25% of which are considered life-threatening. It is funded from private donations and foundations, and works alongside — and occasionally in competition with — Magen David Adom, Israel’s national emergency medical and ambulance service.

Poch said the dedications on each emergency vehicle are an important link between the donors and United Hatzalah’s work. “I know the donors [of my ambucycle] personally, they live two streets down from my house, and when I go on a mission and I save someone’s life I’ll tell them the story of what happened,” he said. “I’ve told them I named the bike, so I say, ‘Miranda and I saved a life today.’”

Donors can get updates even if they don’t live in the same neighborhood as the volunteers. United Hatzalah sends individualized messages to vehicle donors three or four times a year, describing what kind of events their specific ambucycle or ambulance has responded to over the past few months. There is a team of 10 full-time employees at Hatzalah who collect the information about each donated vehicle and compile the donor updates, including a short biography of the person who is driving the vehicle, said Poch.

“The donors feel very connected, they really like getting reports, and feel like they’re a partner in this,” he said. “We want them to feel the effects of what they’ve donated, and know what it’s been used for.” There’s another reason for the massive communications undertaking: Poch said it greatly increases repeat donations.

The first driver of Bikey McBikeface was Avi Press, a longtime dispatcher at United Hatzalah’s Jerusalem headquarters. In 2017, he rode Bikey McBikeface to an emergency at Damascus Gate and saved the life of a young Arab woman having a seizure during an diabetic episode. In November, Michael Cassar, McBikeface’s latest driver, rode the ambucycle to respond to the double bombings at bus stops at the entrance to Jerusalem.

“Marsha [Gladstone, Jesner’s mother] loves getting the updates from Hatzalah,” said Casper. “It’s a beautiful thing for her, every few months to get that boost of, ‘Hey, the ambucycle named for your son is doing incredible things.’”

Bikey McBikeface’s journey may soon be coming to an end. United Hatzalah ambucycles generally last for about five years, up to a maximum of seven years, before they are retired, and Bikey McBikeface is already six years old. The bike recently came to prominence when a Jerusalem resident posted a photo of the bike on Facebook with a humorous imagined conversation about the origins of its name.

“Yoni is very much in all of the hearts of people who knew him,” said Casper. “His legacy lives on through the Yoni Jesner Foundation, and every year there’s a gathering at his grave on Erev Sukkot,” the day before the Jewish fall festival. Having Jesner’s ambucycle capture attention on Facebook, nearly six years after it took to the streets, made Casper and all of the other donors smile and feel a connection to Jesner that they usually only experience when they gather together on the anniversary of his death.

“The ambucycle encapsulated a lot of Yoni in one shot: his spirit, his desire to help people in life, and his humor, which I think brought out a lot of creativity and humor and generosity from others,” Casper said.

If people see the Bikey McBikeface name on a lifesaving device and smile, then it’s like a double mitzvah, Casper added.

“I look at it as, his soul got a reawakening at this time, to make us stop our usual day and think about the person no longer with us, and their values and what they stood for,” said Casper. “We got this added jolt of energy of Yoni’s sprit and legacy.”