Isolation. Anxiety. Blurred lines between the professional and the personal. Fear of being stigmatized or labeled by those around us. Most, if not all, of us have grappled with these demons since the pandemic took hold nearly a year ago. For many, these struggles represent uncharted waters. But those of us living with disabilities have wondered, even whispered the thesis to each other: Has living with a disability somehow uniquely prepared us to lead in this moment? 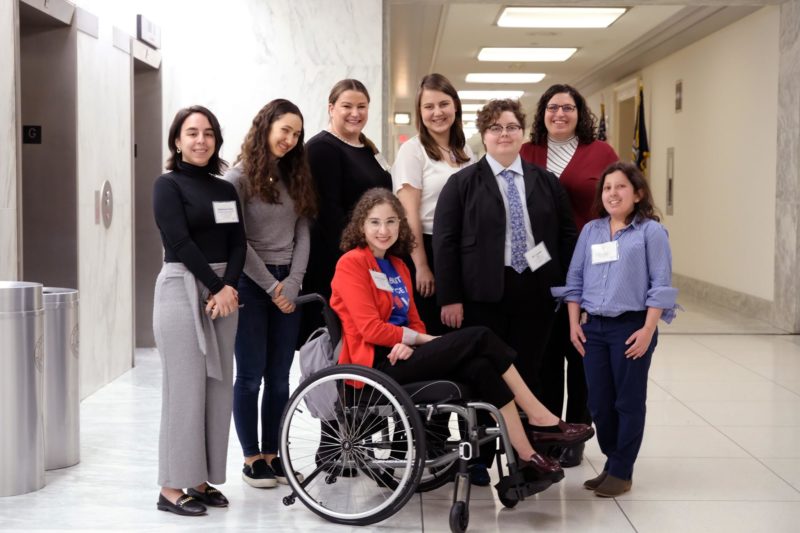 For Ilya, that preparation began in 2017, when he was working as the Executive Director at the Hillel at Baruch College. An Iraq war veteran, he also served as the campus’ veterans faculty advisor. Publicly, he served his community with pride. Privately, he struggled with physical and mental pain that he would soon learn were part of his post-traumatic stress disorder (PTSD). When another veteran on campus died by suicide, it was a wake-up call. Ilya began to seek help for himself, but he also decided then and there that he wanted to be a part of destigmatizing disability in his community.

For Hannah, inclusivity in Jewish spaces has been top of mind since childhood, when a hearing disability quickly showed which experiences and communities were truly welcoming. That feeling of belonging – whether at synagogue or at summer camp – led to a career in the Hillel movement, first at the Ohio State University Hillel and then at Hillel International, with a focus on engagement, inclusion, and wellness

Enter Hillel International’s fledgling Employee Resource Groups, which emerged in 2018 as an outgrowth of several years’ worth of disability inclusion work at the international level. From campus-specific training and internships, to movement-wide commitments around universal design, inclusivity as a core value had been picking up steam. Eventually, a peer-led focus group of people who self-identified as living with a disability became a critical inflection point. It turns out, getting the right people in the right place can change everything – or, as some of us are fond of saying, “Nothing about us without us.”

First launched as voluntary, peer-led groups for Hillel professionals who share a common aspect of their identity, the Employee Resource Groups have since grown, with programmatic and financial support from Hillel International, into a central vehicle for driving change and culture within our movement. The Employee Resource Group for People with Disabilities, which Ilya leads, brings together Hillel professionals from across our movement to create a sense of camaraderie and companionship, to drive the movement’s approach to disability inclusion, and to dispel and diminish the stigma of disability by building a community of peers who support each other and impact the movement overall.

The pandemic has shone a light on Hillel’s disability inclusion work and brought it front and center in a way many of us never anticipated. Envisioning programming that works in person, yet also translates to a virtual setting for those who can’t leave their homes? No longer optional. Designing experiences that can be universally accessible? A top priority. Finding partners who share our commitment to inclusivity? Non-negotiable.

Together, we are ensuring that people with disabilities are centered in the conversation about how best to foster a community that is truly inclusive of our identities, both during the pandemic and beyond. We are working to ensure that in every Hillel across the world, we increase accessibility, destigmatize disability, improve training and support for Hillel professionals, and most of all, infuse everything we do with empathy – all so that we can better serve the students who are at the center of all we do.

There are more than 1,200 Hillel professionals across 550 campuses and communities worldwide, and every single one of them will tell you that students come first. After all, Hillel’s mission is to enrich the lives of every student so that they can enrich the world in return. But how we approach serving that mission matters, and ultimately influences our success. How, for example, do Hillel professionals ensure that students with disabilities are more than passive participants – that their perspective is valued and integrated at every level of student leadership? What preparation, training, frameworks, and support are we offering? These factors can make or break students’ experiences and paths forward. We are beginning to address these concerns – to serve our staff so that they can serve the future of the Jewish people.

As we mark Jewish Disability Advocacy Month in 2021, we’re committed to taking the difficult lessons of this year forward with us as we plan for the future. We’re not interested in “returning to normal” post-pandemic. Instead, we’ll continue to create a reality where accessibility isn’t an afterthought, where conversations around disability and mental health awareness are destigmatized, and above all, where we take care of each other so we can take care of our students.