While climate change threatens the entire world, it also has a specific Jewish impact. In particular, Israel is a climate hotspot, threatened by desertification, flooding and other challenges. But it presents Jewish opportunities too, particularly as an issue that can bring together North American and Israeli Jews and that can engage younger Jews.

The “Unetanah Tokef” poem, famously adapted by Leonard Cohen in his song “Who by Fire,” is one of the most moving and haunting parts of the Rosh Hashanah and Yom Kippur liturgy.

This year, it struck me just how many of the causes of untimely death enumerated in it — water, fire, famine, thirst — are made dramatically more likely by climate change. 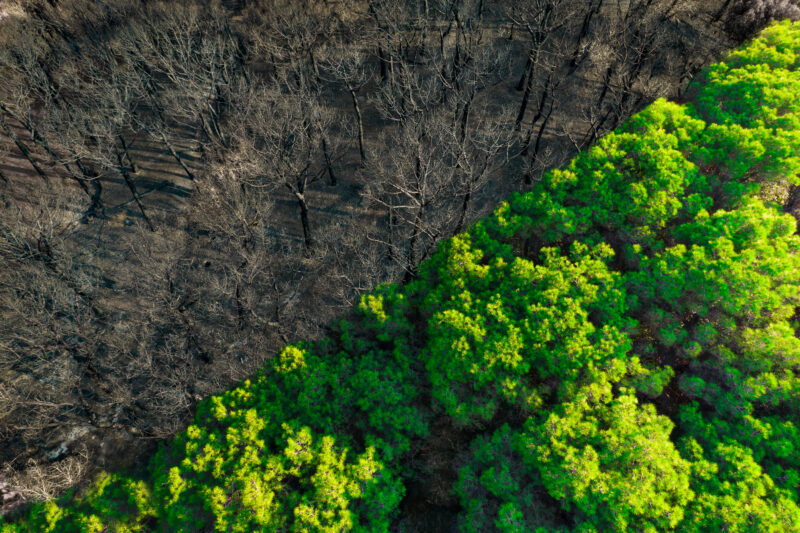 Half partition comparison of before and after forest fire in pine trees forest in the Mediterranean Sea area.

Once a hypothetical thing to worry about, climate change has become impossible to ignore, and while its effects are not shared equally, it impacts all of us. I feel it even in my comfortable suburban neighborhood in New Jersey, where each year we have to prepare for stronger and stronger storms that disrupt our power, flood our basements and sometimes kill with falling trees and flash floods.

I’m proud that my organization, the Jewish Funders Network, is one of 20 founding members of the newly launched Jewish Climate Leadership Coalition. Not only are we recognizing that climate change is a matter of moral urgency, but each member has committed to developing and implementing a climate action plan for our organizations. For many members of the coalition, these action plans will focus on reducing the organization’s carbon footprint – and that will certainly be part of JFN’s as well. We’re already greening our annual international conference, including drastically limiting the use of paper, encouraging participants to purchase carbon offsets for their travel, minimizing food waste, offering more plant-based options and limiting the use of plastic.

But as a network serving more than 2,500 funders around the world — a group we estimate collectively gives away $6 billion annually — the most important thing we can do is help those of our members who want to channel more of their resources into climate change prevention and mitigation. We are not just encouraging our members to donate more to environmental causes, but, we are offering them resources to do so as effectively and strategically as possible.

Our members in Israel are spearheading Green Funders Forum (GFF), JFN’s largest peer interest group. It’s no surprise that our Israeli members are acutely concerned by this issue; extreme climate events, from forest fires to record heat to flash floods, have become routine and deadly in Israel and present not only an economic and ecological threat but a danger to Israel’s security.

JFN’s GFF is taking a number of steps to help the funding community:

We host frequent webinars and other programs to bring together climate change funders for learning and networking. And the videos are published on our YouTube channel and available to anyone who may find them useful. One point we emphasize again and again: Climate change affects almost every other funding area and, if unaddressed, will undermine the gains you make in that area. You can address climate change even if it’s not your primary area of focus. If your foundation’s focus is on poverty, for example, it is critical to recognize that financially vulnerable populations are at greatest risk of suffering adverse health effects from pollution or having their already fragile lives disrupted by flooding and other severe weather conditions. We encourage our members to examine how climate change will impact the areas they fund and also to ensure that the projects they fund, whether new schools or job training programs, are environmentally sustainable. As GFF Co-chair Cheri Fox says, “The environment impacts every kind of funding that we do, whether our members fund in health care, education, culture, social justice or something else.  These grants provide opportunities for everyone to fine their place and to create an environmental impact through their values and areas that are most important to them.”

Our members frequently tell us they want to do more to address climate change but that the issue is so large it is overwhelming, and they don’t know where to start. That’s why we recently began offering free consulting services for funders interested in entering the area. Based in Israel (but available by Zoom to funders worldwide), our staff member, Gil Ya’acov is a seasoned environmental expert who has advised leading philanthropic foundations, including Yad Hanadiv, The Ruderman Family Foundation, The Sheli Fund, The Stein Family Fund and more. While Israel’s environmental movement is his area of expertise, he is also knowledgeable about environmental needs elsewhere. Most importantly, he is able to bring together funders with similar interests and approaches so they can partner and have a greater impact.

Mapping the Field and Encouraging Partnerships

We’re in the process of collecting information on the myriad environmental needs and funders in Israel, so that we can identify gaps and help funders avoid reinventing the wheel or duplicating efforts. In addition, our Green Funders Forum is a critical meeting place, where funders in this field can exchange information, share best practices and find people to collaborate with.

Educating People About the Jewish Impact – and Opportunities

While climate change threatens the entire world, it also has a specific Jewish impact. In particular, Israel is a climate hotspot, threatened by desertification, flooding and other challenges. But it presents Jewish opportunities too, particularly as an issue that can bring together North American and Israeli Jews and that can engage younger Jews. As a 2021 Jewish People Policy Institute paper noted, “Jews from across the globe could be mobilized for a task that transcends narrow Jewish interests: that of building an ecologically and socially responsible world or, in traditional Jewish terms: Tikkun Olam. We can draw upon the world Jewry’s financial and human resources (e.g., recruiting volunteers for humanitarian projects and professionals for tech and logistical initiatives). The climate crisis may become an opportunity for the Jewish people to heal its internal rifts through a joint effort on behalf of humanity.”

Promoting Impact Investing in Addition to, but Not Instead of, Philanthropy

For most foundations and funders, grantmaking and donations represent only a small percentage of the money within their control – the vast majority of the wealth is being invested in order to grow, or at least maintain, the endowment. The field of impact investment has grown dramatically in recent years, and it’s possible to make just as much money investing in companies that are working to combat climate change as to invest in companies that are contributing to climate change. There’s been a proliferation of startups, many of them in Israel, that are turning a profit by developing sustainable agriculture tools, expanding use of renewable energy, and other areas. JFN hosts monthly impact investing roundtables where our members exchange information about the different impact ventures they are investing in and about screening tools and other resources for evaluating companies to ensure they align with our goals and values. It’s important to note that impact investing should not be an alternative to, but rather a supplement, to our philanthropy: Nonprofits are doing important work on many fronts, including advocating governments to adopt greener policies, and they need funding to sustain their work.

Climate change is real, but we cannot let it overwhelm us or leave us passive. If you participated in High Holiday services this year, you know that Unetanah Tokef isn’t just a list of terrible fates that might befall people. The final line is, “But repentance, prayer and righteousness avert the severity of the decree.” It is too late to stop climate change altogether. But by taking critical steps, particularly by growing the amount invested in the environmental field, we can avert its severity. In doing so, we can protect Israel and the entire world.