We will “rededicate” our communities with the glow of the Hanukkah candles lighting the way forward. We will honor all those frontline responders, essential workers, clergy, educators and communal professionals who kept us alive, who sustained us and who brought us through the pandemic.

American Jews have been deeply engaged with the American story. As such, Jews have been active partners in celebrating the importance of community, especially after the country emerges from crisis. When the COVID-19 pandemic subsides, how will we encourage our people to reconnect with the communal organizations that have pulled us through, and to move, as we pray in Psalm 30, “from mourning to dancing?”

Over the course of this nation’s history, Jews have actively contributed to such public moments, including Emma Lazarus who crafted poetry, Irving Berlin and Leonard Bernstein among others who introduced music, while plays and books have paid special attention to various communal and national observances. Thanksgiving, the Fourth of July, Memorial Day, Presidents Day and more have all seen the outpouring of Jewish creative responses. 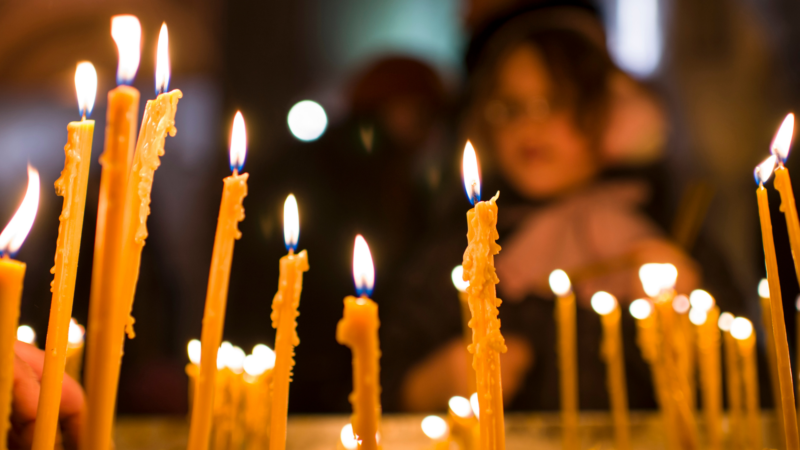 The COVID-19 pandemic of 2020-21 now joins this list of historically significant crises in American history, indeed in world history, that beg for a moment of reflection and celebration.

One such celebration, “Hanukkah Homecoming,” will be observed Nov. 28 – Dec. 5. Every Jewish organization in the world has been invited to join a global network offering local celebrations during the eight days of Hanukkah (see details below).

A sense of national pride and a feeling of responsibility define the motivations for such creative connections. Jews have used these public, secular moments to realign their Judaism with their Americanism. As a minority there has been the sense, an obligation, to give back. A form of “thank you” or appreciation defines such celebratory experiences.

Beyond patriotism, Jews have used these special times to remind their fellow Jews how blessed and proud they feel to be “an American.” Many of these gatherings have combined messages of gratitude with prayers of thanksgiving. It has afforded Jews an opportunity to also remember those whom we have lost, those who have suffered, and those who made great sacrifices in helping to defend and protect this republic.

Let us look at examples of how we in the Jewish community have marked these moments.

In 1905, the community celebrated the 250th anniversary of the arrival of Jews on this continent. Under the chairpersonship of philanthropist Jacob Schiff and a special celebratory committee including such high-profile Jewish leaders as Louis Marshall and Cyrus Adler, various festivities would be undertaken, most prominently a designated day of celebration.[1] The committee decided that the Shabbat prior to Thanksgiving in 1905 was to be a day of national Jewish community celebration with each congregation across the country invited to participate. A New York Times article summarized the festivities, while reporting on the celebratory service held at Shearith Israel Congregation, one of this nation’s oldest synagogues. A new prayer was written for that special occasion, to be recited as part of the local celebrations in every congregation in the country.[2]

In commemoration of the Tercentenary (the 300th Anniversary) in 1954, communities and organizations across the United States took the occasion to offer reflections and pay honor to this republic. Beginning already in 1951, an American Jewish Tercentenary Committee was established. Under its auspices, numerous local and national events were created, beginning on September 12th, 1954, with a “reconsecration service” hosted by Shearith Israel (N.Y.) and concluding with a “Public Assembly” held at Carnegie Hall on June 1, 1955.

Indeed, the 350th anniversary, celebrated in 2004-05, produced a broad array of activities, including a major national exhibit “From Haven to Home: 350 Years of Jewish Life in America” hosted by the Library of Congress.[3]  This exhibition featured more than two hundred treasures of American Judaica from the collections of the Library of Congress, augmented by a selection of important loans from other cooperating cultural institutions.[4] In addition, a series of live performances were offered, including “stories of Emma Lazarus, an immigrant’s daughter, who became Lady Liberty’s poet, and Irving Berlin, who emerged from the decks of an immigrant ship to become one of America’s best-loved composers.”[5] In connection with this observance, two extraordinary American Jewish histories were released: Brandeis University professor Jonathan Sarna published American Judaism: A History (Yale University Press, 2004) and NYU professor Hasia Diner’s The Jews of the United States, 1654-2000 (University of California Press, 2004).

With the onset of the Civil War, American Jews “actively supported their comrades in arms” and committed to various volunteer activities. Lee’s surrender at Appomattox Court House on April 9, 1865, coincided with the start of Passover. As Jonathan Sarna noted: “The victory of the Union forces seemed to the faithful almost providential.” Likewise, Southern Jews, following the War, “turned out together as a community to celebrate Confederate Memorial Day and set aside special sections of their cemeteries for Confederate war victims.”[6]

But even more profound were the memorials, eulogies and expressions of loss on the occasion of President Lincoln’s assassination in April of 1865. In Dr. Gary Zola’s documentary history, We Called Him Rabbi Abraham: Lincoln and American Jewry, he accounts for the sincere outpouring of respect and love demonstrated by 19th Century Jews for Lincoln at the time of his death and the on-going efforts to memorialize and honor his imprint on America.

In November of 1918, as the First World War concluded, such an occasion warranted a patriotic response. Many rabbis offered special sermons in recognition of the end of the War and the return of our heroic service personnel.[7]

While there appears to be no specific event marking the end of the so-called “Spanish Flu,” Jewish communities did mobilize to meet the needs of Jews and others who were adversely impacted by this pandemic. The Atlanta Jewish Times describes the extraordinary work of the American Jewish Joint Distribution Committee (JDC) during the two-year period of this pandemic.[8] Similarly, the Dayton Jewish Observer reported on the extraordinary efforts of Jewish doctors in treating patients and the significant work of the Jewish Welfare Board in assisting U.S. military personnel during this period.[9]

Historian Beth Wanger in her book, New York Jews and the Great Depression, Uncertain Promise (Yale University Press, 1996), noted that congregations developed a mobilization campaign toward the end of the Depression to promote and encourage re-affiliating with synagogues.

A more recent celebration, known as “Rescue Day of European Jewry,” has been set to mark the liberation of Europe’s Jews following the defeat of the Nazis.[10] Inspired by Russia’s “Victory Day” noting the anniversary of Germany’s surrender to the Allied Forces on May 9th, 1945, this ceremony was introduced in 2014 by former members of the Jewish Red Army, now living in Israel and the United States.

The origin story of a Jewish “homecoming” celebration is a story of relationship, yearning, and serendipity. Recovering from a paired kidney donation and transplant at the Mayo Clinic in Rochester, Minnesota, Ron and Susie Wolfson were locked down by the pandemic in the spring of 2020. To pass the time, they watched “Queer Eye,” a reality series on Netflix. In the intriguingly titled episode “God Bless Gay,” the subject of the episode is Tammye, an African American woman who lives in the town of Gay, Georgia. An active volunteer in her church, she requests the five stars of the show put the finishing touches on the new community center of her church since the big “reveal” of her makeover will be at the annual “homecoming” event on Sunday. “Each year, most country churches have the homecoming,” says Gene, a white neighbor who nominated Tammye for the show, “and they’re askin’ ones that haven’t been in a while to come on back, and socialize and maybe get encouraged to start attending church again.” (11).

Motivated by the show, Ron began researching the origins of “homecoming.” According to University of Louisville Professor Yvonne V. Jones in her seminal research paper, “Kinship affiliation through time: Black homecomings and family reunions in a North Carolina County,” (12) homecoming developed in the rural South during the late 1800’s. Her ethnographic study of the small community in Gorgus, North Carolina, reveals that the families in the area gathered annually for a church-based reunion after worship services on the second Sunday of September.

These gatherings were not religious per se; rather they were celebrations of relationships between current and former members of the community and with the church itself.

The homecoming ceremony was highly structured: a welcome from the lay master of ceremonies and the local minister, singing, children reciting poetry and a speaker, often a guest pastor from another community. Visitors were warmly welcomed and encouraged to introduce themselves. Letters from those not able to attend were read. A potluck supper was enjoyed by all. The atmosphere was festive, a celebration of kinship among families and friends and a reminder of the affective ties to a specific locale.

Moved and inspired by this research, Ron began circulating the idea of a “homecoming” gathering to a number of Jewish community leaders well before the vaccination rollout. With its themes of rededicating sacred community and bringing light into the darkness, along with widespread observance among American Jews (eight in ten own a menorah)[13], Hanukkah was an obvious choice for a moment that would be singularly focused on “recounting the things that befell us.” When community leaders in Australia, Hong Kong, Israel, Europe, South Africa, the United Kingdom, South America and Canada heard about the idea, their enthusiasm broadened the initiative to include the world Jewish community. Within a few months, nearly every denominational synagogue and independent minyanim movement, Jewish community centers association, day schools, federations, Jewish professional networks and outreach organizations endorsed the concept.

Hundreds of Jewish organizations throughout the world are offering local gatherings under the “Hanukkah Homecoming” banner, sponsored by the Kripke Institute’s Center for Relational Judaism and supported by a JCRIF grant from the Maimonides Fund, the Jim Joseph Foundation and the Charles and Lynn Schusterman Family Philanthropies. Sign-ups are happening now at hanukkahhomecoming.org. Participating organizations are posting their events at a searchable database powered by the OneTable platform enabling those looking to join in a celebration of the holiday either onsite or online to find a gathering – connect.hanukkahhomecoming.org. A social media campaign will invite those connected and not-yet-connected to look again at the value proposition of a relational Jewish community whose sponsoring organizations will be welcoming back and welcoming in, a worldwide Jewish communal “open house.”

Reunion, renewal and remembering collectively what we have lived through – these are the themes of “Hanukkah Homecoming.” We will “rededicate” our communities with the glow of the Hanukkah candles lighting the way forward. We will honor all those frontline responders, essential workers, clergy, educators and communal professionals who kept us alive, who sustained us and who brought us through the pandemic. We will join the long American tradition of marking our emergence from crisis to a new day of light and hope.

Ron Wolfson is the Fingerhut Professor of Education at American Jewish University in Los Angeles, California, and the president of the Kripke Institute.