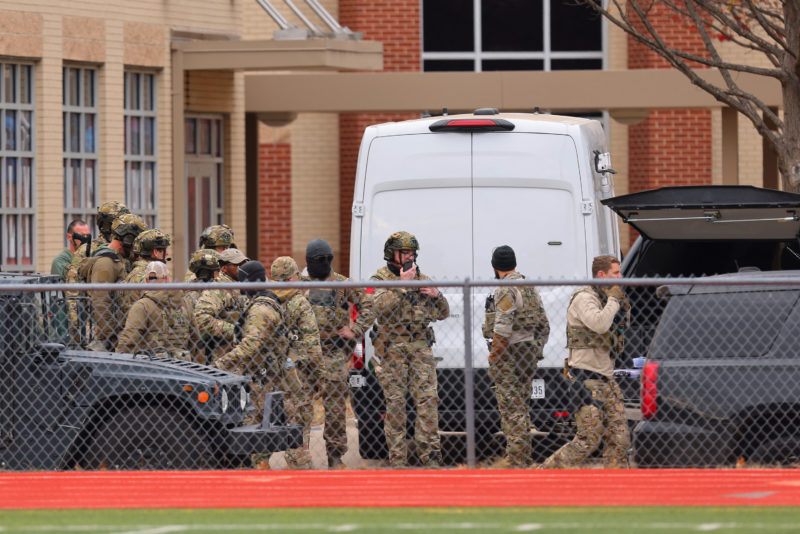 As they look back on the hostage situation at a synagogue in Colleyville, Texas, last Saturday, Jewish security officials find themselves caught between two conflicting reactions.

On one hand, the incident was a “success story” for Jewish security groups: The rabbi and worshippers at Congregation Beth Israel received training from experts and, in the face of a gunman, used the lessons from those trainings to escape unscathed.

But the attack exposed gaps in a national Jewish security infrastructure that, more than a decade after its founding, still does not cover broad swaths of American Jewry. Now, national groups are making a renewed effort at getting security funding from the government and private donors to smaller Jewish communities.

And while other recent attacks on Jewish institutions have been mass shootings, security watchdogs say a hostage situation presents confounding new questions.

“There are four people who are alive today who very easily could not have been, so it’s a success story for everyone,” Michael Masters, CEO of the Secure Community Network (SCN), which was founded in 2004 and coordinates security for Jewish institutions, told eJewishPhilanthropy. But he added that people trained to look for signs that a visitor to synagogue is disturbed or unstable might be thrown off if a potential assailant displays a pleasant and friendly demeanor, as was the case on Saturday in Colleyville.

“Particularly given the diversity within our community, we want to make sure that people are not devolving toward looking at simple appearance to make judgments,” he said. “There’s no hypothetical model that allows you to set an equation.”

That the gunman made it into Congregation Beth Israel at all means that synagogues need to be paying more attention to their access points, said Yehudit Barsky, one of SCN’s founders. “The goal of security for the Jewish community is to keep perpetrators and/or people who are surveilling Jewish institutions from getting in in the first place,” she said.

The question of how to balance being warm and welcoming with deterring attackers has bedeviled congregations for decades, particularly since the 2018 attack on a synagogue in Pittsburgh. Some worry that posting a guard outside their door will drive away worshippers, while others simply can’t afford that level of security. Barsky said that giving security training to congregants who have a better sense of who’s coming to synagogue is a good way to thread that needle.

“Hiring a security officer to be at your door is a nice thing if you have the money for it,” said Barsky, a research fellow at the Institute for the Study of Global Antisemitism and Policy. “The people who know who does and does not belong are the congregants. If you’re a congregant and you’re trained properly, you can still be welcoming and still say hi.”

The Community Security Service, which is based in the New York City area, focuses on training ordinary congregants as guards, and has grown quickly since mid-2020, increasing its annual budget from $360,000 in 2019 to $2 million, and almost doubling the number of synagogues it works with, to nearly 200.

The organization was founded to focus on the New York metro area, and most of its client synagogues are located there. Its roster is also heavily Orthodox. Evan Bernstein, the group’s CEO, said he’s focused on recruiting synagogue volunteers across the country, and is also hoping to hire five new employees outside the Northeast, expanding the staff from 11 to 16.

But he said many synagogues are still ambivalent about beefing up their security. Synagogues are especially wary of deterring people from coming during the pandemic, when attendance is already low.

“The threats are all the time and can happen anywhere, and we need to maintain a level of diligence when the news cycle ends in Texas,” he said. “I still have conversations with community leaders, synagogue leaders around this country that just are really reticent to have real security conversations. There’s still a fear of blocking congregants from coming into synagogue, which I understand. Right now, with COVID and everything else, keeping congregants actually coming to shul is as difficult as it’s ever been.”

Another effort to bolster security in smaller communities is LiveSecure, an initiative from The Jewish Federations of North America (JFNA) that aims to raise a total of $126 million over three years for smaller Jewish federations to hire security personnel and build security plans for their communities. The money is divided into $18 million for the Secure Communities Network to aid smaller Jewish communities and $36 million in JFNA grants to local federations that are intended to be matched two-to-one (for an additional $72 million).

The funding is coming from 25 private donors and foundations, including the Schusterman Family Philanthropies, the Jim Joseph Foundation, Crown Philanthropies and Julie and Marc Platt, the film producer. That funding is on top of the estimated $30 million a year already spent by federations on security.

JFNA is also urging the federal government to double the total amount of security grants it gives to religious institutions and nonprofits, from $180 million to $360 million. The federal government approved less than half of the applications it received for the program last year.

Congregation Beth Israel, in Colleyville, was in touch with a Jewish security director in the Dallas-Fort Worth area, and participated in trainings from the Anti-Defamation League and SCN. JFNA CEO Eric Fingerhut told eJP that synagogues across the country should follow that example, but that smaller communities may not have the budgets to provide a similar service.

“This is a very expensive element of Jewish life now, we’re talking just to have the professional security programs, to do all the trainings,” he said. “It’s a big investment. It’s harder to generate the resources.”