Bennett spokesperson says the agreement is ‘being discussed’ 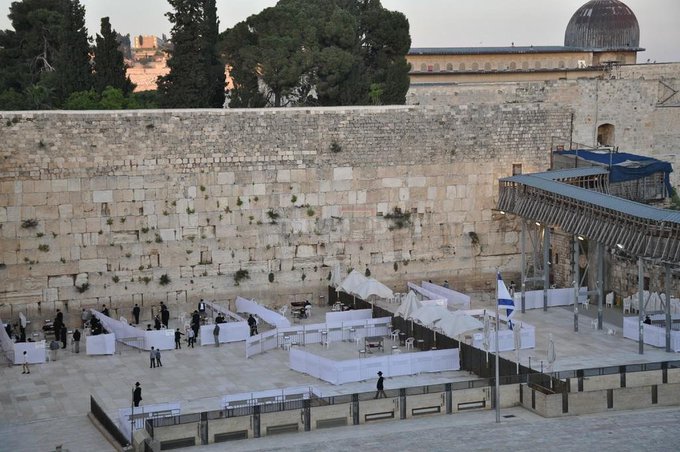 Israeli Diaspora Affairs Minister Nachman Shai said Wednesday that he doesn’t accept any stalling on advancing a deal for a state-recognized egalitarian prayer section at the Western Wall, following a report that Israel has frozen its implementation — news that has troubled some religious leaders in the U.S.

According to Zman Israel, the Hebrew-language sister publication of the Times of Israel, Israeli Prime Minister Naftali Bennett and Religious Affairs Minister Matan Kahana decided to “freeze” the implementation of the plan, which was part of the coalition agreement between the Labor party, of which Shai is a member, and Foreign Minister Yair Lapid’s Yesh Atid party. The deal is also a promise that has been made to diaspora leaders, who have been repeatedly let down on the issue.

“[The report] was a surprise, although I was aware that the decision was not coming soon, yet I don’t accept it and I will do my best to advance the cabinet resolution about the Kotel — I see no reason to wait,” Shai told JewishInsider.

A spokesperson for Bennett told JI that “no decision was made of the sort described in that report.” When pressed on whether the deal is still going ahead as planned, the spokesperson said that “it’s being discussed.”

“I understand the pressures from inside and outside — I believe I am aware of them, and I don’t underestimate them — but if it is not now, it is probably never, and this is the coalition and government that is able to make the necessary changes,” Shai said. The current coalition does not include any of the ultra-Orthodox parties, which have voiced fierce opposition to allowing mixed-gender prayer at the wall.

The deal has been in the works for years and was approved by then-Prime Minister Benjamin Netanyahu’s government in 2016, before being shelved the next year due to friction with ultra-Orthodox coalition partners.

Shai makes a point of calling the agreement the “Netanyahu outline,” to highlight his opinion that Netanyahu, now opposition leader, and his party shouldn’t be opposing the deal. “Will Netanyahu vote against Netayahu’s outline, and if so, why?” he asked.

“Netanyahu is now building a certain coalition against the Kotel deal with the ultra-Orthodox parties,” Shai added.

Rabbi Ammiel Hirsch of the Stephen Wise Free Synagogue in Manhattan told JI he was “disappointed” but not surprised by the report that the government had frozen the plan, particularly coming just days after positive discussions he and others had with Shai on the subject in New York.

According to the Zman Israel report, Kahana told aides over the weekend, “We have decided to not deal with this now, period.”

“The Western Wall compromise has become a focus for incitement and hatred, especially by people from Likud, who are latching onto it. We cannot play into their hands. We’re freezing everything at the moment. We’re not touching it,” Kahana said.

Kahana’s office issued a clarification following the publication of the report saying, “The minister is not dealing with the issue and it is not in his authority. The quotes attributed to the minister were taken out of context. The matter is on the desks of Cabinet Secretary Shalom Shlomo and President Isaac Herzog.”

“After promising to implement the Kotel agreement, it’s the second time the Israeli government is reneging,” Hirsch said. “If you succumb to threats of violence, then in fact, you’re letting the extremists determine policy.”

“It’s imperative that Israel provide the necessary resources to guarantee the right to peace and security for all worshipers in the single holiest place for Jews,” Rabbi Jacob Blumenthal, CEO of the Rabbinical Assembly and the United Synagogue of Conservative Judaism, said in a statement on Tuesday. “We expect the government to uphold its promise of religious pluralism in Israel and specifically of an egalitarian prayer space at the Western Wall. We call on Prime Minister Naftali Bennett and Foreign Minister Yair Lapid to meet this obligation and to quickly carry out the Kotel agreement, first agreed to four years ago, and under the previous government, no less.”

At a Yesh Atid faction meeting this week, Lapid indicated that the deal will not be implemented in the near future, saying, “I support the compromise, but not everything can be done at once. We have four years during which we will advance many great things.”

But some members of diaspora Jewry are tired of waiting for this agreement to be advanced. “As a movement, we waited patiently for the formation of the new administration. We then experienced delays during budget negotiations. And again, waiting for the budget to be approved. There can be no more excuses for delaying implementation of the Kotel agreement. We cannot be swayed by threats of violence and should not let voices of extremism delay the establishment of a place for all Jews to feel at home at the Kotel,” said Blumenthal.

Earlier this week, at the six-month mark of the new unity government, Shai tweeted, “we have worked for the benefit of underprivileged populations and the periphery, we have advanced changes in priorities, we have done and more will be done. But a government that wants to last, is advised to learn to respect coalition agreements first.”

“My position is that we should continue and we shouldn’t stop — if we take a break it should be as soon as possible. I see no reason to stop it,” Shai told JI.

“I hope it will happen in the [government’s] first year and not the second or third,” Shai said, noting that nothing has changed since the agreement was passed as a government resolution in 2016.

Shai, however, noted that the ball ultimately lies in Bennett’s court. “I don’t dictate timetables to the government  — I’m not the prime minister.”

“Our goal is to let everyone have a piece of the Kotel,” Shai said. “Most of the Kotel is separate for men and women — we have to give a spot where men and women can pray together as they are used to. That’s their Jewish way and we should respect it.”