Those who believe that Israel has no right to exist and actively seek its destruction are, almost by definition, opposed to the people Israel represents and welcome their annihilation. Hatred of the Jewish nation-state is intrinsically linked to hatred of the Jewish people.

A soldier’s worst nightmare is the enfilade. It’s a battlefield covered by not one but several enemy machine guns with overlapping — enfilading — fields of fire. Advancing into that hailstorm, a soldier is highly likely to get hit. And millions were, in World Wars I and II. Today, though, enfilade precisely describes the dangers faced by Jewish communities across North America. They are caught in a crossfire of multiple racist groups, each of which seeks to attack Jewish institutions and kill the innocent people inside them.

While white supremacists take aim at African, Latin and Asian Americans as well as at Jews, they alone, are targeted by radical left-wingers, Islamists and other antisemites. That enfilade increasingly threatens the security of synagogues, community centers, Jewish schools and even kosher restaurants. Any one of these sites could be attacked by a wide spectrum of murderers — Nazis, anarchists, Jihadis — at any time. 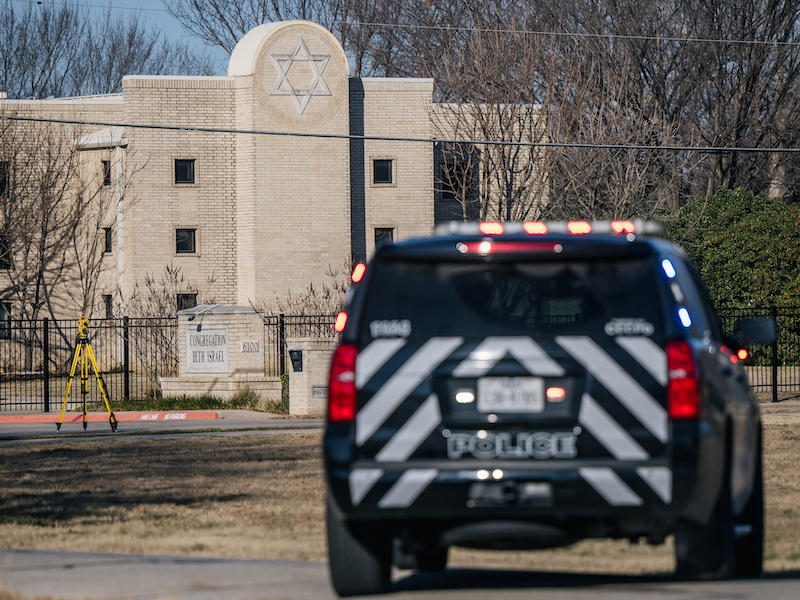 Though they account for only 2% of the US population, Jews are the victims of 60% of all religious-based hate crimes. In 2021, alone, there were 2,171 antisemitic incidents in the United States — an increase of 34% over the previous year, according to the Anti-Defamation League. Over a quarter of these attacks were directed at Jewish institutions, a 61% increase. Though most of the perpetrators belonged to white supremacist groups, a growing number — 345, nearly double that of 2020 — were anti-Zionists.

That statistic, perversely, makes sense. Those who believe that Israel has no right to exist and actively seek its destruction are, almost by definition, opposed to the people Israel represents and welcome their annihilation. Hatred of the Jewish nation-state is intrinsically linked to hatred of the Jewish people.

Anti-Zionism, recognized by the Anti-Defamation League as synonymous with antisemitism, is rapidly rising in the United States. There are many causes for this increase, not the least of which is the influence of the mainstream media. Take, for example, the recent “investigations” of CNN, The Washington Post, and the The New York Times into the death of al-Jazeera journalist Shireen Abu Aqleh, a Palestinian-American shot during a gunfight between Israeli soldiers and Palestinian terrorists in Jenin. Though the Palestinian Authority refuses to release the bullet which would establish without question which weapon fired the fatal round, and though Israel has yet to conclude its internal investigation, all 3 media outlets found Israel guilty. None of the outlets, moreover, has bothered to investigate the nearly 2,600 journalists killed in war zones since 1990, among them eleven al-Jazeera reporters who died covering Arab civil wars. The singling out of Israel and holding it to uniquely harsh standards is, according to the International Holocaust Remembrance Alliance, antisemitic.

History shows us that dehumanization — labelling certain racial or religious groups cockroaches or rats — is an essential precondition for genocide. So, too, the delegitimization of Israel in the United States can legitimize violence against American Jews.

The alarming extent of the danger was recently demonstrated by BDS, the movement that works to eradicate Israel through boycotts, divestments and sanctions. BDS has so far failed spectacularly — Israel is less isolated than ever and its high-tech economy is booming. But that did not prevent the organization from publishing an interactive map of “Zionist leaders and powerhouse NGOs” in the Greater Boston Area. The goal was to expose “local institutional support for the colonization of Palestine” and reveal its connection to “policing, US imperialism, ableism, ecological harm, gentrification, displacement/ethnic cleansing [and] the prison-industrial complex.” In other words, all of America’s woes stem from support for Zionism — a classic antisemitic trope. And if that weren’t abhorrent enough, BDS supplied the names and addresses of dozens of Jewish institutions — schools, synagogues, charities, newspapers and art centers — along with those of their directors. What are the chances that one or more of those sites, and the people associated with them, will be attacked?

That is just one of many questions that must be asked. Another is: why is BDS still legal when a racist group that published a map of another minority’s churches and schools would likely be outlawed? More crucially, though, American Jews must ask themselves “how can we best defend ourselves and our families’ institutions?”

The answer lies in support for the Secure Community Network, a committed force of more than 50 former police and federal law enforcement officials who constantly monitor antisemitic threats to some 12,000 Jewish centers of life throughout North America. Operating under The Jewish Federations of North America, SCN works closely with state and Federal law enforcement agencies, sharing information and coordinating responses. It instructs Jewish communities and their leaders how to deal with real-life threats. SCN training prepared members of Congregation Beth Israel in Colleyville, Texas, to escape an active shooter, saving many lives.

American Jews indeed face an enfilade of hatred and violence, but unlike the poor soldiers of the past, they have access to potentially lifesaving protection. They need only support the SCN and avail themselves of its services.

Michael Oren, formerly Israel’s ambassador to the United States and deputy to the prime minister, is an adviser to SCN, the secure community network. His next book is Swann’s War.