Crossing the sea and journeying through the wilderness: Embracing women’s history through the lens of Passover

Women’s History Month, like the story of the Exodus, speaks of the urgent necessity for change 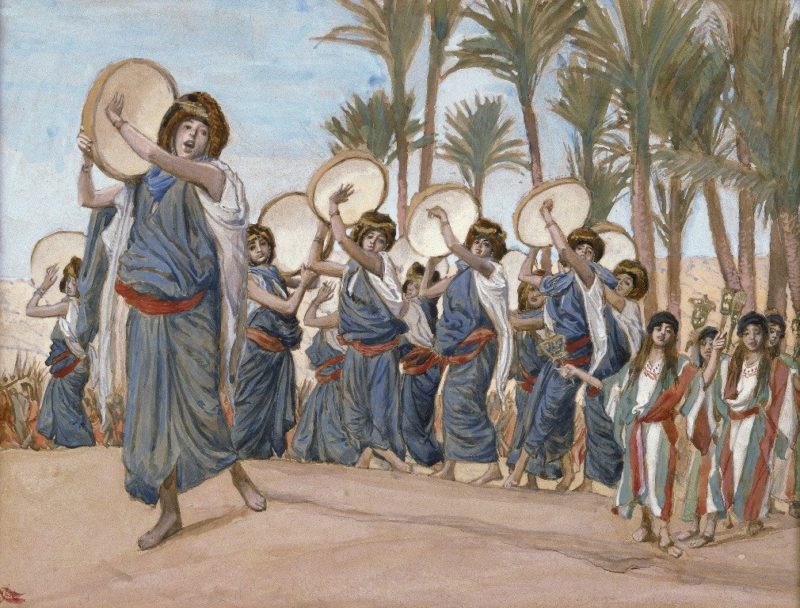 You might think March would be the highlight of my year. After all, I’m a historian of women and gender, and in March – Women’s History Month – the kind of work I do every day with my colleagues at the Jewish Women’s Archive is suddenly lifted up all around us, in articles, commercials, special shows, and podcasts. The virtual pages of this very publication have highlighted women this month through excellent articles on investing in a global sisterhood and creating equitable workplaces. While I love this burst of enthusiastic attention to women’s stories, there’s something a little disconcerting about Women’s History Month in the 21st century.

There’s no doubt that something powerful happens when we focus on women’s lives as a distinct, worthy, and relevant topic, moving them “from margin to center,” as feminists have long advocated. The problem is that focusing on women for a dedicated month doesn’t necessarily move women’s history to the center; it moves it to March. Women’s history remains in a ghetto of sorts, still segregated from what we call “History” the rest of the year.

This year, the arrival of the Jewish month of Nissan and the holiday of Passover within March suggests a different approach to Women’s History Month. Nissan, with its themes of springtime renewal and new beginnings, and Passover, with its focus on the journey toward liberation, heighten the message of Women’s History Month: that centering the stories of those on the margins is not meant to be a temporary fix but rather a fundamental reorientation and the invitation to a process of transformation. Women’s History Month, like the story of the Exodus, speaks of the urgent necessity for change, setting us on a path that extends far beyond the month of March or the holiday of Passover.

On Passover, we tell the story of the departure from Egypt, including the dramatic miracle at the Sea of Reeds, when the water parted to reveal a previously unimaginable route out of slavery and toward the Promised Land. When we sing Dayenu at the seder, we claim that each miracle of the Exodus story would have been sufficient. “If God had split the sea for us and not taken us through it on dry land, Dayenu! It would have been enough for us.” With all due respect and gratitude for any and all of God’s miracles, I would like to offer a challenge:  It is not enough to witness the parting of the Sea of Reeds if you do not walk through to the other side.

For too long, during Women’s History Month, we have exclaimed over the new perspectives and opportunities that the figurative parting of the sea offers, only to watch from the Egyptian shore and return to life as usual as the walls of water release and the sea refills over that path to a new vision of history. Perhaps the message of Dayenu is that we cannot rely only on the miracles of God to take us each step of the way. If the path is open before us, it is our responsibility to walk on it. True, that path takes us into unchartered territory, wilderness. But that vast, open space on the other side of the sea creates the possibility to write a new story.

Passover itself provides the model. When the holiday ends and we return to our leaven-filled lives, we do not pack the story of Passover away with our Haggadot. Rather, we continue to recall the Exodus in our liturgy, weaving the story of redemption throughout the year so that we might integrate its lessons into our daily lives.

Gerda Lerner, a pioneer of the field of women’s history, was the “mother” of Women’s History Month – she created the institute which sparked the first National Women’s History Week, the precursor of Women’s History Month. In her autobiography, Fireweed, she recounted how her own experience as a refugee from the Nazis helped her perceive the invisibility of women’s history and understand the devaluation of the experience of half the world’s population. Her personal Exodus story enabled her to imagine a much broader escape from the constricting patriarchal view of world history, and she invited others to travel and imagine with her. Lerner argued that omitting the stories of women and minorities from historical narratives distorts our understanding of social change in the past and undermines our ability to make social change in the present. She believed in the possibility of a better future and the role of women’s history in helping create that future, as she wrote, “The system of patriarchy is a historic construct; it has a beginning; it will have an end … What will come after, what kind of structure will be the foundation for alternate forms of social organization we cannot yet know. We are living in an age of unprecedented transformation. We are in the process of becoming” (The Creation of Patriarchy, 1986).

As Women’s History Month draws to a close and Passover begins, I hope we will carry forward the stories of women and others on the margins as we collectively journey toward liberation. By accepting the invitation to cross the sea and find our way through the wilderness, we can chart a redemptive future together.

Judith Rosenbaum, Ph.D., is the CEO of the Jewish Women’s Archive.