In her new role, Clara Scheinmann plans to score points for the Jewish people 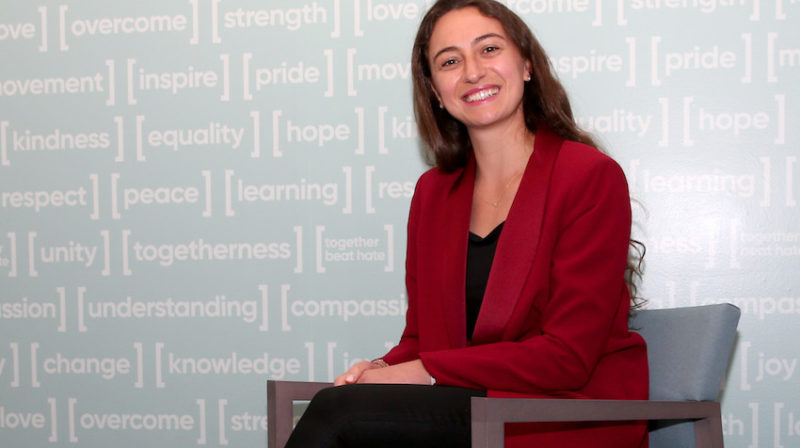 The early days of a new job are often stressful, but Clara Scheinmann’s first week at the Foundation to Combat Anti-Semitism was a trial by fire.

Hired as the foundation’s director of programs and strategy, with a mandate to use social media to fight antisemitism, Scheinmann came on board on May 11 — the day after fighting erupted between Israel and Hamas, spurring both antisemitic violence and a surge in online hate. On her first day, she saw that the foundation’s “command center,” which tracks more than 300 million websites, was showing a sharp spike in the frequency of such terms as ethnic cleansing, genocide and apartheid.

“I took that deep breath, and knew that there wouldn’t be a better time than now to be doing this kind of work,” Scheinmann said.

She and the foundation responded to the situation under the umbrella of their existing social media campaign, Together Beat Hate, or [tbh], which launched last summer. They created several social media posts that tried to cool the online temperature by urging social media users to be leery of simplistic rhetoric. Now, the cease-fire between Israel and Hamas called on May 21 is holding, and Scheinmann says the experience has accelerated her thinking about the foundation’s strategy.

“This is a football analogy,” she said, evoking Robert Kraft, owner of the New England Patriots, who founded the Foundation Against Anti-Semitism in June 2019. “I feel like right now we’re on defense. The Jewish people [are] on defense, and our defense is a little slow. The only way to win the game is to score points.”

Born and raised in Boston, Scheinmann graduated from George Washington University in 2013 with a bachelor’s degree in international relations and affairs, and always felt a sense of responsibility for the Jewish people and the state of Israel that she attributes to her family history.

All four of her grandparents were refugees. Her mother was born in Tunisia, and immigrated to France as a young child with her parents. Her paternal grandmother was a member of Great Britain’s Royal Air Force, and her paternal grandfather, Andre Scheinmann, was a French partisan who led over 300 spies and sabotaged rail lines. He was arrested and spent years in prison before being liberated by American forces at Dachau. She grew up speaking French at home; learned Hebrew at Jewish day school and also studied and speaks Italian, Portuguese and Spanish.

“This job does feel like a passing of the baton, although it’s an arena that looks very different from that of my grandparents,” Scheinmann said.

Together Beat Hate is the foundation’s first public initiative, based on research it conducted that found that 35% of people between the ages of 18 and 35 don’t know that antisemitism is a problem.

“That’s where we think the opportunity is — those people in the middle who are impressionable and don’t have that awareness,” Scheinmann said.

Together Beat Hate has published almost 500 pieces of social media content since its launch.

Kraft announced the formation of the foundation during the speech in which he accepted the Genesis Award, a $1 million prize most often awarded to wealthy members of the Jewish community who then use the funds to support existing philanthropic efforts or create new ones. Kraft committed $20 million to the foundation, which now has about $50 million in funding, including $30 million from other donors, Scheinmann said.

Scheinmann had come into contact with the Kraft family both as social secretary at the Israeli consulate in Washington, D.C., under former Ambassador Ron Dermer, and during her five years at MassChallenge, a nonprofit the Kraft family has supported that helps entrepreneurs start companies.

“All of us at Together Beat Hate, the Foundation to Combat Anti-Semitism and my family have been energized by Clara’s passion and sense of purpose,” said Josh Kraft, Robert Kraft’s son and the president of Kraft Family Philanthropies.

Having experience working with startups will serve Scheinmann well at the Foundation to Combat Anti-Semitism, Dermer said. “With so much antisemitism now moving online, we need innovative initiatives to combat it — initiatives that Clara can help develop and promote,” he said.

Scheinmann said the Foundation to Combat Antisemitism approached her about the position, and she felt compelled to take it.

“This was my time to take on a big problem,” she said. “And I’m not doing this alone.”

Scheinmann’s passion for the job was clear to Siobhan Dullea, the CEO of MassChallenge.

“I didn’t even have to talk to her about why she was going,” Dullea said. “[Scheinmann] just said, ‘This is what I was meant to do.’”

Before Scheinmann left her role as director of ecosystem management at MassChallenge, she was helping aspiring entrepreneurs build relationships. She also gained some practical experience in social media there. It wasn’t central to her job, Dullea said, but as a medium-sized nonprofit, MassChallenge’s entire staff helped amplify its messages through social media.

At the foundation, Scheinmann doesn’t create digital content herself, but oversees the staff who do — mostly for Instagram, but also Twitter and Facebook. The posts that generate the most engagement tend to grab people’s attention by including something they already know or identify with, and then use that as a point of departure for new information. One such post, about Audrey Hepburn, revealed that the movie star participated in the Dutch resistance against the Nazis.

The team’s efforts to push back against the demonization of Israel during the conflict with Hamas taught Scheinmann that while the strategy still emphasizes the production of its own social media content, it also needs a “real-world” component that harnesses the power of online influencers and might include events or a college campus fellowship.

“People listen to people,” she said. “It doesn’t have to be Kim Kardashian.”

She’s also grappling with the complexities of the internet, such as the fact that much of the online discourse she wants to help shape is driven by anger, which creates the challenge of reaching people without feeding dangerous emotions.

In confronting these difficulties, Scheinmann feels inspired by her work with entrepreneurs at MassChallenge. She learned from them to approach the work by focusing on the problem to be solved.

“The hardest part of being in this job is knowing that I will not be the person who solves antisemitism,” she said. “What I saw in those startups was that they dared to try.”