May his memory be a blessing

Breathe to the pain: A gratitude piece to Rabbi Lord Sacks z”l

February 2002, I had undergone an emergency Caesarian and borne Carmel, our first child, at Mount Scopus hospital in the midst of the second intifada and a particularly stormy and miserable month in Israel. A terrorist attack had postponed what was an unanticipated operation. Lying in bed post-op, exhausted and shaken I was in no place to move. A broad-shouldered Russian nurse entered and said to me sternly, “I was born in a bucket in Siberia. Breathe to the pain and get up and walk.” I did. It worked.

In hindsight, I understood that breathing to the pain was more than an answer to major abdominal surgery; my nurse had given me a way to be in the world. 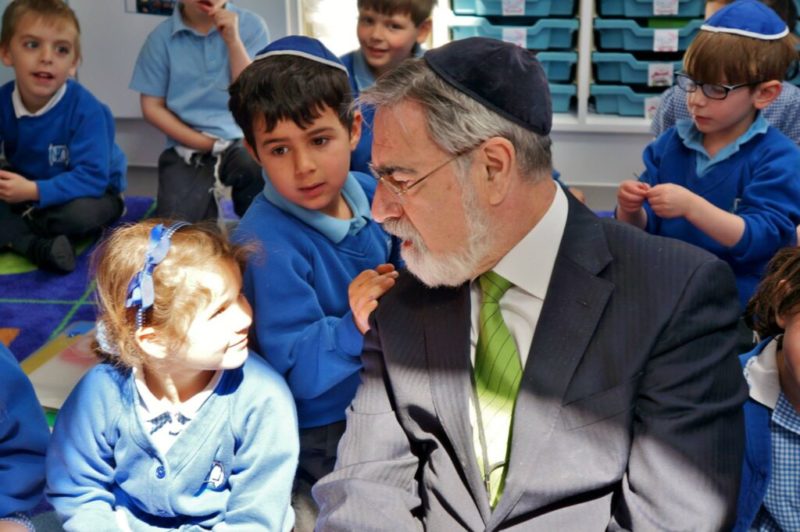 In this vein, a year following his untimely departure from us, I come to write a gratitude piece to the wisdom of Rabbi Lord Sacks z”l.

Growing up in Orthodox Jewish North West London in the 80’s and 90’s I experienced a strict theological and religious order to things revolving, in the main, around divisions regarding God and humanity, insider and outsider, Judaism and the world, friend and foe. God was omnipotent and humans lacked the power to make a difference. Jews were the Chosen ones in contrast to others, and, therefore, ours was the religious truth. To be Jewish and stay Jewish, Jews needed to remain within the four walls of our own religious communities.

We were in some way born into an intellectual and spiritual split that kept the negative, complicated or embarrassing stuff out and, as Tevye would say, “far away from us.” We need not breathe to the pain because the pain was not part of us.

The Austrian-British Jewish psychoanalyst Melanie Klein, through her work with children, in the early 20th century, described this kind of splitting as the paranoid-schizoid state; taking the bad parts experienced in our relationships with our parents and splitting them off so that they do not connect to us. We split the bad part off as a way of avoiding the pain of reconciling it as part of our own reality. There is, however an alternative state that occurs with maturation and self-work which Klein termed the depressive position. The depressive position integrates previously separated feelings such as love and hate, hope and despair, acceptance and rejection into a more integrated whole. It is termed such because:

Giving up the comforting position of self-idealization, and facing the complexity of internal and external reality inevitably stirs up painful feelings…it is these feelings that give rise to repair.[1]

Over these past many months after the passing of Rabbi Sacks, I have come to realize that the sorrow I have felt is a coming to terms with the loss of a rabbi who gave us the possibility of living our lives in full. Wherever he intellectually traveled in his works, from the parsha to politics to science and wherever they met us, from his Ted Talk to Thought of the Day, all were profoundly radical in that they resisted the split and held the possibility and promise of integration. In doing so with courage and grace, Rabbi Sacks helped us recognize and work with our own vulnerabilities; our desires to avoid responsibility for what happens in our families and communities, our fear of not having all the answers, our own religious egos. Rabbi Sacks helped us face ourselves; he gave us permission to breathe to the pain.

Repeatedly Rabbi Sacks charged us to be partners with God in bettering society, to take responsibility for the world in which we live because, “God needs us to act so He can act through us… faith does not mean leaving everything to God.”[2] Rabbi Sacks called upon us to value diversity, to recognize that our own self-centeredness can serve as an obstacle to greater wisdom when he writes, “We encounter God in the face of a stranger. That, I believe, is the Hebrew Bible’s single greatest and most counterintuitive contribution to ethics. God creates difference; therefore it is in one-who-is-different that we meet God.”[3] Here Rabbi Sacks is asking us to appreciate that not all truth belongs to us, that not knowing is a pathway to growth and that the face of a stranger holds in it the possibility of insight and illumination. While holding us accountable to our religious commitments, Rabbi Sacks made sure that we were not hiding behind them as a defense against real human contact, to avoid the rub of relationship, “Faith is not measured by acts of worship alone. It exists in the relationships we create and it lies deep in our moral commitment.”[4] In these examples and many more, Rabbi Sacks pulls us into our own humanity, our frailty and our enormous strength.

Almost a year ago now, as we prepared a memorial for Rabbi Sacks’ at Masa Israel Journey, a colleague and I talked about our experiences learning from Rabbi Sacks. As we exchanged memories, something happened between us. Between the unspoken words, we articulated how much lighter it felt that Rabbi Sacks had seen us, a benevolent adult in the battle lines of our early adulthood who said, just at the right time; it need not be this way; you do not have to choose. It may be messier, less idealized, less black and white – but truer, more honest, more resonant, more humane. Breathe to the pain. That is the way to heal your fractured worlds.

Sarah Mali is vice president of leadership & impact and head of the Masa Leadership & Impact Center at Masa Israel Journey. Sarah can be reached at sarahm@masaisrael.org.

[3] The Dignity of Difference, How to Avoid the Clash of Civilizations, Bloomsbury 2003, pg. 59